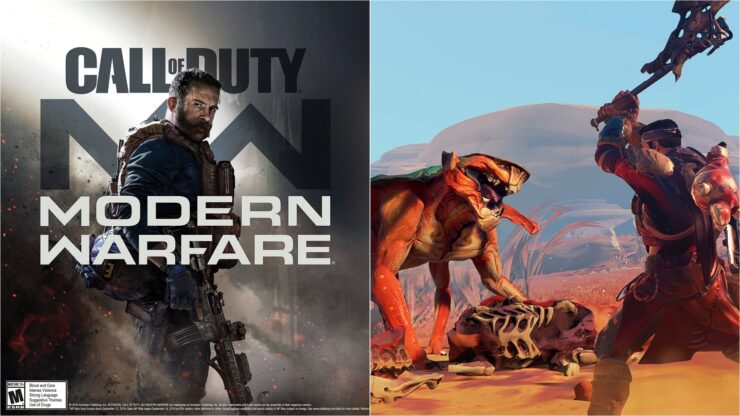 We've got a double giveaway treat for you today, for two games that are opening the beta gates in just a few hours.

The first giveaway is for Infinity Ward's Call of Duty: Modern Warfare beta, running from today at 10 Pacific Time to Monday, September 23rd at the same time. This weekend's test will feature both the large scale 32v32 Ground War mode and the first taste of cross-play action.

We've got sixteen beta codes that will let you pick the preferred platform on the official site. Then, the actual code will be sent to you via email. Codes are given on a first-come, first-served basis, so be quick!

The second giveaway (also first-come, first-served) is for Population Zero, the Sci-Fi MMORPG by Enplex Games we covered some time ago. This game is also entering Closed Beta testing today, though we're actually giving away thirty-one full game codes instead of just beta codes in this case. To redeem the code once you've received it, register an account on the official website and add the code in the appropriate field located in your personal profile page.

Just like Call of Duty's, this test will also be live until Monday, September 23rd. The developers shared the changelog with us, in case you were in the Alpha and are curious about what's new.

Regions
The Savannah has a new region - the desert. With this the layout of the western part of the map has been changed.
Changed the location of resources, water and mobs in the new region.
Added new points of interest - caves and jump puzzles.
Recalibrated the temperature value of different regions.
Added a new interactive obstacle - The light-fearing plant. Can only be destroyed by a torch.

Battle system
Added new animations of attacking with weapons.
Rebalanced the loss and restoration of stamina.
Fixed bugs regarding getting stuck during a fight.
Fixed bugs regarding attack animations.
Rebalanced weapon stats - Now they are separated into Mining and Battle weapons.
Added new attacks with a spear and an axe. Also a kick has been added when attacking without a weapon.
Upgraded the interaction between mobs and players during a fight.

Hub
The hub now has a public warehouse - you can leave up to six items with an NPC. While the NPC is alive, nobody can take those items except for the owner. If the NPC is dead, anyone can take any item from the warehouse.
Worked on the look and interior of the hub - added new models, SFX and VFX.
NPCs now have a yellow indicator above their heads.
A dialogue system has been added when interacting with an NPC. When talking to an NPC, sentences will appear in a special window. You can also choose out of several options how to answer.

Resources and Crafting
We’ve added back Practice Points (PrP) - You will receive them at the start of the game. They can also be acquired by locating artifacts scattered across the Savannah or by disassembling perks.
To save perks or buy slots for permanent perks you will spend PrP.
Added two new chests and recipes required to craft them.
Changed the loot lying in skeletons scattered in the Savannah.
The recipe for the Cocoon is now acquired by gaining the “Primitive Construction” technology, and not during the “Learning Mutations” quest line.
Changed the recipes for the mutagen and the genetic stabilizer.
The Hearth and Campfire can now be fueled with scraps of plants, sangwira stems, thistles and webweed.

Wounds
Intoxication reduces quicker with time but deals damage every second.
Overheating doesn’t affect your weight carry limit.
Overcooling doesn’t affect the rate at which you lose calories.
Reduced fall damage.
Premium account:
The game will have a premium account with the following benefits:
increased acquired PrP by 100%,
a 20% chance to get twice as many resources when gathering
the weight carry limit is increased by 20 kg.
the odds of an epic perk dropping are increased by 5%.
the odds of a rare perk dropping are increased by 10%.
At the moment premium accounts have been activated for everyone who purchased a founder pack before the start of the CBT

Other
Improved server performance.
There is no longer a “Default” button in the lobby when choosing a server.
Updated the background of the in-game map.
Fixed bugs regarding quests.
The campfire warms you up even without fuel or when deactivated.
Factions:
The game no longer has intermediate factions (half-xenobite, half-human)
The quest “Learning Mutations” is acquired when becoming a Void.
Mutation points accumulate slower
Mob attacks - by scyphopods and scyphoria - don’t add mutation points.
You will gain mutation points if you eat raw Life Essence.