Anyone who is using an Android device has probably heard about Dolphin Browser HD unless you're living under a rock. Developed by Mobotap, the browser is one of the most widely used browsers on Android devices with more than 8million users! Very recently the developer has update the browser to version 6 with some added features. 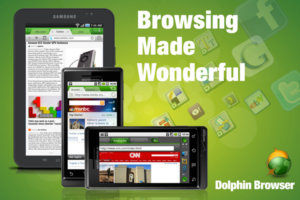 Apart from the usual bug fixes there are two notable changes. Firstly the logo of the browser has been changed, previously it had a logo similar to Firefox whereas the new one has a dolphin on it.

Dolphin brings out the beauty of the web and with Dolphin Webzine users can experience the web like never before. Web pages are cleanly displayed as a series of thumbnail images and users can scroll through web pages instantly using an intuitive touch interface, tapping on any thumbnail image to open the desired page.

Apart from the visual change, the browser has a new feature called "Webzine" that is basically a RSS reader that looks very visually appealing and works for many sites such as Twitter or Facebook. However there is a downside to the update, it has slowed down the app considerably and it seems to crash more often. Hopefully though a small update should fix that issue.