The Division To Feature Optional In-Game Purchases, According To PlayStation Store Listing

The upcoming third person shooter game The Division is one of the biggest titles Ubisoft will launch during the course of 2016. The European publisher is not new in adding microtransactions wherever possible and it seems like even The Division will feature optional in-game purchases.

According to the European PlayStation Store listing for the game, The Division is going to feature optional in-game purchases. It's not yet known what players will be able to purchase through them, but we will probably hear more about the matter as we get closer to the release date. 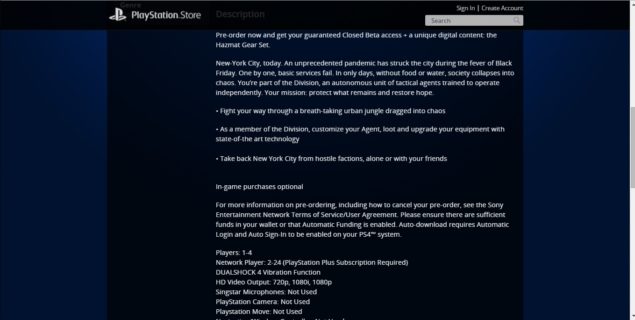 The Division is one of the more interesting third person shooter games launching this year. The game will come with some interesting features that will make the experience feel fresh like role playing game elements and more. You can learn more about the game by checking out a trailer released yesterday.

Tom Clancy’s The Division is a revolutionary next-gen experience that brings the RPG into a modern military setting for the first time. In the wake of a devastating pandemic that sweeps through New York City, basic services fail one by one, and without access to food or water the city descends into chaos. As an agent of The Division, you’ll specialize, modify, and level up your gear, weapons, and skills to take back New York on your own terms.

The Division will be released on PlayStation 4, Xbox One and PC on March 8th.