Disable Lowercase Keys In iOS 9 Keyboard – How To

Here's a complete walkthrough on how you can disable lowercase keys in iOS 9 keyboard running on iPhone, iPad, iPod touch.

As you keep on using iOS 9 more and more, you'll start to realize that Cupertino has indeed shipped out a massive update for iPhone, iPad and iPod touch users. There are little details and features hidden around every corner of the OS, and they're just waiting to be discovered. But while some changes are very obvious, such as the on-screen keyboard indicating lowercase and uppercase keys when you press shift, it's not something which everyone wants, and can be an eyesore if you're used to having an old-fashioned iOS keyboard.

Today, we'll show you how to disable those lowercase keys in iOS 9 and take things back how they used to be pre-iOS 9.

1. Tap on the Settings app icon on your home screen and launch it.

3. Look for an entry labelled 'Accessibility' and tap on that as well.

4. Scroll down a little and you'll see an entry labelled 'Keyboard.' Tap on it.

5. At the top you'll see a toggle switch called 'Show Lowercase Keys.' Simply move it to the OFF position. 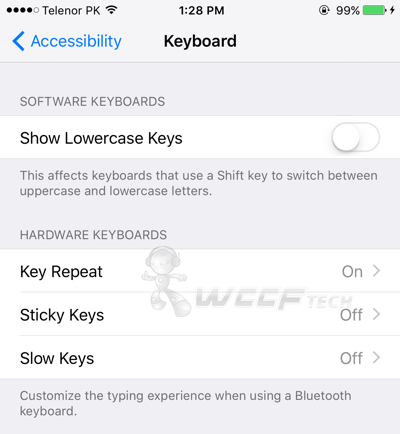 From here on in, you won't be annoyed with those lowercase keys on your iOS 9 keyboard anymore. And if you do change your mind regarding the alterations you've made, then simply follow the above steps once again and move the 'Show Lowercase Keys' toggle to the ON position. Things will be back to the way they were in a jiffy.

Lowercase keys in iOS 9 is actually a pretty nice addition and makes it easier to spot whether or not we are typing an uppercase or a lowercase letter. But for a lot of people, it can become an annoyance as the keys keep on changing their form causing a bit of confusion while typing. If you happen to fall into that category, then you now have a way of fixing things altogether.

There are more gems like these scattered all over iOS 9, and we'll highlight them all in the days to come, so sit tight, relax, and stay tuned to our coverage.

And if you happen to find this tip very useful, then don't forget to drop us a comment and let us know about it.