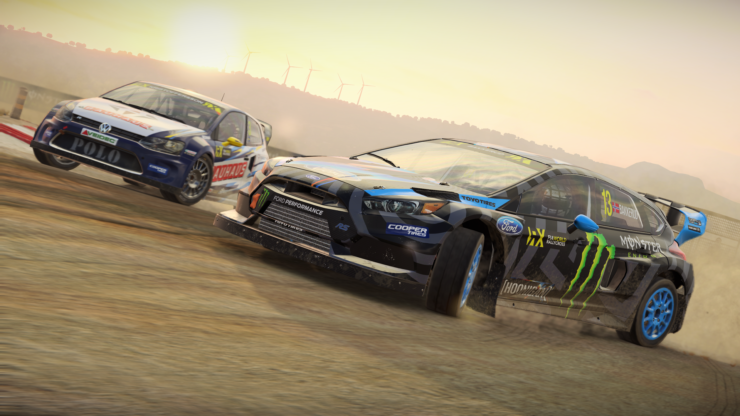 Like most driving simulation games, the DiRT series is typically known as a hardcore game. Fans will spend crazy amounts of money to create the perfect driving setup and spend weeks perfecting a single run on a track. It’s understandable why Codemasters, the developers of the DiRT series, would try to focus their efforts on their hardcore audience. However, DiRT 4 makes a change in the series, opening its doors to new players.

I had the great opportunity of interviewing Paul Coleman, Chief Games Designer at Codemasters. Paul gave us an insight into how the developers are trying to expand their target audience, what lessons have been learned from DiRT Rally and more.

Could you introduce yourself and tell us how you are involved with DiRT 4, please?

Hi, my name is Paul Coleman and I am the Chief Games Designer on DiRT 4. My role covers many areas of the design but I guess my main aim is to ensure that the game meets the gameplay expectations of the DiRT community.

I think the biggest challenge is making sure you appeal to as many people as possible without compromising the feeling for anyone. We started with the simulation engine that we developed during DiRT Rally and we knew that the improvements that we made were great. We validated them with Petter Solberg and Kris Meeke. These guys are some of the world’s best off-road racing drivers and their feedback was very positive and they really helped us dial in the feeling of the cars.

We also invited core members of our community to come to Codemasters and test the game and give us their feedback at various stages of the development, again they loved what they played so I really hope that translates into the wider community.

We then took the simulation model and tried it with some less experienced players. They were players that either had no experience with any DiRT games before and those that enjoyed previous DiRT Games but had perhaps given DiRT Rally a miss because it was too simulation focused. These players really struggled with the handling. We added more assists but they still struggled to control the cars and more importantly they felt that the cars were not exciting to drive and that they were being held back by the assists far too much.

Our solution was to create an alternative Handling Model that was more suited to players who don’t have knowledge of vehicle dynamics and simulation driving techniques. They make the cars easier to drive and allow players to make more errors yet still remain on the track. It feels great and everyone who has played it has really enjoyed the feeling of the cars.

What did the development team learn from DiRT Rally and how did this influence your choices when creating DiRT 4?

It definitely helped us get a much better feeling for the appetite for a rally game, especially when it was done with such focus. It gave us a clear understanding of what our core community wanted and the key foundation for them was the simulation model.

Everything we learned during the development of DiRT Rally has formed the foundation of our development of DiRT 4 but actually, it goes far beyond that. We were thinking about the ideas behind Your Stage since we finished working on DiRT 3 back in 2011.

I guess the biggest thing that we learned was that many players wanted to enjoy DiRT Rally but the difficulty was too high and there was far too big a barrier to entry. We’ve taking big steps to ensure that DiRT 4 is far more accessible and provides all players with an enjoyable experience, not just the guys who want a simulation experience.

A lot of fans really enjoy playing DiRT Rally in VR however, you’ve chosen not to launch DiRT 4 with VR support. Why have you decided against this, for now?

Developing for VR takes a lot of time and effort. We have had some tight deadlines to meet for DiRT 4. To ensure that we could deliver a great game, with all the great new features we are adding and at the quality level people expect from our studio we had to make some tough choices along the way. One of the things that were not feasible to support at launch was VR. Sadly it is the way these things are and I get that players who have enjoyed DiRT Rally in VR will feel like an important part of the experience is missing for them at launch.

I tested out Your Stage and I really liked having the option to race around a track that I generated. How difficult was it to create a system that allows players to generate their own tracks? Did you have to compromise on anything in order to make this possible?

It has been an incredible challenge and the whole studio needs to be congratulated on making the dream a reality. There were many challenges to overcome along the way and creating something so amazing would only have been possible with the backing of our Executives who supported us making the switch to this new technology.

In terms of compromise, there wasn’t actually that much. I think five locations is a decent offering when you have a nearly infinite number of possible stages from each location. Other than that we have lost a little bit of the very unique character that we could put into an entirely handcrafted stage but that small compromise has opened up the possibilities so much that I believe it really is a price worth paying.

Overall I think the biggest challenge was reaching our own quality expectations. Not only did we want to make procedural tracks happen but we wanted them to look and play as well as any stages we have ever made in any of our previous titles. The fact that we have achieved that really is the most amazing thing and everyone involved should be very proud of their incredible achievement.

With regards to Your Stage, is each track truly unique or after a while, will we begin to spot patterns in the track generation?

There are some elements that will become more familiar than others but we have tried to keep these to a minimum. The key thing to remember though is that these moments will happen in a different sequence with each new stage you generate. So compared to a bespoke track where every corner, every object, every building all occurred in the same place every single time you played it, with Your Stage that kind of repetition is a thing of the past.

DiRT 4 is all about adding more and making the game bigger and better than its predecessors but is there anything that won’t appear in DiRT 4 that featured in previous games? If so why did you choose to remove it from the game?

Yeah, it is a bigger game than we have ever made before and as a result, we have some elements that we haven’t included. Of course, we would love to include everything but that is simply not possible so we have to make some difficult choices.

Pikes Peak International Hillclimb is one such element. Sadly due to the license no longer being available we have had to remove it from DiRT. It is an amazing road with some ultra special cars but we cannot represent it anymore.

Maybe it will become available again in the future but for now, we have focused on other cool racing disciplines like Landrush, which makes a welcome return to DiRT. This style of Shortcourse Truck and Buggy racing is popular over in the South West of the USA and the tracks offer a very unique challenge which is quite different to the more traditionally European Rally and Rallycross disciplines so I think they are a worthy replacement for Pikes Peak.

Do you have any plans to release DLC?

Hah! As I designer I have lots of plans but not all of them get to see the light of day. Ultimately we need to look at the response to DiRT 4 and see what the community sentiment is towards the game. If the appetite is there then I think we have some great ideas that we can bring to the experience but I don’t want to say anything about them at the moment as it can only lead to disappointment if they don’t happen.

This is quite specific but I’ve seen a few people asking online: will DiRT 4 have ‘true’ triple monitor support?

We have tested DiRT 4 and ensured that it works with triple monitor setups but we have not done any specific functionality for it.

DiRT 4 launches on June 9th for PlayStation 4, Xbox One and PC. You may pre-order it on Amazon; for details on the PS4 Pro enhancements, check our previous report.

DiRT 5 Q&A – Dishing the DiRT with the Codemasters Folks

DiRT 5 Preview – The Next Generation of Racing is Coming