Batman Arkham Knight has been on the receiving end of a lot of criticism recently. Mainly due of the fact that the games PC version was such a poorly optimized port and now reports have also confirmed that the PS4 version is suffering through leaderboards issues aswell.

Previously, we reported that the Xbox One version of Batman Arkham Knight might be running at 900p on the Xbox One console and Digital Foundry has just confirmed it as well. 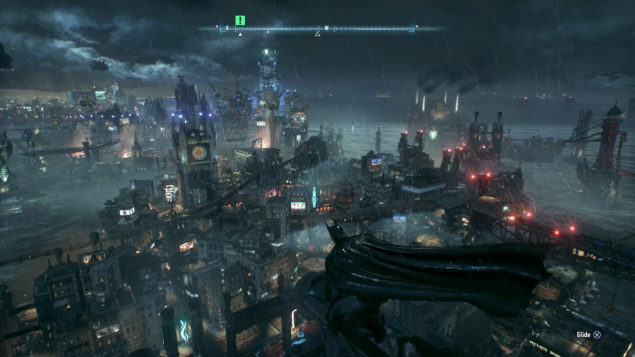 Insisting that both the console version were very much similar in graphics, Digital Foundry admitted that the Xbox version of Batman Arkham Knight ran at 900p whilst the PS4 version runs at a native 1080p. Here's what they had to say about the PS4 version.

"The visual return is easy to see; on PS4 the game runs at a full native 1920*1080 resolution many hoped would be the standard this generation. It's perhaps not the crispest example of a full-HD game, owing to its heavy post-process anti-aliasing, and a film grain filter - but the visibility of Gotham's city-line is all the clearer for running at this pixel count. Pop-in is something that flares up from time-to-time, but overall the game looks gorgeous in motion and rarely shows its rough edges."

Admitting that the Xbox One version was 900p, they said:

"On Xbox One, every single effect and detail carries directly across from the Sony release. Texture mapping is identical, and in terms of asset streaming there are only minor variances between the two versions when it comes to texture pop-in. However, it's a familiar scenario in the resolution stakes, and we get an upscaled 1600x900 on Xbox One that causes more pixel-crawl on distant buildings than we see on PS4. This is accentuated by Arkham Knight's post effects - the same gamut of filters as seen on PS4 - where a chromatic aberration pass heightens the effect of pixel crawl in brightly-lit areas."

"The PC's dire situation may cast a shadow over its launch, but the fact remains that Batman Arkham Knight is an exceptional release on console. It also says a lot about Rocksteady's assessments of PS4 and Xbox One when designing the game, having laid out the game's blueprint well before truly knowing either console's specs. In the end, it's a superb release whether you go with Microsoft or Sony's hardware - though the preference is with the clarity of PS4's 1080p output. Weighing in its slightly smoother performance overall on gliding through Gotham's streets, and it's fair to say this is the technical champ of the two."

Yes, we definitely agree that it is one amazing title to buy and the PC gamers will be able to enjoy it in due time. With that being said, stay tuned for more information on Batman Arkham Knight and do share your views with us in the comments section.