The release of Batman Arkham Knight on PC has not been good for Rocksteady to say the least. The PC version had several issues and was a bug infested mess. With so much criticism coming their way, Rocksteady did not have much of a choice other than to suspend/delay the release of the game with a public apology.

We want to apologize to those of you who are experiencing performance issues with Batman: Arkham Knight on PC. We take these issues very seriously and have therefore decided to suspend future game sales of the PC version while we work to address these issues to satisfy our quality standards. We greatly value our customers and know that while there are a significant amount of players who are enjoying the game on PC, we want to do whatever we can to make the experience better for PC players overall……

The developers are doing all they can to fix issues that the game has on PCs but It is important that they don't ignore the console versions of the game altogether. News coming in is that the PS4 version of Batman Arkham Knight has an issue with the leaderboards and they're not working on the PS4.

Over the past few days, PS4 users have submitted their queries about the game's leaderboards not showing and merely restarting the game or deleting saves and caches does not mitigate the issue. The error page displays the following message: 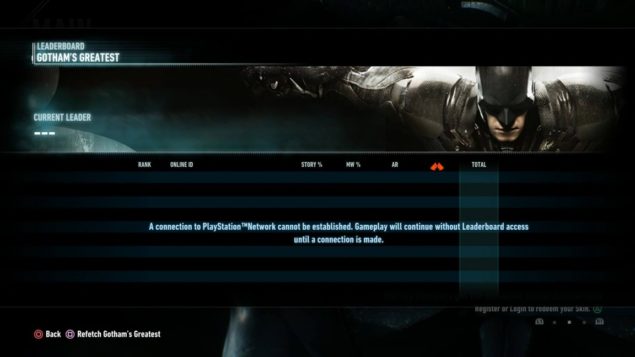 The issue continues in-game too when the leaderboards don't show up when you complete a game mission which is a part of the game where the game keeps track of your scores so you can compare them with your friends and gamers online to celebrate your success.

Some online believe that this issue might be a result of the games overloaded servers (the same happened to Mortal Kombat X which is another Warner Bros. title). This network issue is only affecting the PS4 version of the game (as far as the reports suggest) and does not intervene with the general playability of the game.

This issue with the PS4 version of Batman Arkham Knight might not be show-stopping but it is still something that the developers should look into as soon as possible.

Stay tuned for more on Batman Arkham Knight and do share your views with us in the comments section.