Ever since the initial reveal for Battlefield 3 which showed a soldier holding a toy dinosaur in his hands, fans around the world wanted Dinosaurs to be part of the DLC deal, sadly even after all that premium had to offer the once dominant lizards were never given to us, but a recent post on DICE's LinkedIn Page shows some hope and that maybe the survey conducted a few months ago might just have a good amount of new enemies / ally for us to play as in Battlefield 4 or as accompanying DLC. Who here wouldn't love to see Dinosaurs in Battlefield 4? 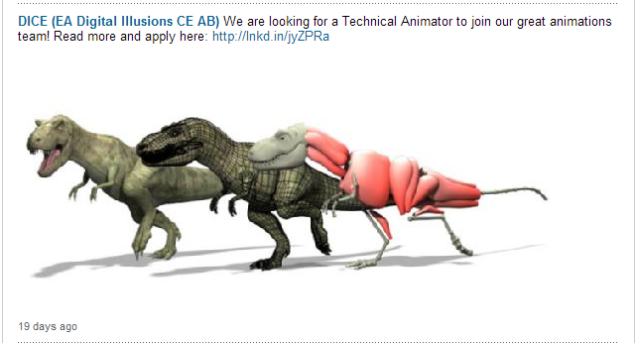 Dinosaurs in Battlefield 4, either in the main game or as DLC, but hopefully they are going to be a part of it.

Every Battlefield prayer had high hopes of a dinosaur based DLC for Battlefield 3 to help spice up the action, sadly it didn't happen despite a T-Rex action figure being spotted on Wake Island, and fans thought that was DICE teasing them of an upcoming DLC but sadly, it wasn't.

This could be nothing or at all or perhaps it could be something, but on DICE's LinkedIn page, they are looking a Technical Animator and they used a rather curious picture instead of many others which they could have, they used the above picture to show what the work would curtail.

While the image can just as easily be debunked, its also worth mentioning that a few months ago an even more interesting survey was conducted that had an interesting question on it

All of the below is courtesy of NeoGaf:

The third DLC description was the most interesting: DINOSAURS! From what I recall, it was described as a coop mode where you and other players would fight against dinosaurs with primitive weapons, specifically mentioning a bow and arrow. Possible names were: BF4: BC, BF4: Primal Combat (or maybe it was Primal Warfare?), BF4: 21942 BC and some other one that was something like BF4: Dino... something. Can't recall.

And the thread was later updated to verify that the survey taken was indeed genuine! so maybe dinosaurs could be part of Battlefield 4?