Capcom is at it again, this time with Devil May Cry 5.  Unlike Resident Evil 2 this one isn't a remake but a full fledged follow up to a very popular series.  In this one we'll be looking Devil May Cry 5 PC performance and thanks to the fact that it's running the excellent Reach for the Moon Engine (RE Engine), that Capcom has been capitalizing well off of since the launch of Resident Evil 7, we have a pretty good indicator of what to expect with the results in this one.

Testing this game was more than a little bit challenging.  Not because it lacks a benchmark utility, that's something that is easy to work around with a little bit of planning, but rather the swing in performance through scenes.  Reminiscent of Metro Exodus where framerates can go from over 100 to below 60 by simply looking the wrong way.  The game also performs very differently based on which area of the game you're in.  But the biggest monkey wrench in the whole thing comes in two forms; multiple variable settings and whether the game decides it wants to launch in DX11 or DX12.  For our testing we took our results from the main intro cutscene which uses the game engine and we allow it to run the course from the moment the Capcom logo disappears to the time that the van crashes or roughly 222 seconds.  Settings wise we used the highest settings available UNLESS they were variable, the settings that are set to OFF were those which only allowed for variable settings and due to the very nature of variability, we left them disabled to maintain consistency.  The API debate is an interesting one here as the game game supports DX12 but features a fallback to DX11, more often than not it launched in DX11 for us so we set that to the target API.  There is not an option in the game to do this so you'll have to rely on the .ini file.  But another thing to take note is that even in the scene we used the frame rate varied wildly and resulted in a pretty wide disparity between averages and 1% minimums so evidences of stutter will need to be seen in the spread from 1% and .1% minimums. And much like the results Metro Exodus the performance metrics here can be used to have an expectation of performance with it often higher and lower but is a good indicator of performance variation between CPU cores, API, and graphics cards.

There was an interesting run on the initial launch of Devil May Cry 5 where Capcom slipped up and let out the .exe for the game that allowed it to run without Denuvo kicking in.  Some users reported up to 20 FPS improvements so we had to take a look into it ourselves.  The video below shows side by sides of the game running with and without Denuvo and also shows the segment we used to capture our performance results from. Long and short of our testing as well as a few others we've reached out to we were hard pressed to find a difference in performance in this game but there is a clear indicator that the CPU load and memory load were different.

Testing the performance the game has with different core and thread configurations is a good tool to help identify points of diminishing returns.  This doesn't necessarily show the load across cores and threads but you can see that once you hit 4 cores and 8 threads or 6 cores w/o Hyper Threading you gain very little.  While Devil May Cry 5 makes use of the 4 core CPU with HT to stretch out you can clearly see that 6 cores is where it hits its stride and kinda stays there, but prefers no HT for optimal performance. 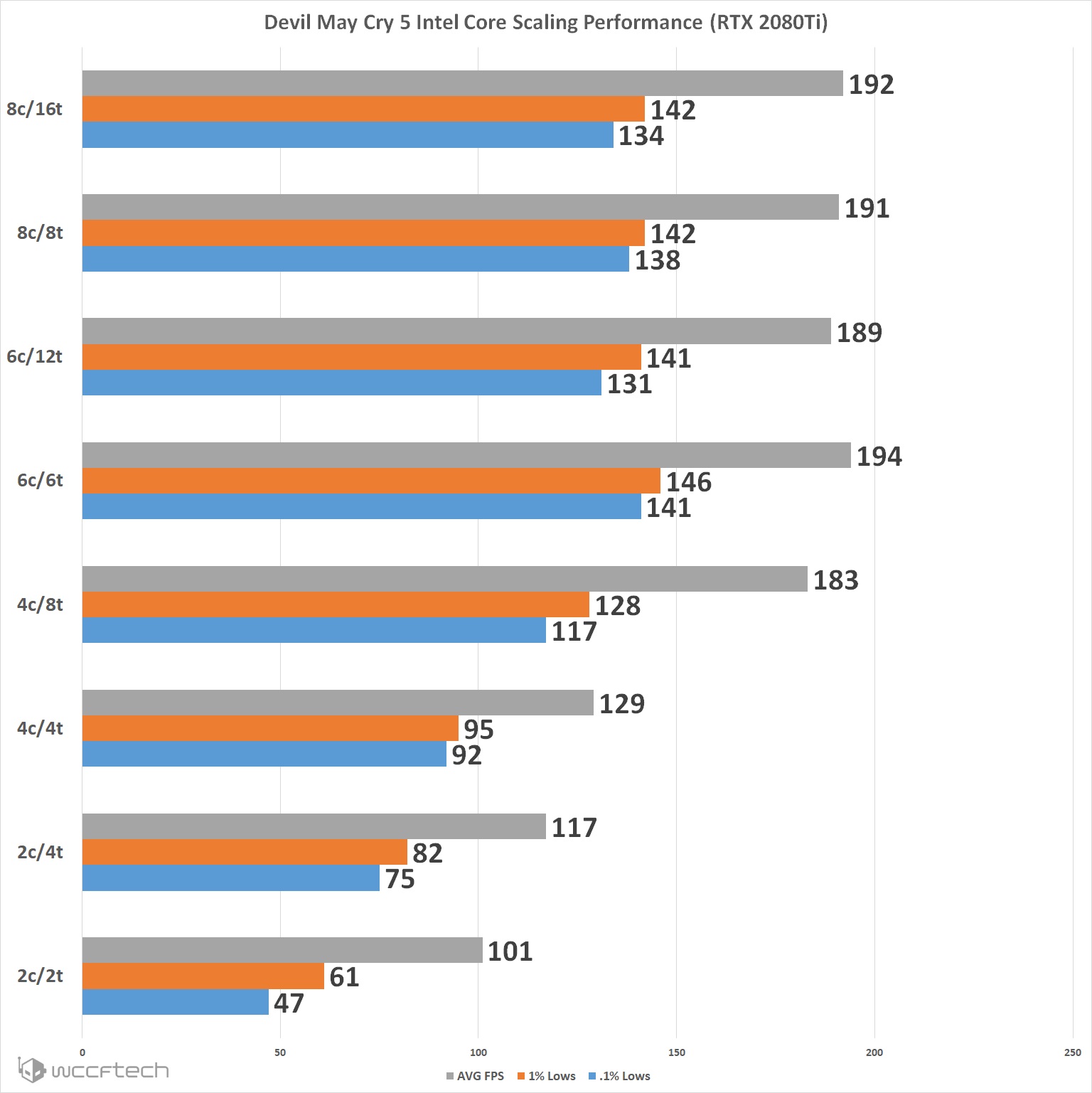 Devil May Cry 5 shows good scaling at 1080p and is even able to deliver a great experience all the way down the stack.  You can see at the upper end of the GPU stack you can see where performance start to become CPU constrained. 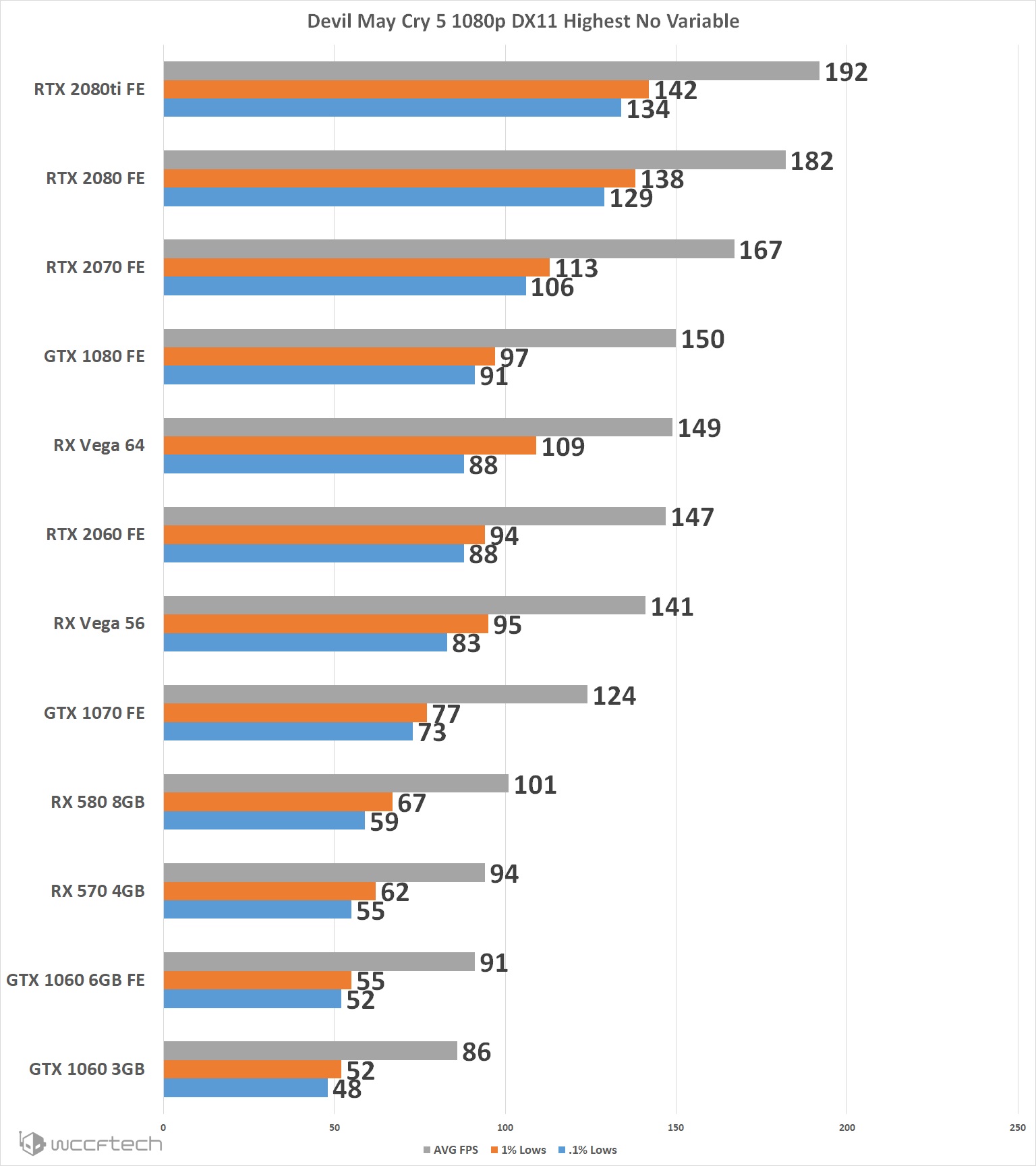 2560x1440 starts to separate the men from the boys as they say but even the lower end still manages to maintain a 60FPS average, but expect some harsh dips along the way. If you're playing this one on a 144Hz VRR panel can expect a very smooth experience provided the VRR window is good and wide. 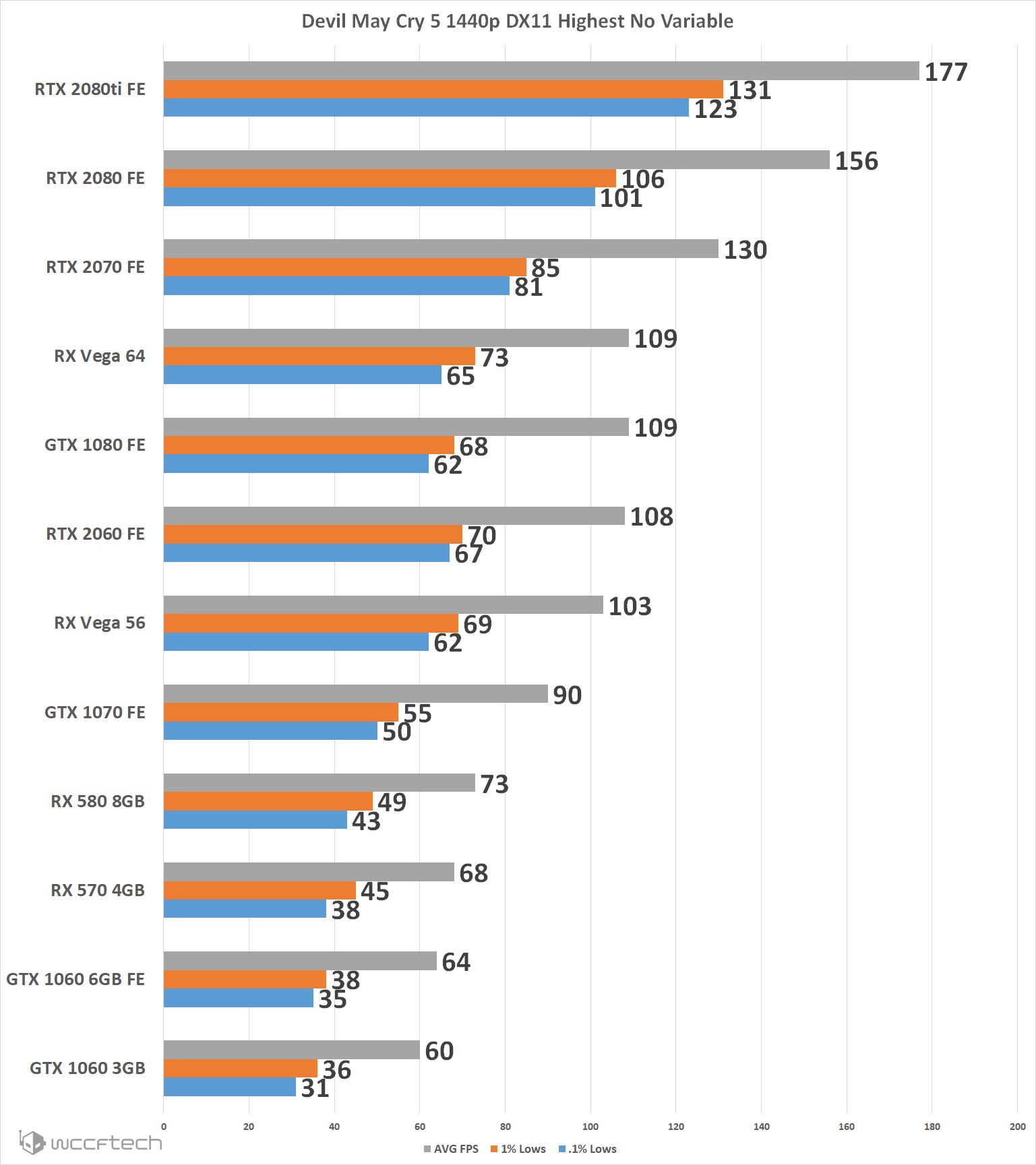 This one surprised me a bit, seeing how many cards came right up and danced around the 4K 60FPS mark.  Often I would say that adventure games are perfectly playable when running at least 30+ FPS this isn't one of those kinds of games, more frames really make this action packed ride even better. 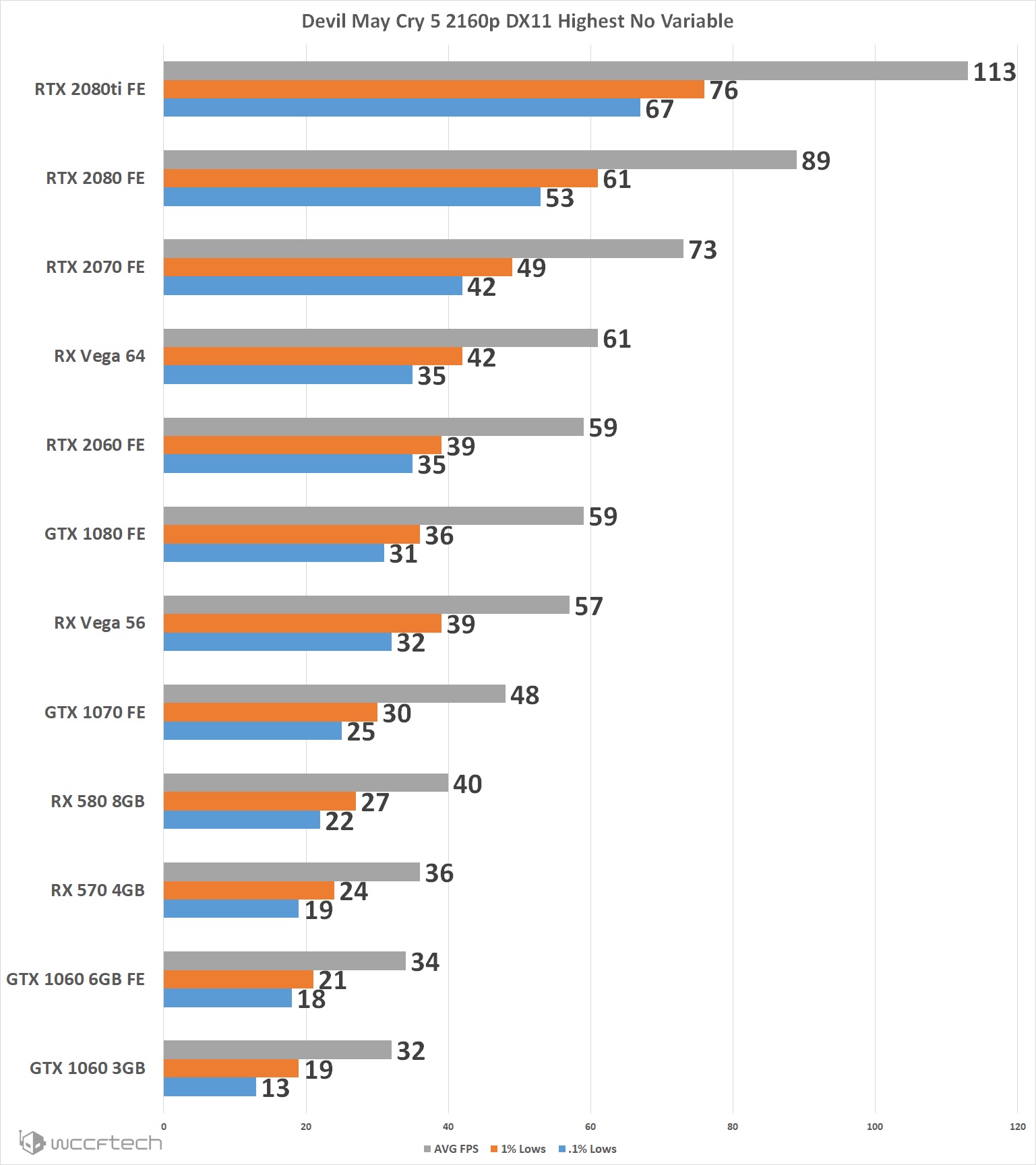 Seeing as how Devil May Cry 5 is DX 12 Compatible meant we at least had to take a quick look at it.  After looking at this I can't help but question the logic behind not allowing users to select which API they want to use and relying on some unknown to pick which one it launches with at launch.  While we have tested above with DX11 after running this I would recommend that Radeon owners extract a little extra performance by forcing DX12. 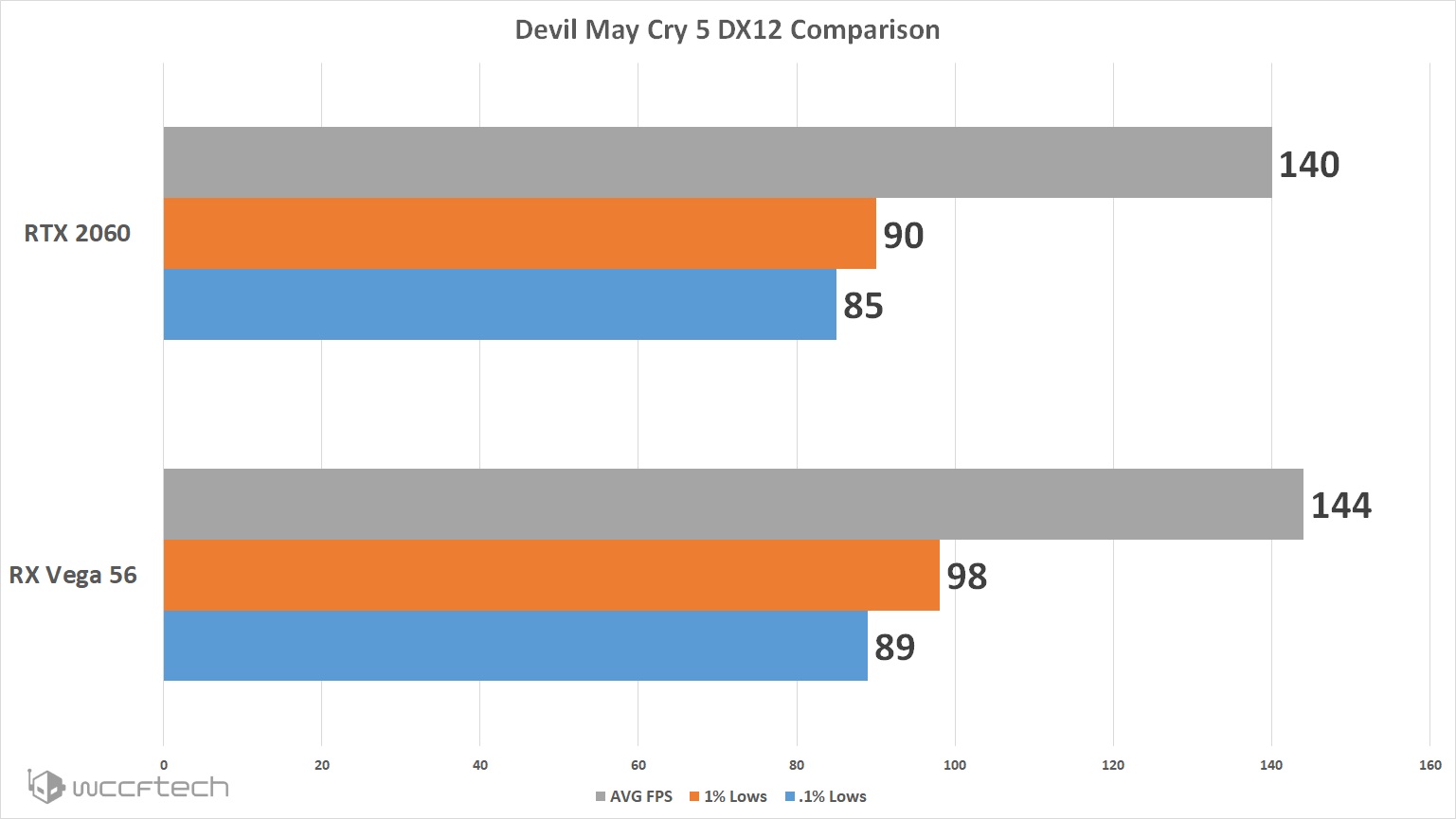 The wrap up here is much like it was with Resident Evil 2 and that makes me very happy.  There's not much better than when a new PC game launch goes well with the game and the performance.  I don't feel like there's much in the way of recommendations and suggestions as pretty much everyone should be able to get into this one.  My only real regret with this one is that Devuno is present and kept me from being able to go back retest everything with DX12 as well due to hardware change lockouts and having the time to break out the Ryzen 5 2400G and seeing how the Vega 11 handles this one.