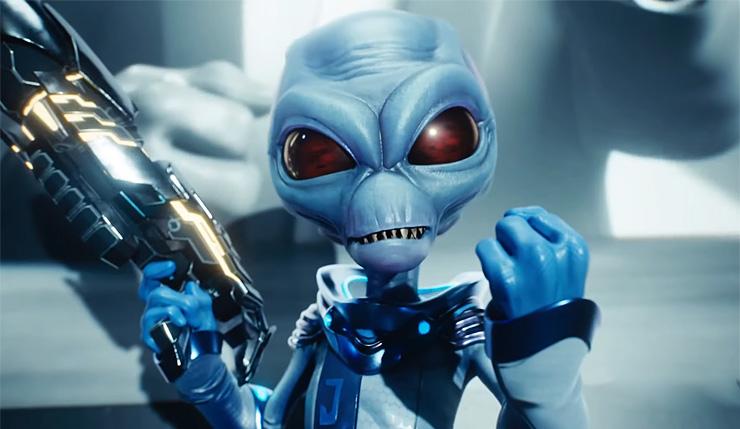 Last year it was announced that edgy mid-2000s staple Destroy All Humans! would be making a surprise comeback, but we haven’t heard much about the remake since then. Well, that changes today, as we have a new mayhem-packed Destroy All Humans! trailer and a release date. Check out the trailer, below.

Missed out on Destroy All Humans! the first time around? Here’s what you need to know:

One giant step on mankind!

Destroy All Humans! is a cult classic and one of the few games that will have you laughing out loud. Many games have taken inspiration from its mix of humoristic story-telling and easily accessible open world shooter action, as well as its wide range of over-the-top weaponry. But there can only be one Cryptosporidium: the human-hating alien with the voice of an angry Jack Nicholson and a shorter fuse than a xenomorph on steroids.

Step right up and enjoy the show!

Only Destroy All Humans! allows you to explore idyllic US cities of the 1950s, read the thoughts of their citizens to uncover their secret desires… and then burn the very same cities to the ground with the mighty Death Ray of your flying saucer!

Pre-orders for Destroy All Humans! are now open, and there will of course be the usual array of special editions. The DNA Collector’s Edition will set you back $150 and includes a Crypto 'N' Cow figurine, keychain, six lithographs, anti-stress toy, and all in-game Crypto skins.

Meanwhile, the Crypto-137 Edition costs a whopping $400 (yes, really) and includes a Crypto-137 figurine, as well as all the stuff from the DNA Edition.

Destroy All Humans! invades PC, Xbox One, and PS4 on July 28.