A few days ago, the 500 Million Dollar Budget of Destiny caused understandable hype. After the compulsory potshots, it was more or less agreed that Destiny is the Most Expensive video game ever made. But what if I told you that if Destiny was a movie, it would also be the most expensive film in creation, uncontested. We take a look by comparing its budget not only to other famous IPs but to Hollywood's Blockbuster movies as well.

Well we believe actions speak louder than words, so we have prepared a bar chart to illustrate just how expensive Destiny's budget really is. And consider this: at the earnings call Activation's plan for destiny was revealed and turns out they see Destiny as a "Billion Dollar Franchise". If that ever happens, it will also go down in history as not only the first Half a Million Dollar IP but as the first Billion Dollar IP as well. Needless to say, we are terribly excited for this game. A short note before we dive in. We only used games and movies we could actually verify, so if you don't see a favorite game in here its probably because we couldn't find an authentic source (or forgot). 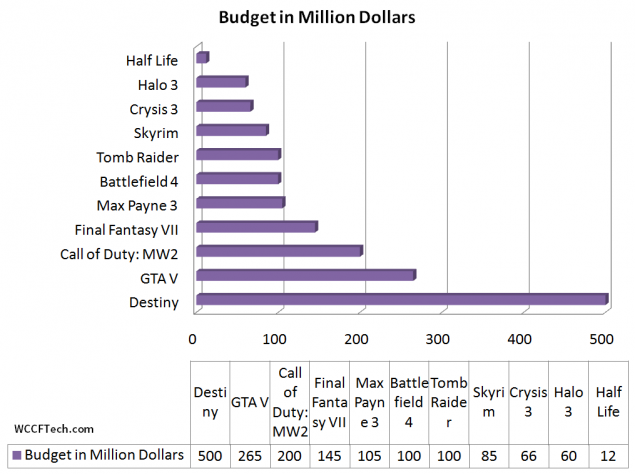 As you can probably tell by looking at the chart, Destiny's budget is a very big jump from the usual positive trend of high budget AAA IPs. The previous game to hold the honor of the world's most expensive video game was Grand Theft Auto V and even that clocks in at about 265 Million Dollars; about half of what Destiny is worth. Even more interestingly, thats only about a quarter of its expected potential. Here is a fun fact. Each Half Life episode costs about 12 Million Dollars. Using the same team and engine, you can get around 41 Half Life Episodes for Destiny's Budget. Similarly, You can get 5 Battlefield Titles with the same payroll and development intensity. I personally found Crysis 3's budget very surprising. Cryisis 3 is arguably the best looking game out there. The graphics and polygon levels are simply off the charts, and yet it cost only 66 Million dollars in total. Ofcourse you have to consider the linear and short game play of an FPS vs an open world like GTA V, but even then, it makes you wonder. Surprisingly the actual development cost of Destiny was only 140 Million Dollars, the rest was all spent in Marketing. Now lets take a look at how Destiny fares against, Hollywood's, biggest and baddest AAAs. 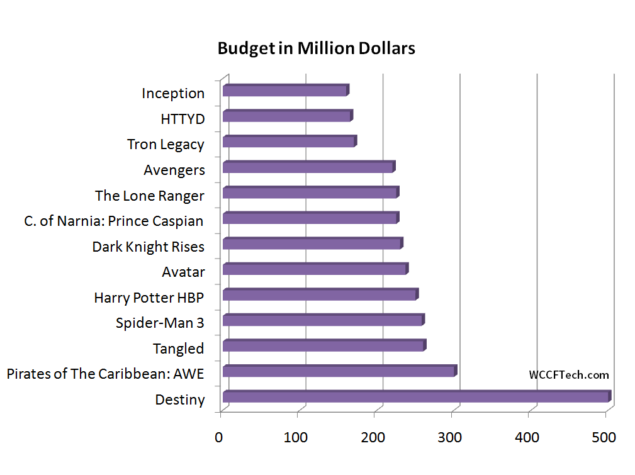 Once again, Destiny breezes past all the highest budget films of Hollywood with relative ease. No movie even comes close. The closest movie is the Pirates of the Caribbean: At World's End, clocking in at a mere 300 Million Dollar. Not exactly half, but still a long way to go from Destiny's budget. And yes, that does include the marketing budget of the movies. If nothing else, these numbers do tell us one thing: the Game Industry now has more Inertia than the Video Industry. And I am not sure whether that is a good or a bad thing. Because unlike a movie, which has a very high probability of making a profit many times over initial cost, games are much more risky. And at that abrupt note; thats all folks.

@DestinyTheGame is actually more expensive than any Hollywood movie in creation, not just games. http://t.co/PcHdOP9h9W