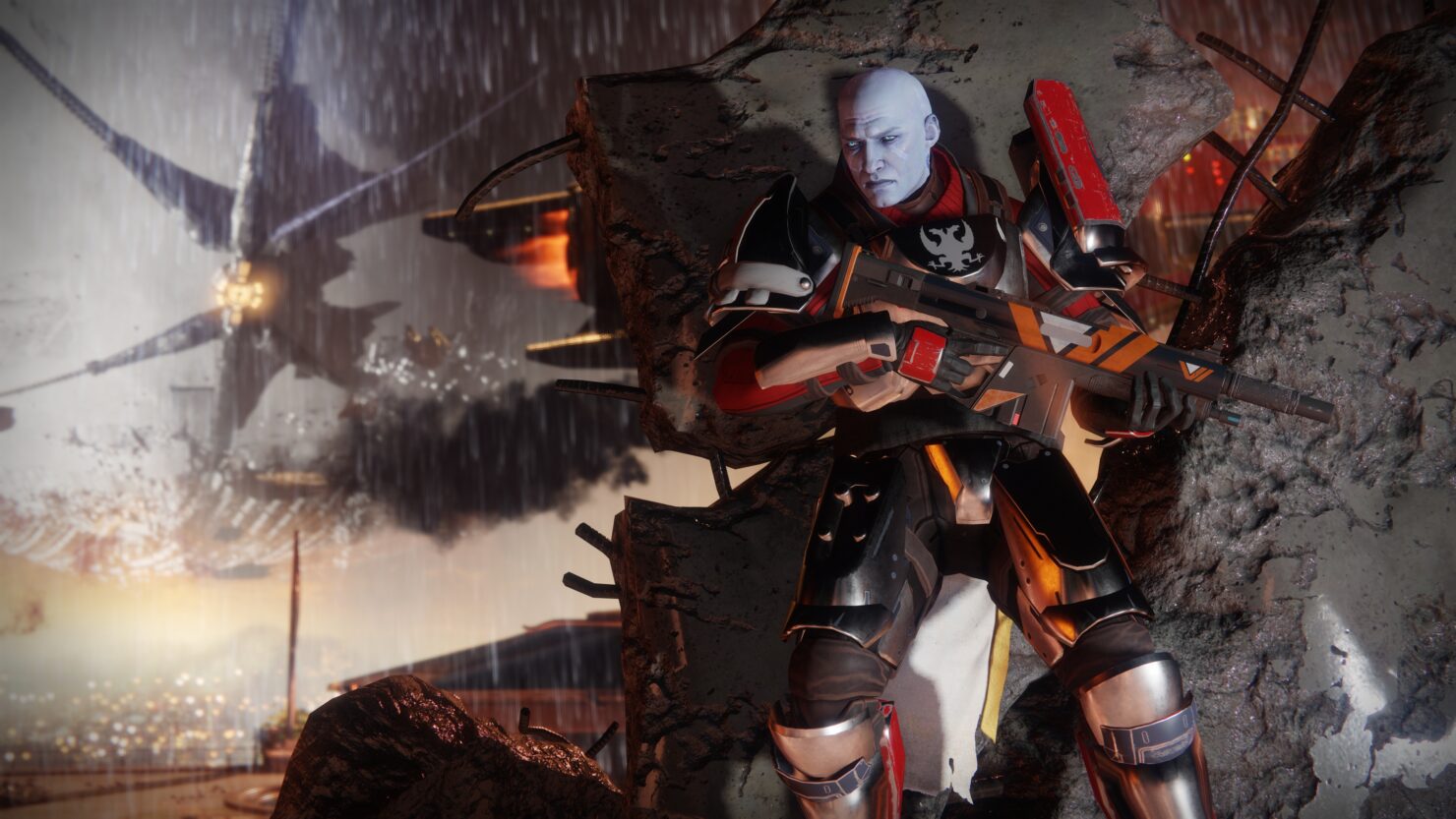 We know that Destiny 2, the greatly anticipated sci-fantasy first-person shooter by Bungie, will run at uncapped frame rate on PC. The game was already playable at 4K@60FPS during the reveal event and all the reports suggest that it's a major improvement over the 30FPS available on consoles.

During an IGN video interview, Bungie's developers explained that the game couldn't run at 4K@60FPS due to CPU constraints.

While it is true that the Jaguar-based CPU is undoubtedly the weakest point in the hardware of PS4 Pro (and Scorpio), we've compiled a list of reasons why we believe Destiny 2 could and should indeed run at 60FPS on the enhanced consoles produced by Sony and Microsoft.

4K@60FPS would be a lofty goal to reach with console hardware, that's for sure. However, 1080P@60FPS wouldn't - we have plenty of games running at that frame rate on PS4 Pro and that includes even very complex titles.

Sadly, Sony and Microsoft are pushing the dream of 4K gaming on consoles that aren't quite ready to make that leap yet, at least not on all games.

4K@30FPS is fine for a single player RPG or action/adventure game, but shooters are a different story entirely - particularly competitive ones that have even the slightest aspiration of becoming an eSport.

We've only just managed to get single graphics cards capable of handling 4K@60+FPS on PC, and those GPUs are far more powerful than both PS4 Pro and Scorpio. It's understandable that performance intensive just cannot run at 4K@60 even on PS4 Pro and Scorpio, which is why the resolution should be lowered instead. After all, frame rate is more important than graphics since it actually affects gameplay, which should always be the first and foremost priority in games development.

The most important game developers have understood the importance of frame rate. There isn't a single AAA shooter locked at 30FPS these days on consoles - except Destiny 2 and its predecessor, of course.

Call of Duty developers have been doing it for a long time and it's no wonder they've had the most played first-person shooter by far. Now, all the others are following in those footsteps except Bungie.

It should be noted that these games managed to get 60FPS on the original PlayStation 4 and Xbox One consoles, which have weaker CPUs than the PS4 Pro and Scorpio.

We're not saying it should absolutely run at locked 60FPS on PlayStation 4 and Xbox One, but at least on the Pro and Scorpio - even at the cost of resolution.

One explanation that's been thrown around by some fans after Bungie announced that consoles would be locked at 30FPS is that Sony and/or Microsoft have mandated frame rate parity in multiplayer games with the original PlayStation 4 and Xbox One. This is completely false, though.

Mike Ybarra, Corporate Vice President of Xbox at Microsoft, clarified yesterday that no such requirements exist on Xbox and it's ultimately up to developers to choose what's best for their games.

We don't need any statement from Sony since there are already plenty of examples on PlayStation 4 Pro. Battleborn players, for instance, can choose between 4K@30 and 1080P@60FPS on PS4 Pro to run the game far smoother than on PS4. Dark Souls III, which features a PvP mode, is locked at 30FPS on PS4 while the PS4 Pro version can reach 55FPS.

These are some of the most significant examples, but we have many others. Assetto Corsa, Battlefield 1, F1 2016, Final Fantasy XIV, Mount & Blade: Warband, No Man's Sky, Planetside 2, Plants vs. Zombies: Garden Warfare 2, Rainbow Six: Siege, and Steep all run at far higher average frame rate when played on PS4 Pro.

"Still, A Level Playing Field Should Be Enforced by Developers"

No, it doesn't. Developers shouldn't cater to the lowest common denominator and render the purchase of more powerful hardware useless. PC gamers are used to having different frame rate, but is the console scene really that different? There are many other factors that already cause disparity.

Take for instance Internet connection and ping in particular - some have high bandwidth and low ping, others are stuck with the opposite. Or audio, which can be critical in a shooter game: many play with their built-in TV speakers, while others spend money to use cutting edge 3D headphones or even a 5.1/7.1 surround system.

Last but not least, some gamers play on TVs with heavy input lag which can potentially add even more delay than a bad connection, while others are using blazing fast monitors. True competitive parity can only be guaranteed in LAN tournaments, certainly not when playing online multiplayer with every gamer sporting a different setup based on budget and preferences.

At this point, we'll have to go back to the original statement by Bungie.

Our game's this rich physics simulation where collision of players, networking, etc, and like, it wouldn't run. Destiny's simulation, like we have more AI, more monsters in an environment with physically simulated vehicles and characters and projectiles, and it's part of the Destiny magic, like that, like 30 seconds of fun, like coming around a corner and throwing a grenade, popping a guy in the head, and then you add like 5, 6, 7 other players in a public event; that is incredibly intensive for hardware.

Honestly, this is hard to accept. On the graphics front, Destiny 2 looks so close to the first game that many have voiced their disappointment by saying that they could have been easily fooled into believing this was an expansion. A bigger leap was surely expected, considering that this sequel didn't have to be engineered for PlayStation 3 and Xbox 360 like Destiny was.

And the physics have never been Destiny's strength, so Bungie's comment isn't really satisfying. We have actual games where dozens (Battlefield) or even hundreds of characters (Planetside 2) collide with many vehicles at once on screen, the former even featuring extensive environmental destructibility. Destiny's meager "5, 6 or 7 other players" combined with a limited use of vehicles (another aspect that many fans hoped would be increased in Destiny 2) and no destructibility pale by comparison.

They Could Just Implement It for Crucible PvP Only

Even if we want to concede that Destiny 2's PvE may have a decent amount of things going on at once, we have to remind ourselves that the actual concern is for the Crucible PvP mode. In fact, it would be perfectly fine if the game had locked frame rate at 30FPS in PvE and unlocked, up-to-60FPS in PvP; this is growing to be common in several games, from Gears of War 4 to Uncharted 4 and others.

That it doesn't is even more troubling after taking into account that player count in the Crucible has been shrunk down in size to 4v4 from 6v6, with small maps and no active AI enemies at all.

It's Likely Due To The Engine Used

The most likely reason for Bungie's decision to stick with 30FPS on consoles, even enhanced ones, is due to their engine. DICE's Frostbite is one of the most advanced engines, with the Swedish developer constantly pushing it forward, while Planetside 2's Forgelight was crafted with the specific purpose to allow battles of unprecedented scale.

Meanwhile, Destiny 2's engine seems to be a mere evolution of the first one - and not a huge one, since Bungie didn't really highlight technological advancements a lot during the gameplay premiere. They did say the new European Dead Zone was twice as big as any zone they have created for the first game, but that hardly seems like a huge increase considering that Destiny's zones were incredibly small and ranked high in the chart of biggest disappointments among fans.

Destiny ran at 30FPS on all platforms. In all likelihood, the engine should have been restructured to allow for constant 60FPS; not an easy feat, or one that didn't come with development costs. But we're talking about one of the biggest games in the industry here, not an indie title made by two passionate programmers in their basement. It's just not an investment Bungie and Activision decided to make, just like that for dedicated servers; in both cases, not a great choice.

I'm still very much looking forward to playing the game on PC, particularly for its PvE. However, at least on this front the widespread criticism you'll easily find for Destiny 2 on forums and social media feels wholly justified.