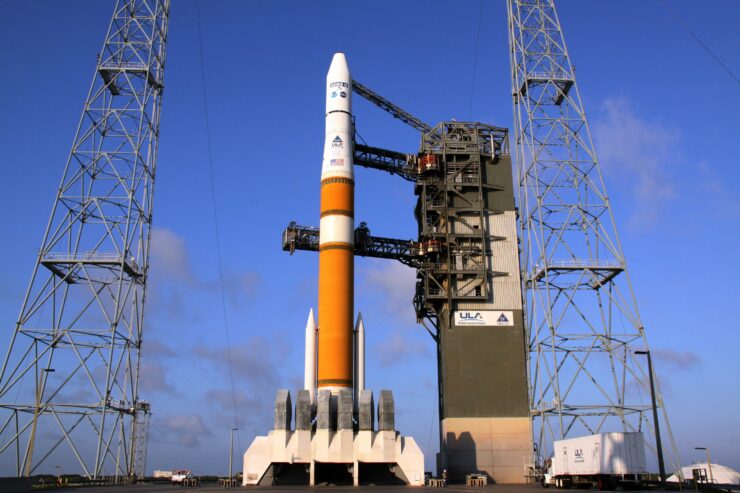 Today, the United Launch Alliance will be launching the big brother of its Atlas V rocket, a Delta IV rocket. This vehicle is supposed to carry a communication satellite into a super high orbit for the US Air Force. This satellite was built by Boeing and is the 8th of the military’s Wideband Global SATCOM constellation, which are basically a series of probes that work together to provide extremely high-bandwidth communication. To have this capability the WS-8 satellite will orbit the Earth 22,000 miles above the Earth’s equator.

Getting so high in the orbit requires a lot of power and unfortunately the Delta IV rocket isn’t the most powerful one that ULA has. The most powerful among the other Delta IV rockets, is the Delta IV Heavy. This particular vehicle has 3 core boosters that help lift heavy payloads into space. The one that will be launching today is a special configuration of the Delta IV. It has four small motors that are attached to the rocket’s base and will provide it the extra thrust that it needs to get so high in the orbit. This is the sixth time this version of rocket will fly and we may not see more launches of this vehicle in the future. This is because the ULA intends to phase out all versions of the Delta IV by 2018, except the Delta Heavy.

Now the takeoff is scheduled to take place this afternoon at 6:53 PM ET from Cape Canaveral, Florida. ULA has a 49 minute launch window so the vehicles will most definitely liftoff anytime till 7:42 PM ET. There is an 80 percent chance of good weather conditions and the company hopes to launch the vehicle today. If for some reason the launch doesn’t happen today, the company will have the option of doing it tomorrow but the weather forecast for tomorrow isn’t as good as today’s.

Launches and some more launches

Today’s launch could be the first of launches that will be taking place in the US over the next one and a half week. Another launch that will be taking place in the coming week is Orbital ATK’s Pegasus XL rockets. These are launched from the belly of an airplane and it will take off from the Cape on December 12th. This rocket will be delivering NASA’s hurricane monitoring satellite into the orbit. ULA has also scheduled to launch a commercial communication satellite from Florida on the 16th of December and this one will be using an Atlas V vehicle. The very same day SpaceX also has huge plans and will be launching a series of satellites for Iridium from Vandenberg Air Force Base in Caliornia.

If SpaceX succeeds in this, it will be the first time it is launching the Falcon 9 rocket after the explosion in September. There hasn’t been an exact confirmation whether SpaceX will launch Falcon 9 again before the year ends or not but the company has high hopes. So December is going to be filled with launches and new surprises and discoveries so let’s buckle up our seat belts because it is going to be a very eventful year end.