Dell Mobile Connect app allows connecting an Android phone to a Dell computer to receive and respond to calls, text messages and notifications directly from Windows. Dell has now announced that they will be updating Dell Mobile Connect later this year to add support for iOS screen mirroring and data transfer.

Dell had launched Mobile Connect back in 2018 with support for Android smartphones and limited capability with iOS devices. Android users could interact with their apps and transfer files right from the start, while iOS devices were limited to just text messaging, phone calls, notifications and contact listing. This future update will allow users to interact with iPhone apps right from their Windows desktop, using a mouse and keyboard. File transfer functionality will be allow dragging and dropping photos and videos for instant sharing, however, users will have to rely on other platforms to share other file formats. 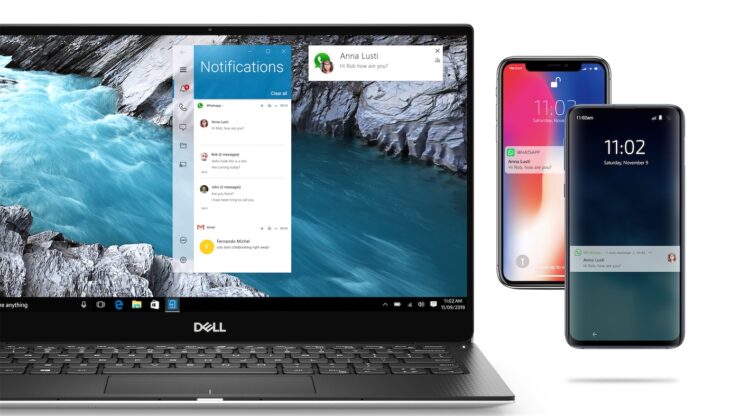 Users with Dell XPS, Inspiron, Vostro, Alienware and G Series PCs purchased in January 2018 or later, with Bluetooth, will be able to download the Mobile Connect app and connect their iPhone through a simple setup process. A companion Dell Mobile Connect app will need to be installed on the iPhone as well.

While the setup process and functionality do not match the simplicity of handover, continuity, universal clipboard, messages, and FaceTime call features that Apple offers with macOS and iOS, Dell Mobile Connect's functionality is actually better than Apple's in some ways. Apple does not show notifications from iOS devices on Mac, neither do they offer a screen-mirroring feature to allow interacting with iOS apps. It is surprising that a third-party company would be providing better functionality than what Apple provides within its own ecosystem. Let's hope that Dell is not using any private APIs that might make Apple disable this functionality.

The update to Dell Mobile Connect with support for iOS screen mirroring and data transfer will be released in Spring 2020. File transfer on iOS devices will be limited to just photos and videos.