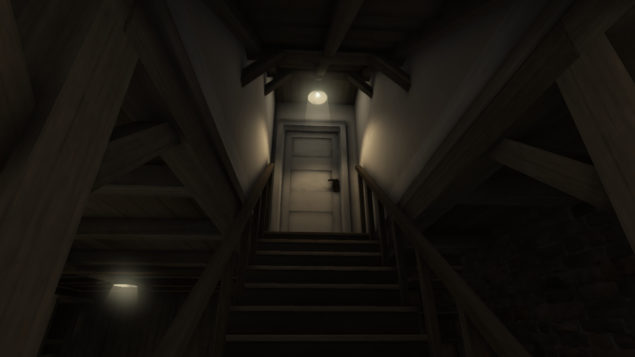 If you're a fan of the increasingly popular first person horror/mystery genre, keep an eye on Dead Secret by indie studio Robot Invader.

The game will be part of the Oculus Rift launch lineup on March 28, though it will also be available for non-VR users via Steam. What's more interesting is that Dead Secret will be cross-buy, so you'll get both versions for a single price of admission.

Who murdered Harris Bullard? A reclusive man with a mysterious past, Bullard was found dead in his study five days ago. Nobody suspects foul play, least of all the police. But you know better: this is murder, and it’s up to you to prove it.

Dead Secret is a story-driven mystery thriller in which you play as an ambitious journalist on a mission to make headlines. To get the story you’ll have to comb the crime scene for clues and decipher the mystery of Bullard’s twisted past. Uncover secret documents, explore the dead man’s home, and piece together the puzzle to correctly name the killer. But keep your wits about you: Bullard took his secrets to the grave, and somebody wants them to stay there. Dead Secret has long been a labor of love for indie developers Robot Invader, who have studied and admired great horror and mystery design for over ten years.

"As connoisseurs of horror we had a lot of fun developing Dead Secret. Dead Secret is a suspenseful murder mystery, but its core design principles come straight from classic horror games." Pruett cites Clock Tower, Siren, and Deadly Premonition as notably influential. "Dead Secret is designed to grab hold of just about anybody, whether they play in VR or on the desktop. Our hope is that fellow fans of classic horror games will particularly relish its grip."

Dead Secret will also be available later this year on PlayStation VR, PlayStation 4 and even PlayStation 3. The launch price will be $14.99 and the PC requirements have been published on the Steam page.