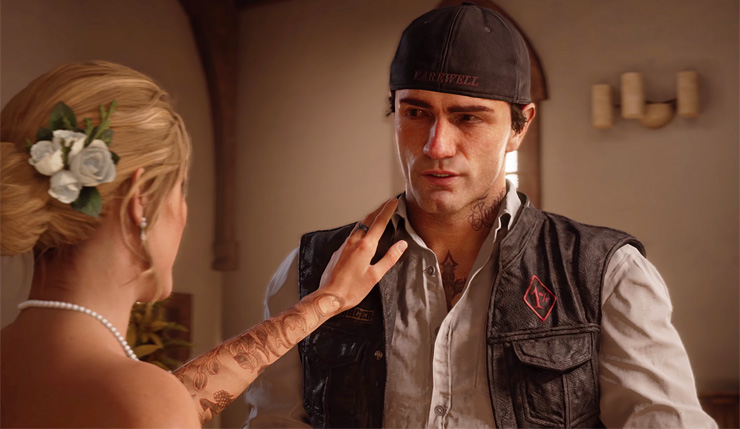 Most of the footage we’ve seen of Sony’s upcoming Days Gone has focused on the game’s open world and intimidating hordes of zombies, but the game also has a relatively in-depth story to tell. We get a taste of that in the latest trailer – Days Gone protagonist visits the now-ruined church where he and his wife, Sarah, were married. We get a flashback to a happier time, but the reminiscing doesn’t last long, as somebody has tracked Deacon to the church. Check it out, below.

The wilderness is where they met, it’s where he taught her to ride, where she taught him about botany (the reason she was in the high desert in the first place.) It’s where he proposed to her. It’s where, in a small church in the tiny town of Marion Forks, witnessed only by long-time friend William “Boozer” Gray, Deacon and Sarah were married. With just a touch, Sarah Whitaker’s charm and sincerity was always able to soften Deacon, allowing him to show his awkward and tender side. A longtime member of the Mongrels MC, Deacon St. John chose to leave the MC and become a NOMAD for her so they could spend more time together. Share a life together.

Two years later, Sarah is gone. Deacon, now a drifter and bounty hunter on the broken road, is left with only a photo to remind him of the woman he loved and the man she had helped him become. In a brief moment of peace at the church where they exchanged vows, Deacon reflects on everything he’s lost, the burnt out shell of the church, a reflection of the man he’s become — haggard, worn, and alone. But in the world of Days Gone, you are never alone for very long. And in a strange way, Deacon seems to welcome the intrusion. Anything, to help him forget his broken vow: “I promise to never leave you.”

Sony recently released some new Days Gone screenshots featuring Deacon and Sarah, which you can check out here. You can also get the lowdown on the game’s special editions and pre-order bonuses here.