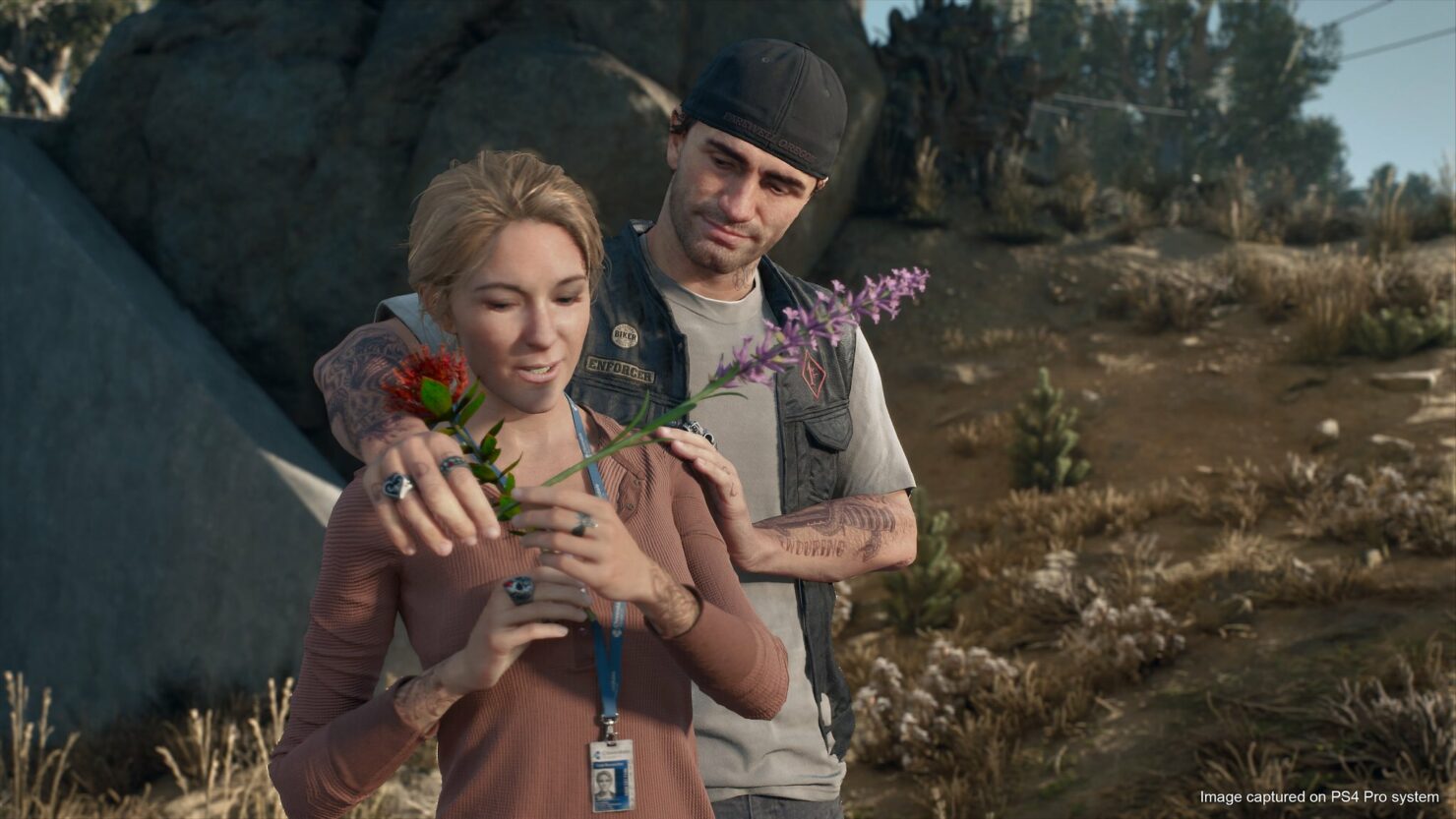 Days Gone, the post-apocalyptic open world PlayStation 4 exclusive in development at Sony Bend, is now two months and a half from its release date.

Sony is understandably starting to ramp up the marketing phase and a few days ago, they've posted a new page entirely focused on the wedding preparations of the game's protagonist Deacon St. John and his wife, Sarah Whitaker. There are a bunch of new and rather beautiful screenshots taken from the PlayStation 4 Pro version of Days Gone, too.

Deacon St. John and Sarah Whitaker were an unlikely couple: He was from rural Oregon, a member of an outlaw motorcycle club; she was from Seattle, a botanist with a degree in biochemistry. But from the moment they met, on the back roads of Farewell Oregon, they were inseparable.

Now they’re ready to ride off into the sunset and face the next chapter of life together as man and wife.

Unfortunately, the marital bliss isn't destined to last. According to the storyline shared by Sony Bend, the wedding took place a few years prior to the zombie outbreak and at some point before the game's events, his wife died. Chances are the screenshots were grabbed from a flashback section of Days Gone.

The game is out on April 26th. Until then, check out Dave's recent hands-on preview for his impressions.

A Dynamic World
Using the power of PlayStation 4 and Unreal Engine 4, Days Gone offers an incredibly realistic and detailed open-world action game experience. Vast and hostile environments can be fully explored on the back of Deacon’s drifter bike. Abandoned vehicles can be searched for useful items. Towns and buildings can be entered and searched – at great risk. All lighting is done in real time – eye adaption technology creates a real sense of dread when entering dark buildings; day and night have an impact on the experience; weather affects enemy behavior.

Brutal Sandbox Combat
Exemplifying true, free-form gameplay, Days Gone offers freedom to explore, strategize and play “your way.” Every challenge can be approached and completed in an almost infinite number of ways. Many different items and weapons can be crafted using items found in the field, including brutal melee weapons and traps. Customizable weapons and skills offer true freedom in how the game is played.

Unique Enemies
In addition to human drifters, marauders, and other groups, Deacon must face a wilderness overrun by Freakers – mindless, feral creatures, more animal than human but very much alive and quickly evolving. Freakers have needs, habits and behaviors that the player can learn and adapt to.

Unique Setting
The harsh high-desert of the Pacific Northwest offers a large variety of environments in a single geographical area. One minute Deacon can be riding through a pristine forest, a snow field, a lush meadow, and the next, be in the harsh desert lava fields. The hazardous environments, scarred by millions of years of volcanic activity, are defined by ancient lava flows, mountains, caves, cliffs and river basins, delivering a breathtaking backdrop to an equally diverse style of gameplay. Cinnabar mines, lava tube caves and small rural towns offer a variety of environments to explore.