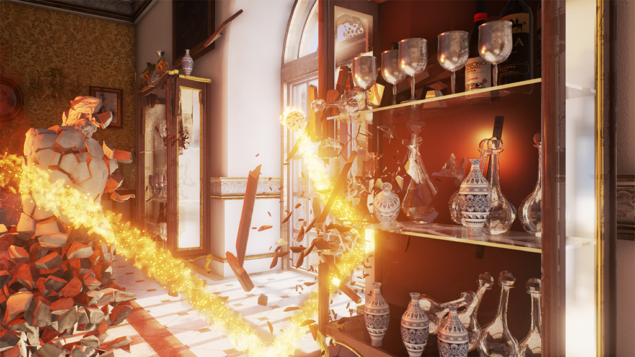 A few weeks ago, we reported a few tidbits on the first game developed by Three Fields Entertainment, a British studio composed of former Criterion developers. That game has now been officially announced and it's titled Dangerous Golf.

Here's their official description of this peculiar game project.

Dangerous Golf is an irreverent, silly, fun approach to golf games that challenges players to break the rules and wreak havoc on more than 100 holes in four unexpected locations.

It’s as serious a golf game as Burnout was a serious simulation to driving games. We wanted to mix the attitude of Burnout with the destruction of Black whilst setting the golf ball on fire — a nod to NBA Jam. This type of gameplay is part of our DNA, and something we think our fans will truly enjoy.

In Dangerous Golf, players aren’t striving for Par or aiming for Birdie — they’re playing for dollar damage as their high score. As they progress throughout the game, players will not only be awarded points for trick shots and ricochet techniques, but they’ll also get rewarded for destroying stuff by turning their golf ball into a bomb and setting off their SmashBreaker. Destructive powers increase as the ball heats up, ensuring that the most elaborate shots are not only the most rewarded, but the most impressive to watch.

The action takes place in a series of elaborate indoor and outdoor locations including a hotel kitchen, a glittering palace ballroom, a rural gas station and a stately medieval castle. Featuring turn-based play in both on and offline multiplayer, Dangerous Golf awards points based on destruction, encouraging players to get creative as they wreak havoc in an effort to increase their score.

What's even more exciting is that Dangerous Golf will use cutting edge technology, such as Epic's Unreal Engine 4 and NVIDIA's PhysX, APEX and FleX.

Our team worked closely with both Epic’s Unreal Engine 4 team and Nvidia to not only push the boundaries of their PhysX, Apex Destruction and Flex technologies, but also to deliver a truly physics based game experience.

Dangerous Golf will be available in May 2016 for PC, PlayStation 4 and Xbox One. For the PC platform, Three Fields Entertainment's Creative Director Alex Ward mentioned to Videogamer that they're targeting high end configurations:

Obviously previously when we were doing multiplatform games with a fixed end date, you would always de-risk the project as much as possible, which meant you couldn't do anything special on each one. But now we're an independent company we're targeting very, very high-end PC. We've got an incredibly powerful dual-Titan X-powered machine here we've been developing on. The guys here are mostly ex-Criterion. We have some ex-Disney and Ubisoft as well. We've always been about pushing the hardware as hard as we can, going right back to PlayStation 2, so we want to push hardware really hard and pull out all of the stops on all of the versions we're making. So we're doing PC, PS4 and Xbox for this first game.

Needless to say, here at Wccftech we're big fans of those games pushing the technology forward and we'll try to bring you more information on Dangerous Golf soon.