It's very likely that you are all, by now, watching the live stream of Cyberpunk 2077. That's perfectly understandable to me, everybody is excited and wants to keep seeing more of the game. Well, the video you'll be watching now is, should last year be anything to go by, the same that I was able to see while at Gamescom earlier this month and likely similar to that which was on show at E3 earlier this year.

Much like my impressions of the game last year, what I saw this year has left me wanting more. There's no doubt that CD Projekt Red knows how to build anticipation, though the quality of the studio and their titles does that by itself. Still, let's talk Cyberpunk 2077, Night City and the journey to Pacifica. 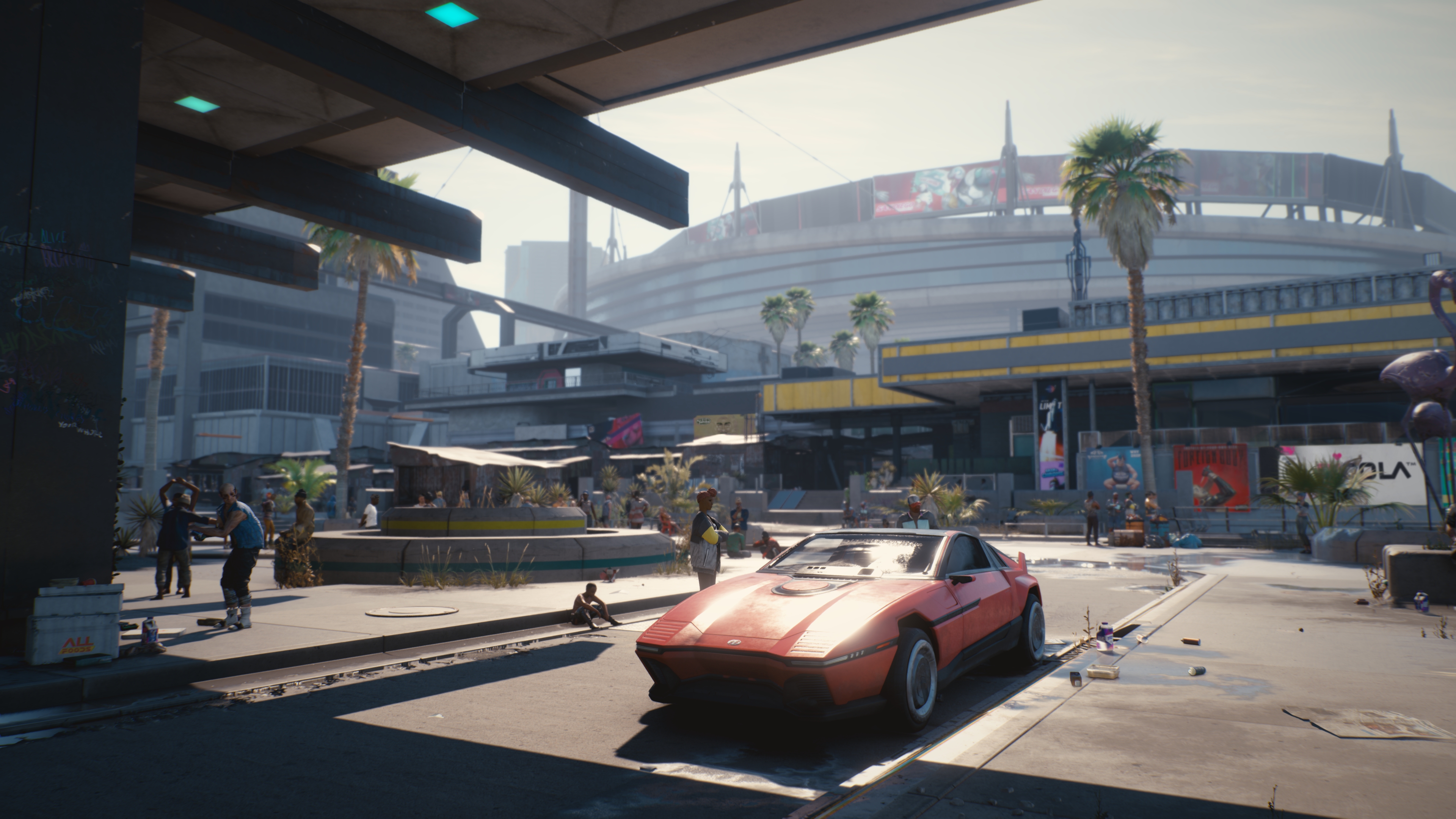 So right off the bat in this new preview of Cyberpunk 2077, we're in a new area of Night City, an area called Pacifica. Pacifica could be the dictionary definition of over-reach, an area where the promise of grand towers, attractions and more would bring people from near and far. Now, it's a place where the lowest of the low live. A place where, in parts, even the police and corporations dare not venture. So what, you would reasonably ask, are we doing here?

Well, we've got a job to do. After having a good chat with the ghost (or at least a digital manifestation?) of our good friend Johnny Silverhand, we need to link up with the leader of a gang known as the Voodoo Boys. These essentially run Pacifica, keeping it as stable as the place can be, but there's a twist. A gang known as the Animals, so named due to their respect of brute strength and the use of whatever tools and augmentations they can to boost this strength, have occupied a portion of the Voodoo Boys territory. This is something they wouldn't normally do, so what's led them to this now?

That's exactly what you're sent in to find out. It would be quite generous to say that you were asked to do said thing, in reality, you're not given an option. Nor are you given an option in allowing another character to enter your... circuitry? Brain? Oh, I don't know. Whatever's in your head. But that's all by the by, you don't want to hear about the story behind the mission - you want to find that out yourself. You want to hear about the game, how it plays and how it looks. That and you've probably just been watching it as well. 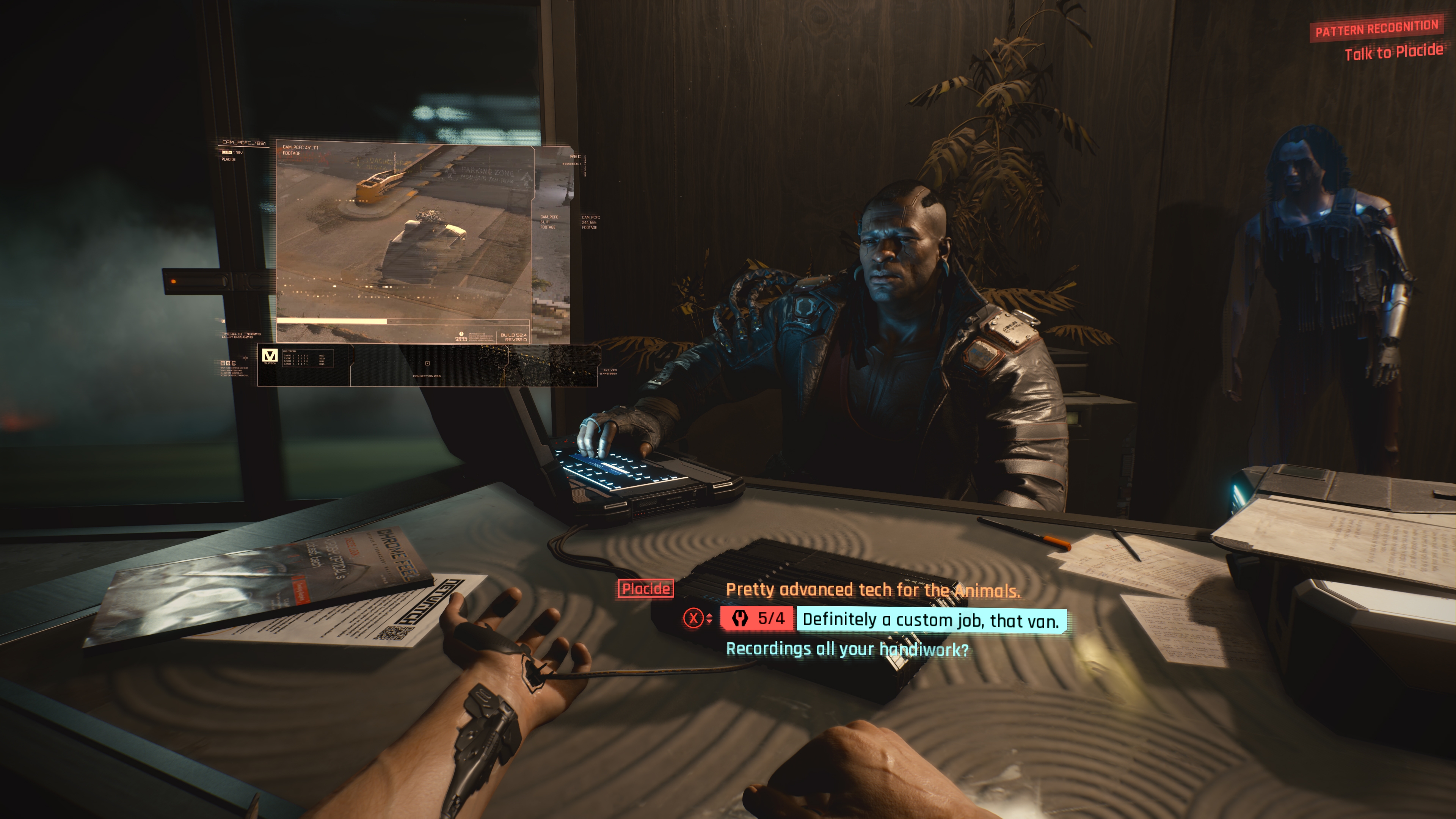 Let's not mince words here, it's probably the best looking game there is. The fact that this is going to be an open-world game and have the potential to look this good astounds me. It must be a complete beast of a machine, what CD Projekt Red are running it on. I can't imagine consoles being able to run it at this fidelity, particularly when you're shown the open world and driving aspects of Cyberpunk 2077. They were quick to hop on a bike and show the driving off, flicking through the radio stations and explaining that it'll be possible in the final release to drive around for hours, listening to the radio, just looking for side quests and whatever else you want to do.

Granted, here there wasn't such frivolity. We had a job to do and we were going to do it. It was time to head to The Animals and the place they were holding up, finding out why and what exactly was in a van that was linked to them. It was time to infiltrate, one way or another. We were shown there was a mixture of both stealth and blunt, with the devs having created two character templates. One was a stealthy netrunner character, the other just liked murdering the living hell out of things.

This division of characters was quickly explained as being just for the demo purposes, with the final game allowing you to create your own character in any way you like. The freedom offered lets you have a mixture of what you want, focus on whatever you want and cybernetically alter yourself however you want. How you choose to balance your character and what to upgrade them with will have so many implications on the options you have, even on something as simple as infiltrating a building. 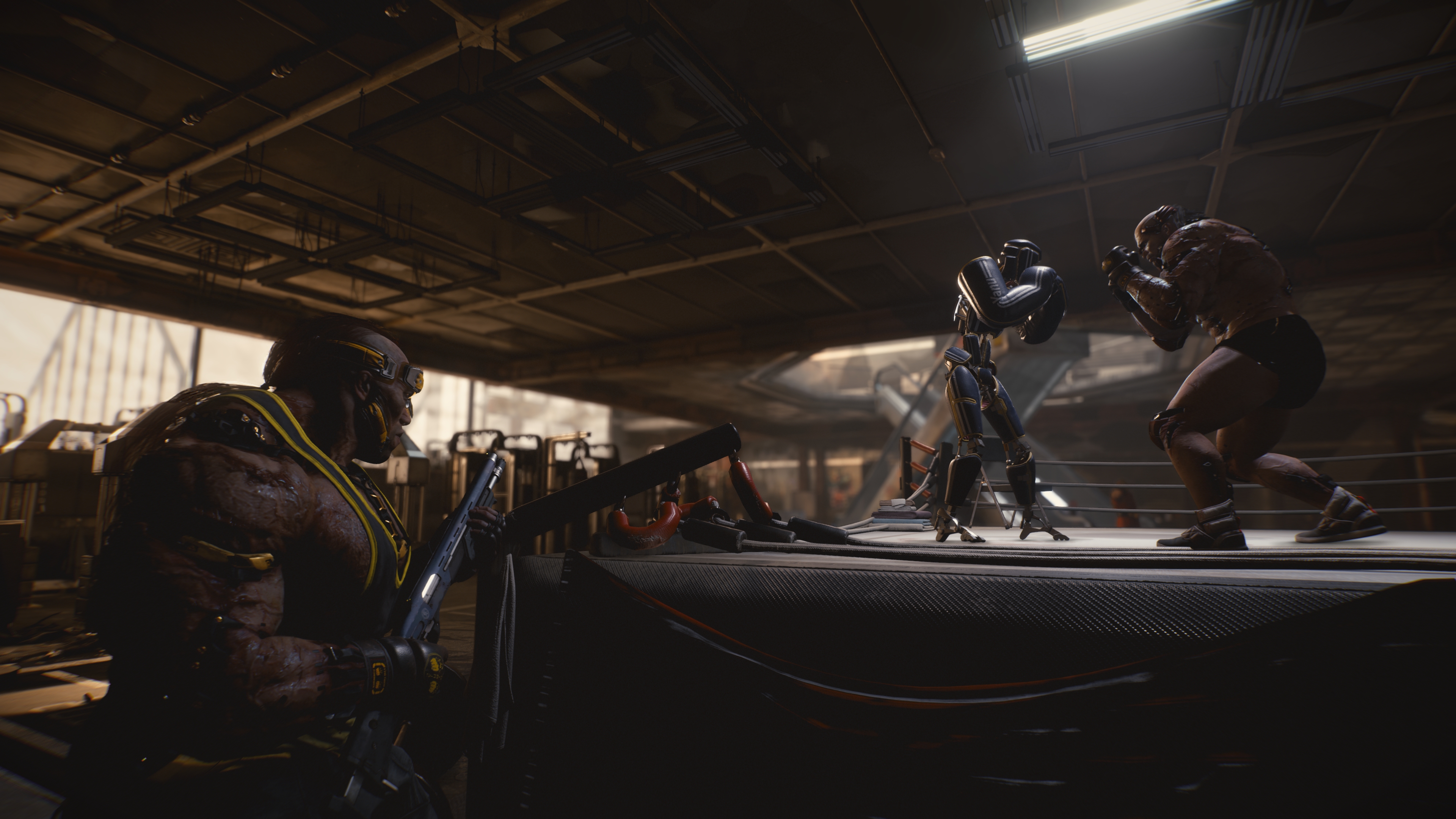 Here, the option was taken to not attempt to bust through the front door, slaughtering everybody, but to first go sneaky and enter in the back. Here you're shown how you may have the option to use the environment, provided you have the abilities, to your advantage. Turn off security cameras, force a vending machine to spit out drinks and distract guards, maybe make a boxing robot knock out somebody or possibly even cause a fatal accident as you dramatically increase the weight of a bench press, causing it to slam down on the persons head/throat. Other abilities can include bat-like super-hearing, telescopic vision and who knows what else. The options are seemingly limitless.

Even this, a stealth-oriented character, can be pretty damn effective in combat though. The nanowire is a brutal weapon, letting you use it like a whip, literally severing the limbs of those who are coming to do you harm. Then again, if you haven't been spotted you can also use this nanowire as an extension of yourself, letting you hack into an enemies brain as well the whole network that character belongs to. Doing this can lead to big trouble for anybody lower in the hierarchy than the said person, particularly if they don't want their own body parts turned against them.

That or you may have a character that likes to use a bit of force. Not bothered about the security camera? Easy, why not just use your cybernetically enhanced arms to find another route, ripping a huge steel door off of its hinges and opening up a new path. Here's where we also got to see some more close-quarters combat and gunplay. There's no doubt that Cyberpunk 2077 revels in its violence, it's not afraid to show viscera, nor does it shirk away from giving the weapons a real feel and sound of something heavy hitting.

I will say that watching the combat makes it seem like it could be quite chaotic. Chaotic, but it looked like it should be fantastic, as you slide along the floor after sprinting at superhuman speeds, blasting away or destroying in melee combat any who get in your way. You can see the rubble as your surroundings are destroyed, bodies flying through the air. It looked great. This isn't to say that there weren't any issues, it's early days, but there seemed to be a few issues with NPC enemies movements, but all of this will undoubtedly be fixed by release. 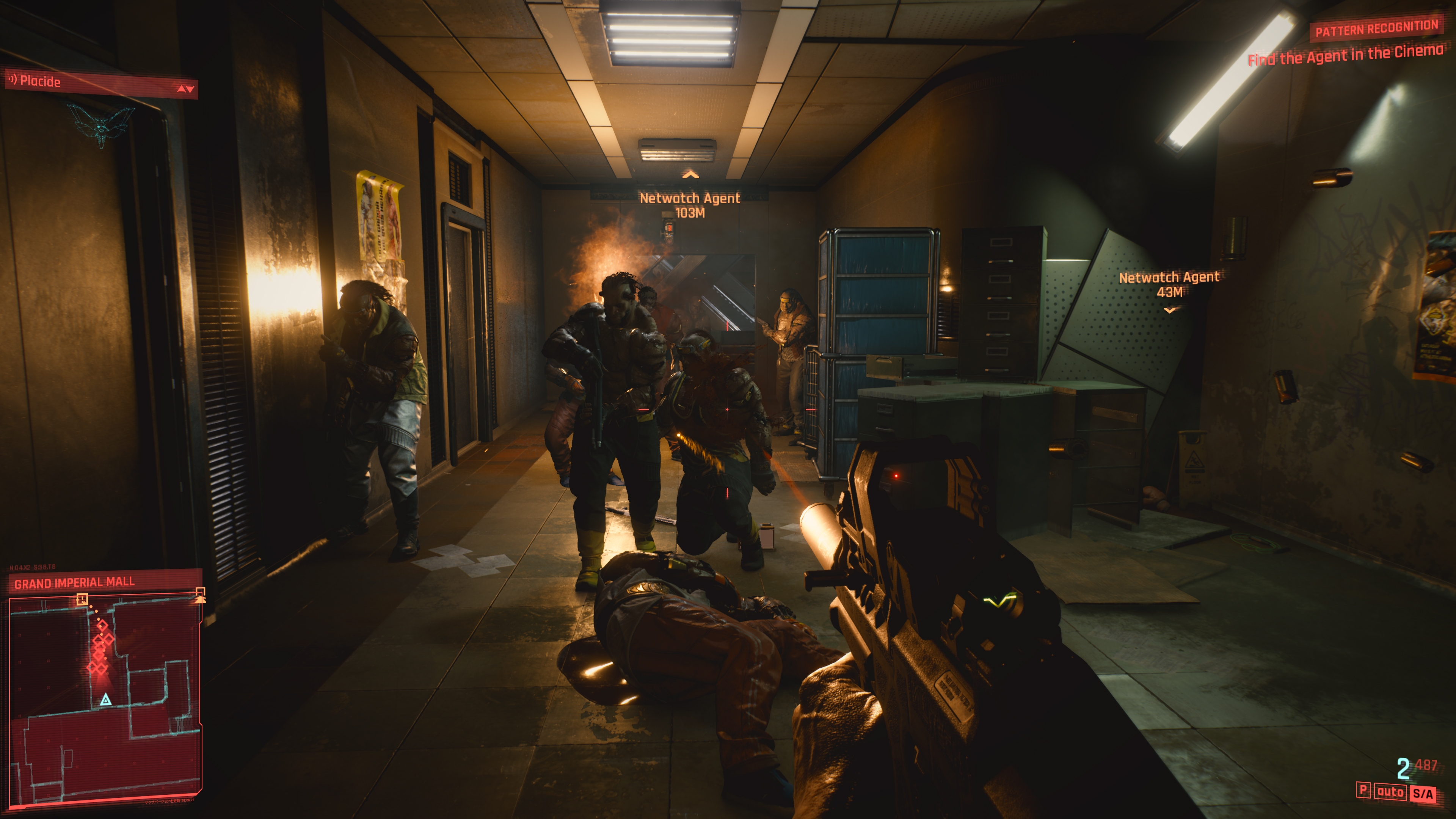 Moving slightly back to the story and the choices available, like last year it was shown how you could choose to betray the Voodoo Boys, should you want to. You could side with the Netwatch agent, the one who was essentially controlling The Animals and keeping them in position as his own personal protection. How these options would impact things further in the game, it's impossible to tell, but it does seem that they will.

Scheduled to release on the 16th of April, 2020, Cyberpunk 2077 is coming to the PC, PlayStation 4, Xbox One and Google Stadia.