Finally there is some great news for Google Nexus 4 users looking to get Android 4.2 Jellybean based CyanogenMod 10.1 on their phones. Since there are scores of developers who are already forking out stuff from CM repository to include in their own ROMs, so CM’s team has decided to bring the official nightly builds officially for all CM fans. According to the message posted on CyanogenMod’s official Google+ page, the nightly Android 4.2 Jellybean based CyanogenMod 10.1 custom ROM’s nightly builds are in the roll-out phase. The main reason for this Roll out is the massive demand of Nexus 4 users for CM who are already opting for 3rd party developers to cruise with CM 10.1 features and stuff. 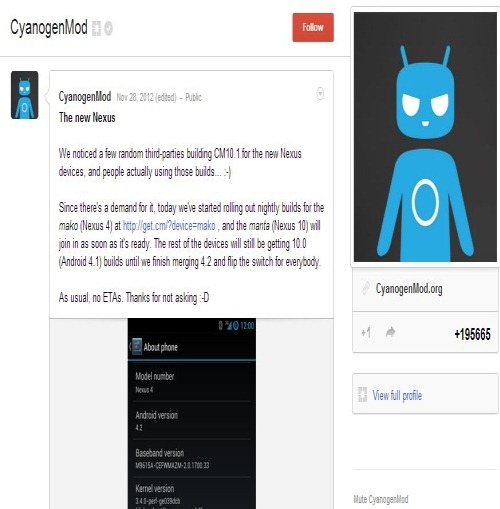 For those who aren’t aware, CyanogenMod is a parallel operating system for multitude of Android devices that is based on AOSP source code and is meant to streamline, optimize and stabilize the user experience. CyanogenMod, today, is the most preferred custom ROM amongst millions of Android users who have root on their device and were looking to enhance their Android experience. 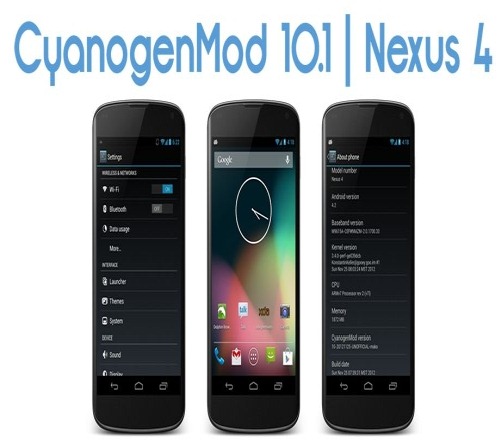 According to KonstantinKeller, recognized Android developer and XDA contributor, Wi-Fi – Data – GPS – Bluetooth – Camera – NFC – Android Beam – Call Radios etc. all work in these nightly builds. This ROM can be your daily driver and the only bug identified till now is unavailability of gesture typing that many of us can live without. However, the nightly builds are meant to be escalated to release candidate version and before that they can be broken and you’ll find very less support to fix it.

Before moving beyond this point, you understand that this ROM is a nightly and it can very well break your phone. You also understand and affirm that all responsibility, no matter what good or bad happens due to flashing this ROM on your phone, rests on your and we nor the developer will be responsible for any loss of functionality whatsoever.

Here is the step by step guide to install Android 4.2 Jellybean based CyanogenMod 10.1 ROM on your Google Nexus 4:

And that’s it! Once your phone reboots, give it a couple of minutes to settle the ROM down. And you’ll be experiencing the awesomeness of CyanogenMod 10.1 Android 4.2 Jellybean on your Google Nexus 4.

In case you are stuck or want to have some more information regarding CM10.1 installation on your Nexus 4, please head to the official XDA tutorial thread posted in the last line of this write-up.