Crash Bandicoot Will Rise Again (or Not)

A screenshot has been making the rounds over the internet, which depicts the silhouette of Crash Bandicoot with a release date of 11-24-15 and the phrase "He will rise again." The PS4, PSVita and Naughty Dog logos appear at the bottom of the image. 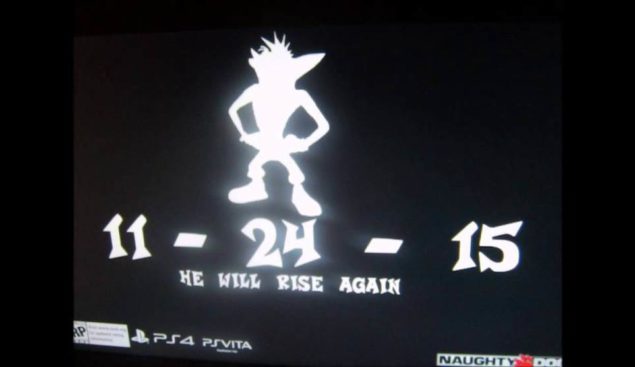 Naughty Dog produced the Uncharted series and the recent masterpiece The Last of Us, and are now hard at work on Uncharted 4: A Thief's End for the PlayStation 4. The studio has stated that they don't intend to go back to the cartoon look of earlier games but rather focus on providing more realistic experiences.

Activision owns the rights to Crash Bandicoot and while Sony could be in talks in acquiring back the franchise, without Naughty Dog back on board, it seems a bit underwhelming. The fan demand for the return of the iconic marsupial is indeed huge though, so if this has any chance of being real, it could be some sort of a remastered version of the classic titles.

The PS4 and PSVita logos do suggest that we could be looking at a remaster rather than a brand new title.

Chances are though that this is just a fake, taking advantage of the buzz surrounding the upcoming E3 2015 event. Regardless, Sony is surely going to have one explosive press conference, with many announcements and game reveals.

We will  bring you any new information on Sony, E3 2015 and the supposed return of Crash, as soon as it becomes available.