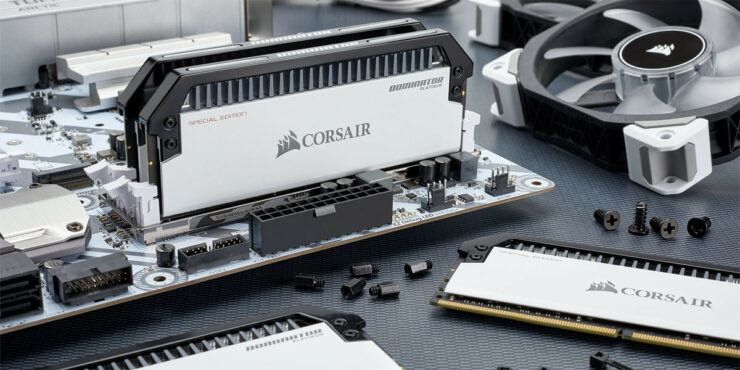 Dominator Platinum Special Edition CONTRAST is built to standout when it comes to performance, just as much as styling. Available in both dual and quad-channel kits, Corsair says every module is rated for 3,466MHz using carefully screened and selected Samsung memory which is most likely B-Die, they also specify Intel systems spouting that they are ready to push the latest Intel platforms to their limits. Combined with Dominator Platinum's industry leading 10-Layer PCB and patented DHX cooling technology, the result is DDR4 memory with performance that invites overclockers to push it even further.

While frankly very expensive at over $400 USD the kits are absolutely stunning and would make a great complement to a themed build. Many in the comments section will mention that other kits from other manufacturers would be cheaper, and for the most part they are right but the ultra high end builds that pack dual 1080TI's a high end CPU and a premium motherboard would look fantastic with this kit, as well as it probably a quite good overclocker.

The only kits listed are two 32GB kits, both clocked at 3466MHz with one being quad channel 4x8GB and the other being dual channel 2x16GB. Pricing data is below.

Dominator Platinum Special Edition CONTRAST is initially available exclusively from the CORSAIR webstore in the United States, UK and Germany, and is backed by a limited lifetime warranty and the CORSAIR worldwide customer support network.