Intel's first six core processor, codename Gulftown (I wonder if there is any similarity between this CPU and US/Iraq war) has gone on sale in Germany when an online store was spotted selling the latest CPU. Core i7-980 Extreme Edition chip is the first six core chip which is targeted towards extreme consumers for everything.

According to PC Advisor, when contacted, Intel did not comment on this new development. The processor is priced very steep at €1.099 (US$1483). It is also reported that this new processor holds 12MB L3 Cache and each processor will be able to run 2 threads simultaneously, which means that there will be effective 12 Cores working in the processor. 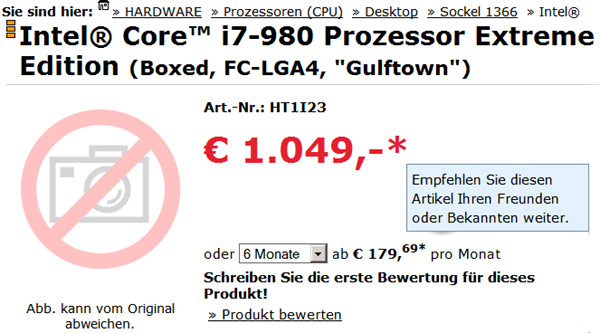 The only six core processors sold by Intel so far were for servers. Intel has been dominant in the PC market and have recently been charged and convicted of monopolizing the consumer market against its rival AMD.