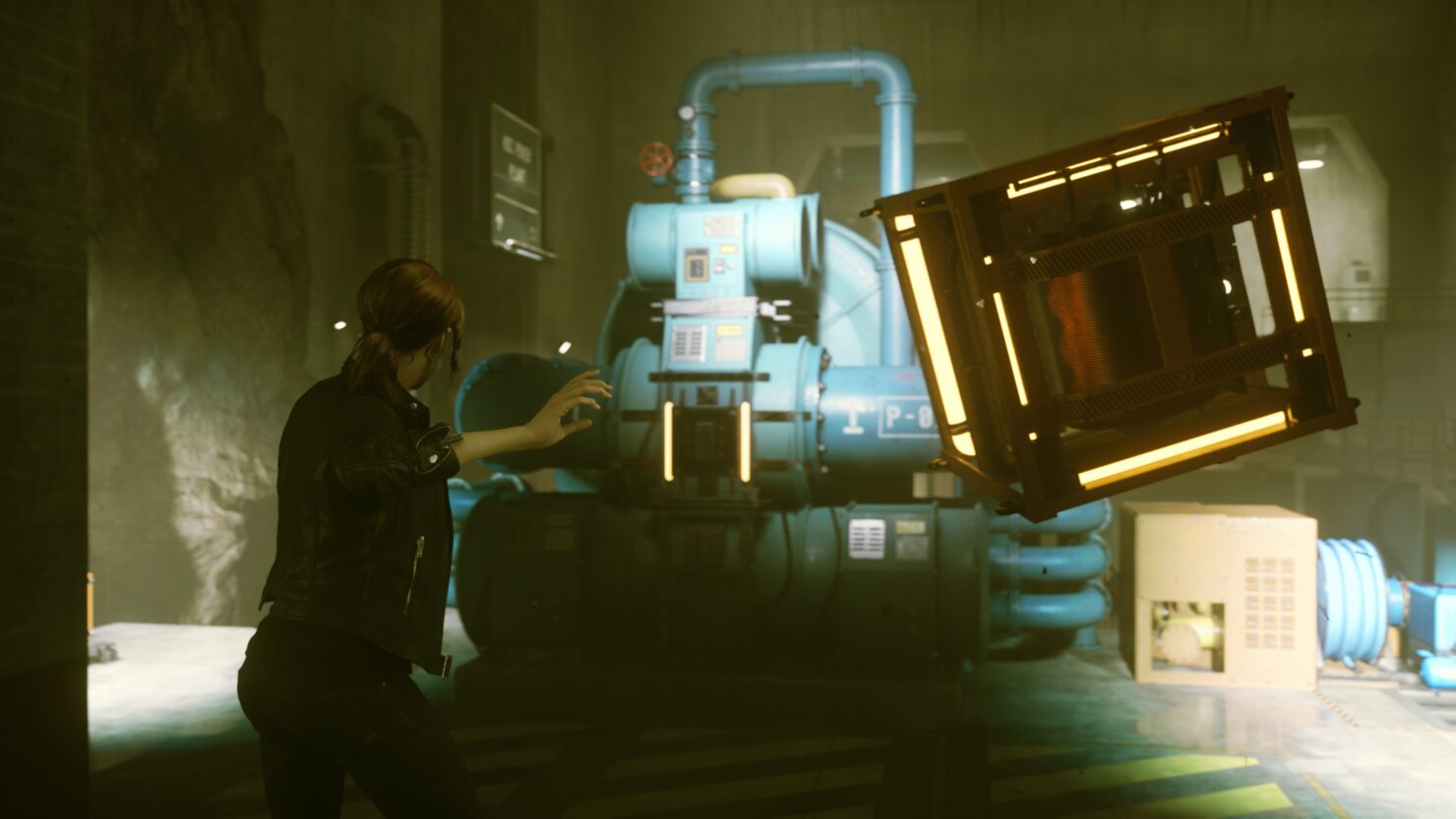 Control, Remedy's first multiplatform game since 2003's Max Payne 2, was one of the most polished games we were able to check out at E3 2019.

Admittedly, we would have been surprised to find out the opposite, given the game's close August 27th release date. Still, we had lots of fun playing the Directorial Override mission available in the demo, mostly thanks to the combat system (which received our award for Best Action Game at E3 2019).

It has been quite a long time since any developer truly nailed telekinesis-based powers in an action game. Remedy managed with flying colors even if the demo only included the most basic power of all, Launch, which lets protagonist Jesse (played by Courtney Hope, returning from Quantum Break) hurl all kinds of objects at her enemies with crushing force. Needless to say, we can't wait to check out all of the powers available in the final game once Control ships next month.

Control has solid shooting mechanics as well, evidently based on the foundation of Quantum Break. This is no cover shooter, mind you, and there is no regenerating health either for Jesse. That's because Remedy wants to push players to be aggressive, as defeating foes is the only way to regain health.

The game looks amazing, too, at least on PC where it includes real-time ray tracing for contact shadows, diffuse global illumination and reflections. It could potentially look even better at higher resolution, as the demo ran at a native resolution of 2560x1440 but the rendering resolution was the lower 1920x1080, likely because of the performance hit of having ray tracing enabled.

Hopefully, the developers can successfully optimize the ray tracing performance before launch up to a point where it runs smoothly even at 4K resolution on the high-end GeForce RTX graphics cards. In that case, Control could be a great technology showcase for NVIDIA.

Judging the story, on the other hand, isn't really an option after such a brief session. Still, it was nice to see that Remedy has added dialogue options even if they don't affect the story like they would in a role playing game. This allows those interested in diving deeper into the lore to easily do so by conversing with the NPCs while more action-oriented gamers get the chance to opt out.

After the hands-on, we interviewed Game Director Mikael Kasurinen and Narrative Designer Brooke Maggs to learn more about the underlying themes of the game.

Let's start with the name itself, Control. While playing the game, I noticed that you actually cleanse these so-called control points in the game. How does that relate to the title itself? Is the game all about regaining Control, both for Jesse and the Bureau?

Yeah, the word control has a deep meaning to our experience overall. When you look at Jesse and what she's capable of doing, she can control the environment through her powers, she can also control the minds of the enemies, turn them against each other, and so on. And then on a thematic level, the plot itself is all about control, losing control, and then trying to take control back. So that's deeply part of the overall feel of the game. And yes, control points are just a very kind of clear and concrete visualization of certain spots in the building that the Hiss, the supernatural force, has corrupted. And then what Jesse can do is cleanse them pushing that away. And then the building kind of restarts itself when you do that.

Okay, so when you cleanse these control points how does that affect the game overall?

So basically, what it allows you to do is once you have cleansed a control point... What the Hiss has done when it has taken over a control point is kind of warping the environment around. After you cleanse the control points the building shifts back to what it was. And it allows you to get kind of further into the building, it also acts as a fast travel point, so after cleansing them then you can immediately traverse from one to another if you want and you can also construct your different weapon forms in it as well. In Control you have this one shape-shifting weapon called the service weapon. And it's only one weapon, basically. But as you find materials and then go to control points, and then unlock more different tools that you need. Then you can also upgrade your abilities as well. There are different ability trees.

Yes, I unlocked the dodge move. I had noticed from the controller layout that there was a button dedicated to dodge, but it didn't do anything until I unlocked the move.

Yes, when this mission starts Jesse has only one ability, which is the launch. Everything else you need to find separately for yourself.

With regards to the narrative of Control, is it going to be fully linear? I noticed that there are dialogue options with various NPCs. Are those just to learn more lore, or can you actually affect the story in some way?

You can't affect the overall trajectory of the story. But what's new about Control for us is that we're telling the story with the main character arc, but also with side missions, as well documents, audio logs, videos in our world. So you can go back and talk to characters and find out more about the world if you want to. But then also side missions build out those characters, who they are, and you learn more about the world. And then the main missions take you through Jesse's journey as the new Director.

During this showcase, we were told that Jesse actually already had an encounter with the supernatural earlier in her life, so I'm assuming that affected her choice to join the Bureau, right?

Right. In her childhood, she had a brother and they experienced a strange supernatural event. Something weird happened in the little town they were living in, Ordinary. When that event happened, what they do at the Bureau is that they investigate, research and contain these types of phenomena. So they got there and basically took her brother, while she managed to escape that situation. Ever since then, she's been wondering what happened to her brother. Years and years after that moment, she finally found the headquarters of the Bureau. And now she's entering that place wanting to get answers about what happened, she comes in without knowing anything about it. She's basically a civilian, though she has seen the supernatural, and she knows that strange things exist. And she lived her life as an outsider. But as she enters this place, she enters this new world, basically. And quite quickly in this experience, she becomes the Director because she's able to pick up the Guide after the previous director has been found dead. And she survives that moment, which means that she is now the Director, and then the story kind of goes from there.

It's kinda like Thor's Mjolnir, right? Being able to carry the hammer means you're worth it.

Right. There's also the legend of the Sword in the Stone, whoever is able to pull out that becomes the king. So there's a kind of a symbolism there of course and as she becomes the Director, it's not necessarily the first thing on her mind but she wants to find out what happened to her brother, she's kind of using then that new authority to try to figure that out. And as she goes about trying to deal with Hiss and everything that is going on, she of course learns more about what it means to be a Director.

One of the new additions in Control is the presence of side quests. In those missions, can you aid NPCs who are in need of saving, basically?

Is it an option to deliberately choose not to aid them?

It's not like you fail a side mission if you, for instance, choose not to help a person who is in trouble. There's one, for instance, that we showed last year, there was this person staring at the fridge. And at that time, Jesse chose to kind of go ahead, but she said she would send help later on. What you can then do is return and help later if you want to. There is no concept of failing missions, per se. It's only a matter of when you choose to do the side quests if you want to.

Okay. Is there any 'point of no return' after which you can no longer do some side missions anymore, though?

I noticed that Jesse tends to speak to herself during dialogue. Why did you choose this narrative style?

Because Jesse has experienced this supernatural event in the past, I guess she's felt like a bit of an outsider in her world until she's coming into the Bureau, which means that she's become a very closed off character, it's very hard for her to trust people. So one way for us to play that out and find out more about her personality is to use the narrative technique of Jesse being able to talk to herself so that you know what she's sort of thinking during dialogues.

Would you say that the supernatural element is dominant in the game?

Yes, it is the main kind of, let's say, opposition in the game that you face a lot. And what's peculiar about it is that it's a new thing that nobody was prepared for. So it managed to take over the entire headquarters and almost every single human within it. There were some people that managed to survive that, you do meet some of them here in the demo. They have these HRI devices that protected them but they didn't know what they were even for as they received them. So there's something going on there that you know, we don't want to talk too much about yet. But it is a new type of a threat that is very dominant and taking over everything so it's a massive crisis for the Bureau.

Control will be among the first games to adopt real-time ray tracing. Was adding it to your engine difficult for your developers?

It wasn't actually that difficult once we kind of felt and chose that it was a worthy thing for us to add into the game. It was fairly straightforward. We worked together with NVIDIA and they were a great help. What was interesting was that it didn't actually have a lot of impact on the production of the game in any way even though it wasn't planned. We didn't choose until like a year ago that that was something we were going to do, which is when the team pretty much walked independently and went to NVIDIA to make it happen.