Control, the third-person action/adventure game by Remedy due on August 27th, became available for pre-orders a while ago. At that time, publisher 505 Games revealed that the PlayStation 4 version of Control will get a wholly exclusive mission and timed exclusive access to the two expansion packs (The Foundation and Awe) compared to the Xbox One version of the game. 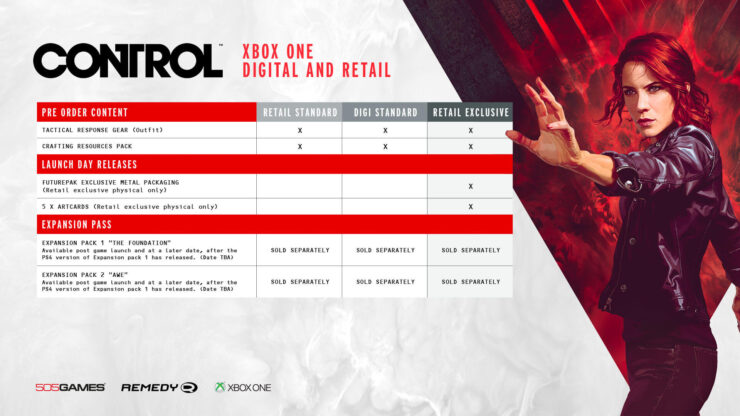 Dave recently got to interview Thomas Puha, Communications Director at Remedy Entertainment. While discussing Control, he asked specifics about this choice. As it turns out, the timed exclusive period PlayStation 4 users will enjoy shouldn't be 'very long'.

So there’s one exclusive mission in the digital deluxe PS4 version, and then the expansion pass is kind of tied to that. But outside of that, one costume, the side mission, and the digital themes, the game is the same on all platforms, and all the expansion pass will be available on all platforms, but I can’t say what the exclusivity window is, except it’s not very long. So, again, we’re consumers as well at Remedy and the core game is the same for everybody. Again, many publisher and business reasons for doing certain things.

Control is also going to be an exclusive for the Epic Games Store on PC. Puha had the following to say about that.

You’d have to talk to the publisher about that. There’s been a long relationship between Epic and Remedy, and whenever these disruptive kinds of things happen, some people are upset. From our perspective, I mean, we’re consumers as well. So I mean, we get some of the frustration, but at least from Remedy’s perspective, we’re still multiplatform. You know, you can still play the game on PC, PlayStation 4, Xbox One. I think the main concern for us is; let’s just make Control as good as it can be. Right? That’s the main thing. We are worried about making the game as good as it can be.

Are you planning to get Control once it comes out in about three months and a half?