Things have definitely started to get interesting in Samsung's Galaxy Note 5 territory. After being done with its flagship smartphone launches for the year 2015, the Korean electronics giant should now have all its attention focused towards its premium phablet category. The Galaxy Note 5 has been the feature of countless leaks, rumors and speculations so far, and today we add two more to the mix. Not only has word of an expedited Note 5 release started to become more frequent, but we've now started to hear some word about its front camera as well. 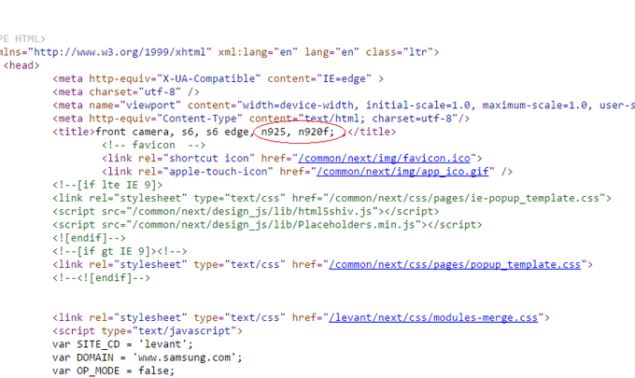 Starting from its front camera, folks over at techtastic.nl have made a rather interesting discovery today. While digging around the HTML file for the Galaxy S6's support page, the front camera on the device apparently appears to support more devices than just the S6. As you can see in the snapshot above, support for two more devices, with internal codenames N925 and N920F. These have been said to represent Samsung's internal language for the Galaxy Note 5 so things do seem to be pointing towards an increasing front camera resolution for Samsung's phablet.

We also saw the Wall Street Journal report earlier that Samsung's going to bring the Note 5's launch ahead of the IFA this year, in order to better counter the iPhone 6 Plus. However, Samsung's very own JK Shin was quick to counter this piece of information, which left little doubt in the minds of any one. But, sources have started to speak up again, and this time word on the street is that Samsung's looking to launch both the Galaxy S6 Edge Plus, its larger screen variant of this year's Galaxy S6 Edge and the Galaxy Note 5, in August. If these sources turn out to be correct, which sounds unlikely given such a strong reply from Samsung, then users might have more than one Samsung device to choose from in less than a month.

Both the devices are expected to come in the same screen size category, and have little differences between them except the usual processor and design details. While Samsung users might be in for a good bit of luck, as the Korean manufacturer launching two very high end devices at the same time will help its popularity, the question of both of them performing equally well simultaneously still remains. Our bet is that the Galaxy Note 5 will end up largely outperforming the Galaxy S6 Edge Plus, given that its the next in line for the Note series and that it features Samsung's very own, one of a kind processing chip. Thoughts? Let us know what you think in the comments section below.