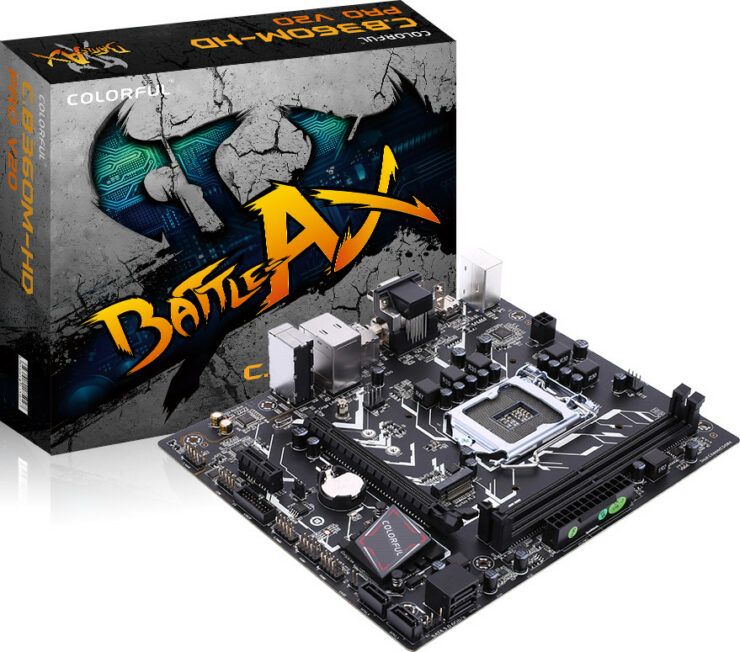 COLORFUL A company well known in China and part of the European market is a professional manufacturer of graphics cards, motherboards and high-performance storage solutions. Colorful is proud to announce the release of its newest motherboards that support Intel LGA1151 8th-gen Core processors. COLORFUL is following up its Battle Axe C.B360M-HD Deluxe V20 release with a pair of new motherboards with the Battle Axe C.B360M-HD Pro V20 and C.H310-K Pro V20 joining COLORFUL's great offerings of motherboards. The new Intel B360 and H310 chipsets now expands Intel's 8th-gen offering to be more accessible to those looking to build an essentials-only PC capable of delivering the performance expected from the new-generation of processors.

Another Entry Into Colorful's Motherboards On Coffee Lake, Surprisingly Not Very Colorful With All Black PCBs

COLORFUL is aiming to give gamers a new entry path to COLORFUL gaming experience with the new Battle Axe series. The new Battle Axe C.B360M-HD Deluxe V20 motherboard features support for the latest 8th-gen Intel Core processors including the new 6-core Core i7 and Core i5 models.

The COLORFUL Battle Axe C.B360M-HD Pro V20 supports up to 65W TDP processors and has a full array of connectivity options to bring all the essentials you need to get your system up and running. A full combo of USB3.0 and USB3.1 gives users the high-speed connections they need with their devices. A PCI-Express 3.0 x16 Gen3 slot also allows modern graphics cards to deliver their maximum performance via the new COLORFUL Battle Axe. C.B360M-HD Pro V20. The motherboard also supports PCIe x4 M.2 devices for high-speed storage.

COLORFUL's new C.H310M-K PRO V20 welcomes all new system builders with an entry-level option that serves all the essentials they need to create a modern system without breaking their budget. The COLORFUL C.H310M-K PRO V20 supports processors up to 65W TDP and features Intel's H310 chipset. The board supports up to 32GB DDR4 with speeds from 2133 to 2400Mhz. Modern GPUs are welcome with PCI-Express 3.0 x16 Gen3 slot enabling high-speed PCIE devices to fully achieve their rated performance.

Colorful says the motherboards will be available in select regions. I assume mostly Asia and parts of Europe. As for pricing they remained hushed. You should expect to see the boards on store shelves in the coming weeks.

Colorful Introduces Three new AMD B550 Motherboards Under $150 US