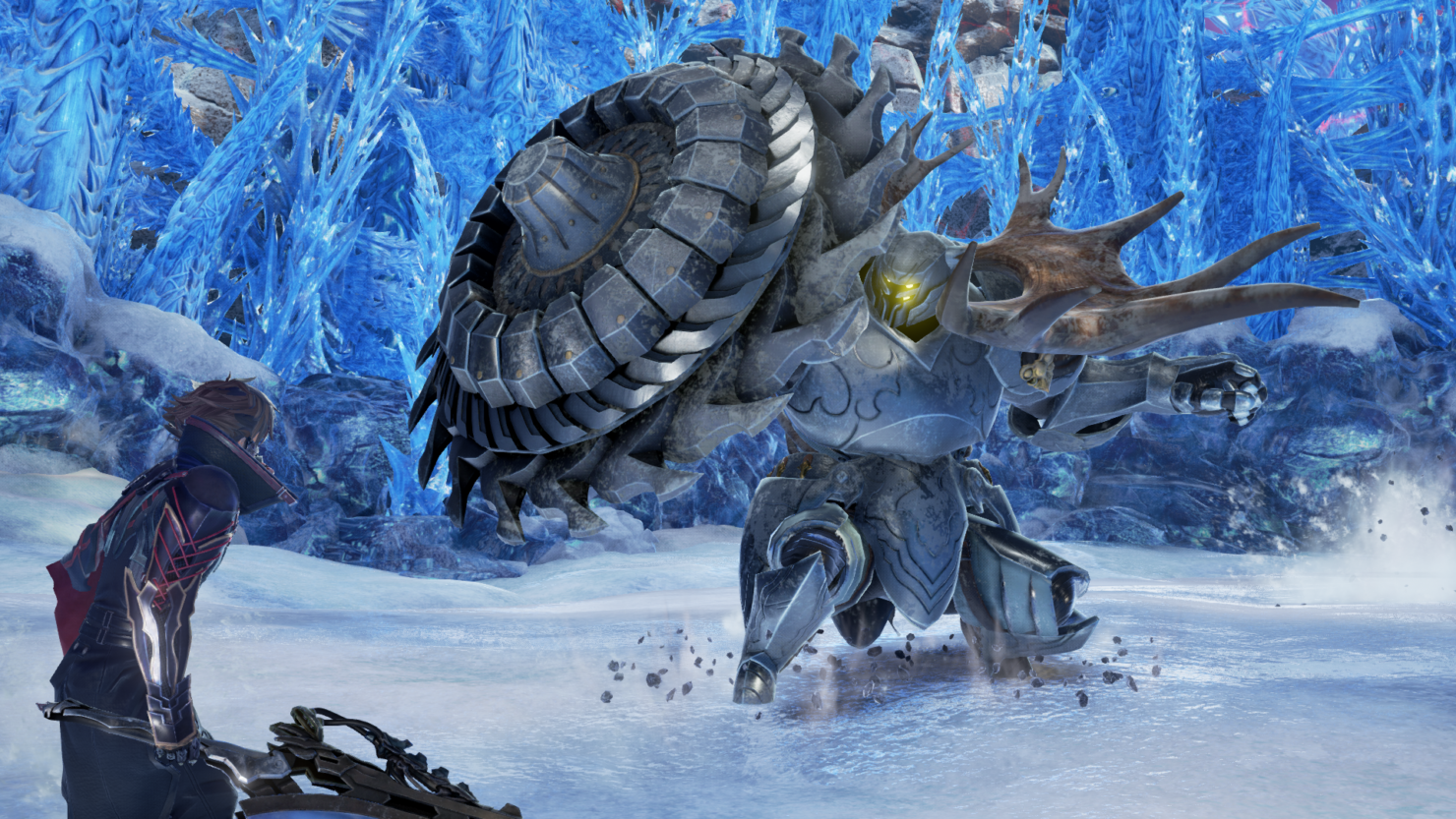 The Soulsborne genre, or its many interpretations, is still as prevalent in 2018 as it was in previous years. Fans have lived and died (and much more of the latter) in various medieval and futuristic settings that all hold their own interpretation of this action RPG genre. Even as From Software tries to step away from the formula they’ve perfected, other studios are starting to bring to market their own unique ideas on how to create a challenging RPG that that requires so much skill and experimentation to succeed. Code Vein may not be a brand new announcement from Bandai Namco, but E3 2018 marks the first time that I’ve gotten my hands on the project to see what the hype is about. 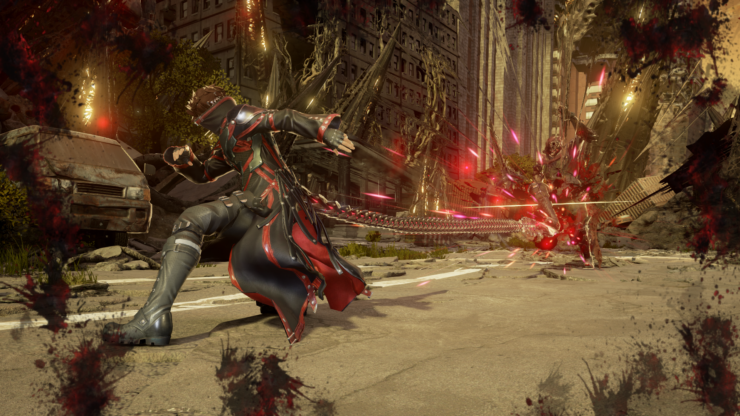 Code Vein is a new post-apocalyptic action RPG developed by Hiroshi Yoshimura’s team, most famously known for leading the God Eater projects. That weapon style and inspiration are both instantly recognizable in Code Vein with its anime aesthetic and elaborate, oversized weaponry. The 15-minute demo for Code Vein featured a decent selection of weapons and tools, from two-handed rifles to massive hammers and spears, in addition to different Blood Codes (Code Vein’s version of classes) each with their own Gifts, or special abilities. I tried to switch between the Fighter and Assassin types for my playthrough.

The world of Code Vein is instantly much brighter than that of a Dark Souls game but not much more colorful. Various hues of red and brown makeup much of the cliffside environment I played through with enemies and their darker tones standing out against the sunsetting backdrop. There was no shortage of blood spewing from the enemy fodder and is something I’m sure my main character hungers for with his left hand’s voracious appetite. 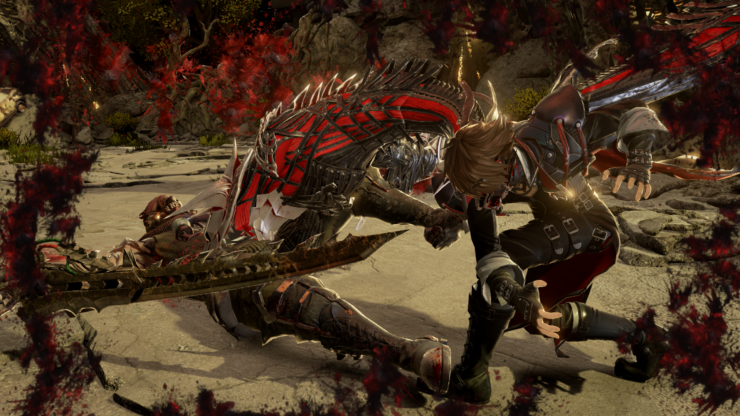 Code Vein’s combat should feel instantly recognizable if you have even an elementary understanding of a Souls title. Basic attacks are performed with the square and triangle buttons, while Guard and Parry each operate on L1 and L2, just as they would in Dark Souls. The R1 button modifies a number of attacks, whether it’s giving the basic attack on Square a special attack unique to the weapon type equipped or using the Triangle button to launch lighter enemies into the sky for a juggle combo that rivals that of Tekken. Without the handicap of a massive shield to take the majority of a brute force hit, you’re constantly going to be taking at least partial damage when blocking an attack in Code Vein. After all, holding a spear can only do so much to protect your torso against gunfire from afar.

The Gift system includes a various assortment of statistical buffs and elemental modifiers for your character that is unique to their currently assigned Blood Code and restored at Mistles, Code Vein’s interpretation of a Bonfire. At first glance, it’s a lot to take in and remember which little symbol does, but it’s all about the trial and error to figure out what each Gift does and how best to utilize them in each encounter. 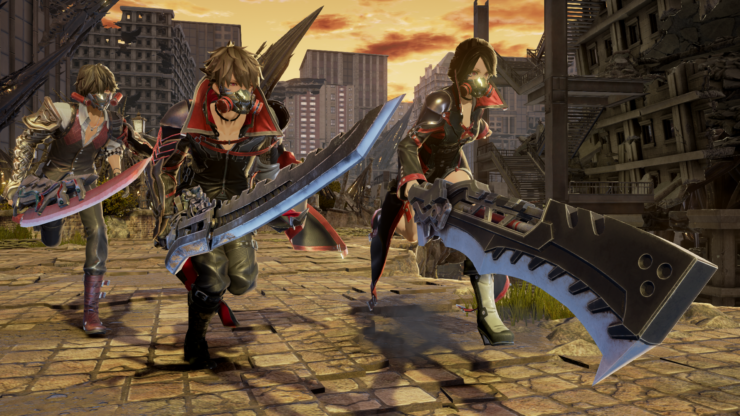 Wielding a massive weapon in Code Vein is a satisfying bit of empowerment, but these oversized weapons don’t always offer the impact that you might expect. In a similar comparison between God Eater and that of Monster Hunter, the weapons lack the heft that such a massive design should otherwise entail. Rather than a high staggering potential or knockback, many enemies bear the brunt of your blows and shrug off hits that would make any skeleton in Dark Souls choke. Likewise, the final boss at the end of my demo was a sincere health sponge and took too many blows to even come close to finishing off for my taste in a Soulsborne title (while the footage we recorded cuts off midway through, unfortunately, I still couldn’t bring myself to pull through and win the fight, so you’re spared another five or so minutes of fruitless flailing about).

In its current state, Code Vein does show promise for a new take on the Soulsborne genre, especially as From Software and other studios branch off to find other ways to tackle the adventure games. It can’t quite escape from the janky combat that God Eater is known for, However, if the studio can take this consideration to heart and tighten up the combat to be more reactive and perhaps double down on the anime aesthetic with not just the character models but the world (low-poly brown environments are so overdone), Code Vein could easily shape up to be one of the more stylish innovators to the Soulsborne genre.

The game is due to be released on September 28th for PC, PlayStation 4 and Xbox One. Check out the gameplay we've captured at E3 2018 below.