Next week is going to be a big one for CoD fans, as that’s when Call of Duty: Black Ops Cold War Season 1 kicks off and when the first major Cold-War-related updates come to Call of Duty: Warzone. So, what exactly can we expect from the big Warzone/Cold War updates? Well, the Twitter account Black Ops Cold War Leaks posted a mess of datamined info last evening, revealing new maps coming to Warzone and Cold War, and more. First up, it would seem Warzone is introducing a new island map, which definitely bears a resemblance to Alcatraz, the smaller 40-player battleground that was in CoD: Black Ops 4’s Blackout battle royale. You can check out the leaked image, below.

ALCATRAZ IS BACK BABY

If we are getting a new Alcatraz-like map, it’s likely gone through a bit of a Cold War rebranding – a Warzone roadmap released last month promised a "classified Warzone experience" and a partially redacted teaser image makes mention of an “...eniya Island.” Many suspect this is a reference to Vozrozhdeniya Island, a real-life location where the Soviets tested biological weapons (it was the location of a mission in the original Black Ops). 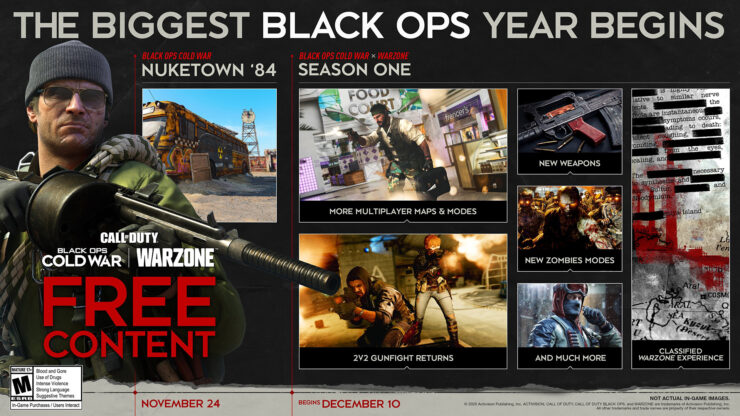 But that’s not all! The same Twitter account that leaked the Warzone info also revealed a ton of hints about CoD: Black Ops Cold War Season 1. Unfortunately, Activision quickly forced them to take most of the information down, but of course, the Internet never forgets. Most notably, an image featuring four new Cold War Season 1 maps (we won’t post it here to avoid Activision’s wrath, but you can check it out on Reddit) has leaked. We don’t have names or descriptions yet, but the first looks to be set in a TV station, the second in a subway station, the third in a missile silo, and the fourth may be a multiplayer take on the KGB headquarters from the campaign.

The leaks also revealed some skins, including a pretty stylish one for Adler, a Christmas-themed makeover for Nuketown, a new “Dropkick” mode (no details on how that will work exactly), and the usual array of cosmetic bundles.

Call of Duty: Black Ops Cold War Season 1 and the next big update for Call of Duty: Warzone kick off on December 10. Anyone playing the new game? Excited for the additional content?