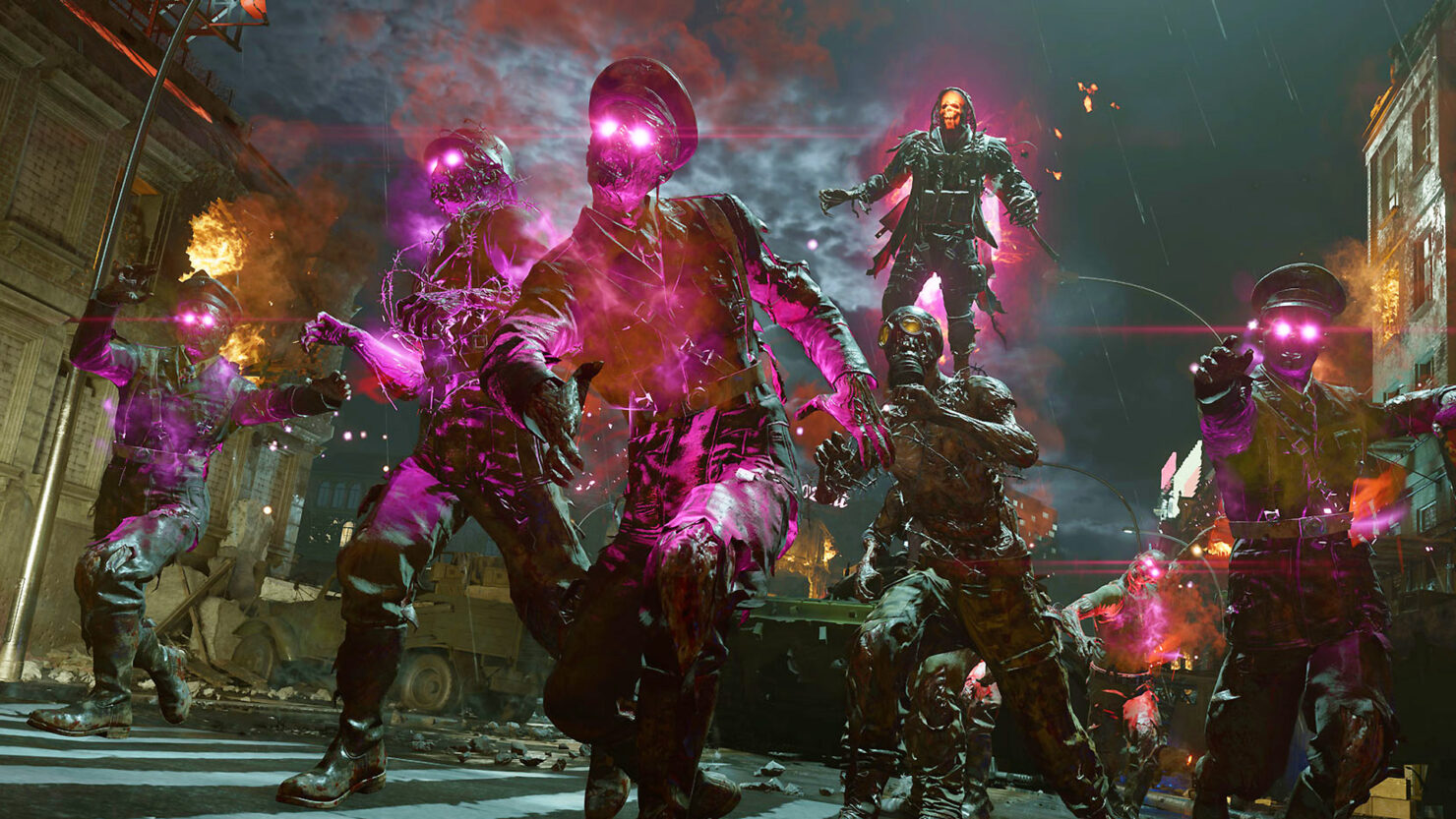 We’re around a month into Call of Duty: Black Ops Cold War/Warzone Season 4, and as usual, Activision is preparing to “Reload” the season with more content. The refresh will include the next major Zombies chapter, “Mauer Der Toten,” a new objective-based mode for Warzone, a map and modes for multiplayer (including the return of classic Capture the Flag), and more! You can check out a trailer for Mauer Der Toten, below.

Here’s everything you can expect from CoD: Black Ops Cold War/Warzone Season 4 Reloaded:

Kravchenko has you captive, and the only chance at survival for you – and your strike team’s pilot – is to follow his orders.

Set after the events of “Operation Excision” in Outbreak, “Mauer Der Toten” is Treyarch’s next classic round-based Zombies experience where Requiem agents, currently working for Omega Group’s Colonel Kravchenko in a bid for their freedom, will explore war-torn Berlin after a zombie invasion has overtaken the city. Agents will navigate through the dark streets, lit only by spotlights, street lamps, and long-abandoned vehicles. If they can find a way to activate a new robotic companion, Klaus, who will help them defeat the undead.

All of that, plus a new Wonder Weapon with four unique variants, fast-travel ziplines, terrifying new enemies, new quests to discover, and more secrets and surprises are coming in this massive new round-based map. Keep checking the Call of Duty Blog and Treyarch’s blog for more information as we break down this map and more Zombies tips up to the map’s Main Quest launch time of 10 AM PT on July 15.

The Return of Mule Kick

At the launch of Season Four Reloaded, the Mule Kick Perk-a-Cola will have its very own machine in “Mauer Der Toten” and also be stocked within Der Wunderfizz machines across the other round-based maps and Outbreak. Mule Kick allows Requiem agents to carry three weapons as opposed to the default two.

Get ready to create a new piece of Tactical Equipment at Crafting Tables in “Mauer Der Toten,” other round-based Zombies maps, and Outbreak regions: the LT53 Kazimir grenade. Upon placement, this grenade will open to suck in any undead creatures, neutralizing them when they reach event horizon.

As for the Wonder Weapon, the new CRBR-S starts off as an energy-based pistol with an orbiting repeater that fires an extra shot when you fire. To upgrade it into its three additional variants, you’ll need to recover special Mod Kits that drop from zombies that will attach onto the CRBR-S to transform it into a completely different weapon.

A new map means new Requiem Advancement Challenges. By completing challenges specific to “Mauer Der Toten,” you can earn several Calling Cards for your profile and tons of bonus XP. This includes unlocking the Pack-a-Punch, travelling to every area in a single game, collecting various sets of Intel, and more. Complete all six of the regular challenges to unlock an Animated Calling Card and even more bonus XP. Of course, Dark Ops challenge hunters will have a little something to discover with this update, too.

Agents will tackle zombie hordes on the classic map Rush, and can race into combat at a ridiculous pace with the “Onslaught Accelerated” mode. Then there is the LMG Weapon Blueprint, the “Chemtaminate,” which can be unlocked by surviving 20 accelerated Surge waves and used across all Zombies and Multiplayer modes in Black Ops Cold War. 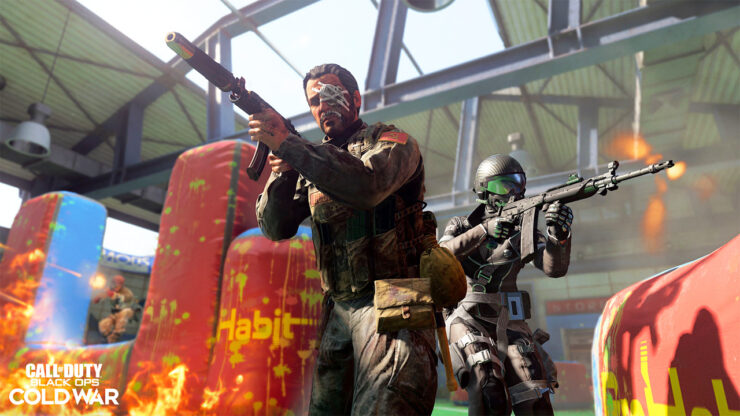 It’s paintball season. A remastered map from Call of Duty: Black Ops II’s Vengeance DLC pack, Rush is a small-sized 6v6 map that takes place in and around a paintball course. This chaotic arena offers multiple opportunities for up-close-and-personal combat, with narrow choke zones to scurry through and a scattering of exterior structures offering longer-range takedown possibilities.

Like Call of Duty, this game mode has plenty of history behind it. An objective mode whose roots stem from the very first Call of Duty Multiplayer experience, Capture the Flag (CTF) is a competitive mode where squads must take the enemy’s flag and return it to their home base, while also defending theirs from the enemy team.

Later in the season, Treyarch is expanding the paintball experience out of Rush and into the wider world of Black Ops Cold War Multiplayer in the new Paintball Moshpit. This new way to play MP will introduce paintball visual effects and impact sounds to the action across a selection of maps and modes.

Also coming at mid-season launch, Treyarch will be running a dedicated Rush 24/7 playlist to give everyone a chance to enjoy the latest map non-stop, in addition to an all-new collection of Cranked modes. If you’ve been loving Cranked Hardpoint and its original ‘80s Action Heroes incarnation, you’re going to love Cranked Moshpit, which adds Cranked Team Deathmatch and Cranked Kill Confirmed to the mix for the first time. 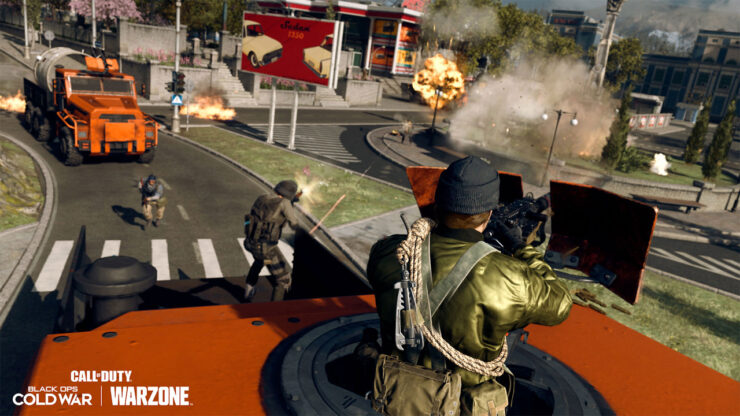 Now, as part of Season Four Reloaded, the massive free-to-play experience introduces its newest objective based mode: Payload. Inspired by previous traditional Call of Duty game modes like Call of Duty: WWII’s War Mode, Payload pits two teams of 20 players against each other in a race against time for crucial intel, as these vehicles carry satellite parts that could shift the balance of the war between Perseus and NATO.

If the attacking team escorts all vehicles across all Checkpoints within the time limit, they win the match. The defending team can not only pick attackers off the payload vehicles to slow them down, but also buy and build obstacles to stall these vehicles on the tracks. This all happens as Operators are dropping in constantly with their own custom loadouts, searching for items across Verdansk like Cash and Killstreaks to aid their team in escorting or stopping the Payloads. Look for Payload in the Featured Playlist Rotation as part of Season Four Reloaded.

Similar to Double XP weekends, Raven Software is planning to activate a new special global event where Contraband Contracts automatically spawn after you complete two regular Contracts. Contraband Contracts award you with a permanent Weapon Blueprint reward if you’re able to extract it from the DZ, in addition to tons of Cash within your current match.

Brave Operators across Verdansk have gone through the Red Doors, stepping out into parts unknown...

Further intel suggests that these Red Doors will appear [[REDACTED]] and take you to [[REDACTED]].

As Perseus sleeper cells are still at large in Verdansk, we caution you to [[REDACTED]].

Similar to how it operates in Black Ops Cold War and Modern Warfare, the Sentry Gun scans in a near-180-degree radius in front of itself to seek and destroy enemies. It executes this kill pattern for at least a minute after deployment before it collapses via harmless explosion. Find the Sentry Gun as an extremely rare Legendary item drop within a Red Door room Supply Box. 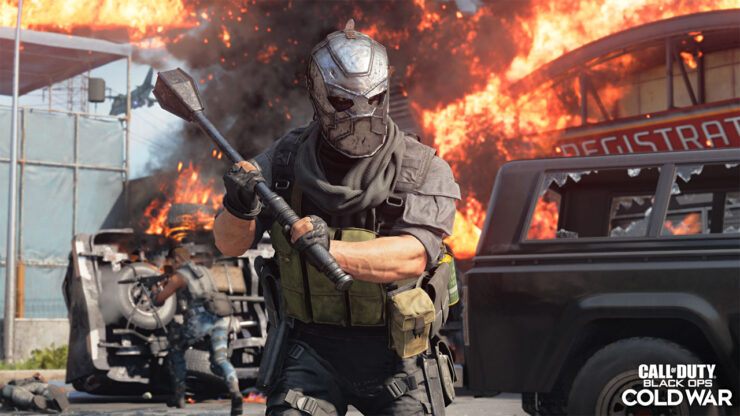 Full-auto submachine gun. Impressive firepower at close range with good visibility when firing. Reliable recoil control with smaller magazine size. The OTs 9 is primed to compete with the best SMGs across Black Ops Cold War and Warzone. It can either be unlocked via in-game challenge or have one of its Weapon Blueprints purchased via the Inside Job Store Bundle.

A weapon ill fit for the weak, the Mace can inflict critical damage on command. And in Zombies, this weapon is perfect for getting medieval on the undead’s decomposing cadavers. Obtain the Mace later this season either by in-game challenge, or by acquiring one of its Weapon Blueprints through the Mystic’s Scepter Store Bundle.

Weaver will venture beyond Requiem’s classified HQ and become a playable NATO Operator across Black Ops Cold War and Warzone as part of the Tracer Pack: Weaver Operator Bundle, available in the Store later in the season.

Raised in America after his mother fled the USSR with him in tow, CIA Clandestine Service Officer Grigori Weaver straddles both sides of the Cold War divide, losing an eye to Kravchenko during a covert mission to steal space-race secrets. Within this bundle is his “Kremlin’s Eye” Operator Skin based on his original Black Ops incarnation, in addition to three Legendary Weapon Blueprints and a new Finishing Move, where he fools the undead into ripping an enemy limb from limb!

Intrigued by the new content? Well, you can try it out for free, as CoD: Black Ops Cold War is having a free week from July 22 to July 29. Here’s the full calendar of all the Season 4 Reloaded content (click the image for full resolution). 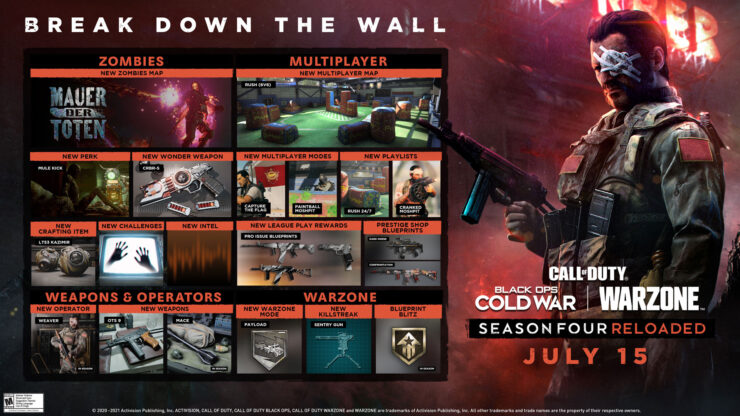 The CoD: Black Ops Cold War Season 4 Reloaded update weighs in at around 11 GB on Xbox One, 15 GB on PS4, 18 GB on PS5, and 21 GB on Xbox Series X/S and PC. The Warzone update is around 9 GB regardless of platform.