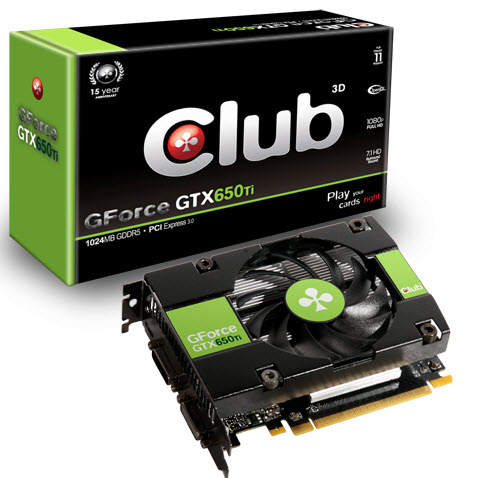 Featuring a non-reference design, the 80mm fan keeps the GPU temperature low at 31⁰C under idle and operate stable at 53⁰C under load (3DMARK 11 under Extreme preset settings). The aerofoil turboblades and dust repelling bearings designed to operate under extreme load conditions, provide a consistent 31.3dBA under load or idle. With the short 146mm PCB size, this graphic card is designed for smaller system chassis, making it ideal for users who do not want to replace their computer case and convenient for HTPC users and boosting up the performance by up to 35% compared to previous generation GeForce graphics card*.

The GeForce GTX 650Ti embodies the maturity of the 28nm NVIDIA Kepler architecture and offers support for the the PCI Express 3.0 bus interface allowing for the highest data transfer speeds. Experience a whole new world of detail and image quality with DirectX 11 with Shadermodel 5.0 support, NVIDIA Adaptive Vertical Sync, a smarter way to render frames eliminating tearing at low frame rates, and smooth out jagged edges with TXAA & FXAA anti-aliasing, getting rid of distractions so you can get on with gaming. All these features backed by NVIDA Kepler GPU architecture, designed from the ground up not just for maximum performance, but also for optimal performance per Watt. The result is world class performance and the highest image quality in an elegant and power efficient graphic card.

NVIDIA's Kepler GPU architecture has been designed from the ground up not just for maximum performance in the latest DirectX 11 games, but optimal performance per watt. The new SMX streaming multiprocessor is twice as efficient as the prior generation and the new geometry engine draws triangles twice as fast. The result is world class performance and the highest image quality in an elegant and power efficient graphics card.

Compared to the original Fermi-SM, SMX has twice the performance per Watt. Put another way, given a Watt of power, Kepler's SMX can do twice the amount of work as Fermi's SM. And this is measured apples-to-apples, on the same manufacturing process. Imagine a conventional 50 Watt light bulb that shines as brightly as a 100 Watt light bulb—that's what Kepler's like when gaming.

Nothing is more distracting than framerate stuttering and screen tearing. The first tends to occur when framerates are low, the second when framerates are high. Adaptive V-Sync is a smarter way to render frames. At high framerates, V-sync is enabled to eliminate tearing, at low frame rates, it's disabled to minimize stuttering. It gets rid of distractions so you can get on with gaming.

Anti-aliasing smoothes out jagged edges but can be demanding on framerates. FXAA is a new anti-aliasing technology that produces beautiful smooth lines with minimal performance impact. And with Kepler based GPUs, you'll be able to enable FXAA in hundreds of game titles through the NVIDIA Control Panel.

The second mode, TXAA, is an in-game option that combines MSAA, temporal filtering, and post processing for even higher visual fidelity.

3D Vision brings a fully immersive, stereoscopic 3D experience to the PC. A combination of high-tech wireless glasses and advanced software, 3D Vision transforms hundreds of PC games into full stereoscopic 3D. Get up to 2x monitor and keyboard brightness with NVIDIA 3D LightBoost technology4. In addition, you can enjoy 3D movies and 3D digital photographs from 3DVisionLive.com in eye popping, crystal-clear quality.

NVIDIA SURROUND WITH UP TO THREE MONITORS

Nothing is as breathtaking as playing your favorite games across three monitors. At 5760 x 1080, the expanded field of view fully engages human peripheral vision and provides for the most immersive experience in racing and flight simulators.

Dust can collect inside unused video outputs and Electro-Static-Discharge (ESD) by touching the PCB with bare hands while not grounding yourself can be harmful to a graphic card. To protect against dust and ESD Club 3D provides protective caps on the video outputs, SLI connector(s) and PCB goldfinger of the graphic card and can prolong the lifespan of your graphic card by up to 65%. 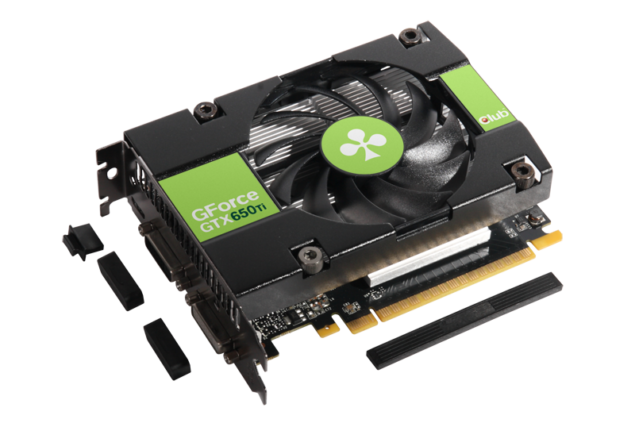