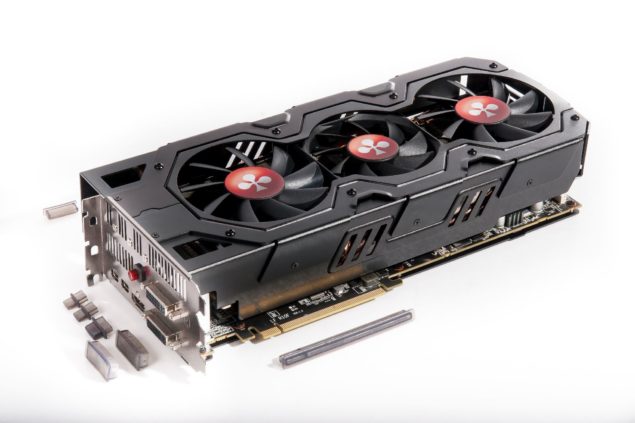 Over at its official facebook page, Club3D has posted a picture of its upcoming Radeon HD 7990 which features Dual Tahiti XT Cores and packs a three slot monster cooler.

The card would bear the Club3D brand but its actually a same copy of PowerColor's recently launched HD 7990. The only difference is that the Club3D's HD 7990 has stickers of the brand logo on top of the three fans. We have also spotted that the Club3D's Radeon HD 7990 comes with a custom backplate which wasn't available on the Powercolor's variant.

In addition to that, other specifications of the GPU would most likely remain the same such as Dual Tahiti XT core running at the default 900 MHz core clock and an OC boost through the BIOS switch located at the I/O panel. Card would include a 6GB on board memory running across a 384-bit x2 memory lane. Memory would be clocked at 5.5 GHz effective frequency.

The cooling design remains the same, backplate is a good addition though. The Tri-slot cooler comes with three fans cooling a large aluminum heatsink array fitted with multiple heatpipes underneath it. The PCB has a 12+2+2 phase VRM and is powered through three 8-Pin PCI-e connectors.

Pricing and availability are yet unknown but we expect the price to be around $799+ range making it fall under the enthusiast/hardcore gamers league.