1usmus has just announced the early access release of the latest CTR 2.0 (Clock Tuner For Ryzen) utility which now adds support for AMD's Ryzen 5000 CPUs based on the Zen 3 architecture. CTR 2.0 is a very handy and powerful tool as demonstrated by Yuri on the Zen 2 platform & now, it has finally been brought over to the Zen 3 platform with a range of new features, enhancements, and bug fixes.

The Clock Tuner For Ryzen has finally left its v1.* variation and entered the V2.0 release with CTR 2.0. This major update finally adds support for AMD Ryzen 5000 CPUs based on the Zen 3 uArch. According to the release log, the update brings the following highlighted features: 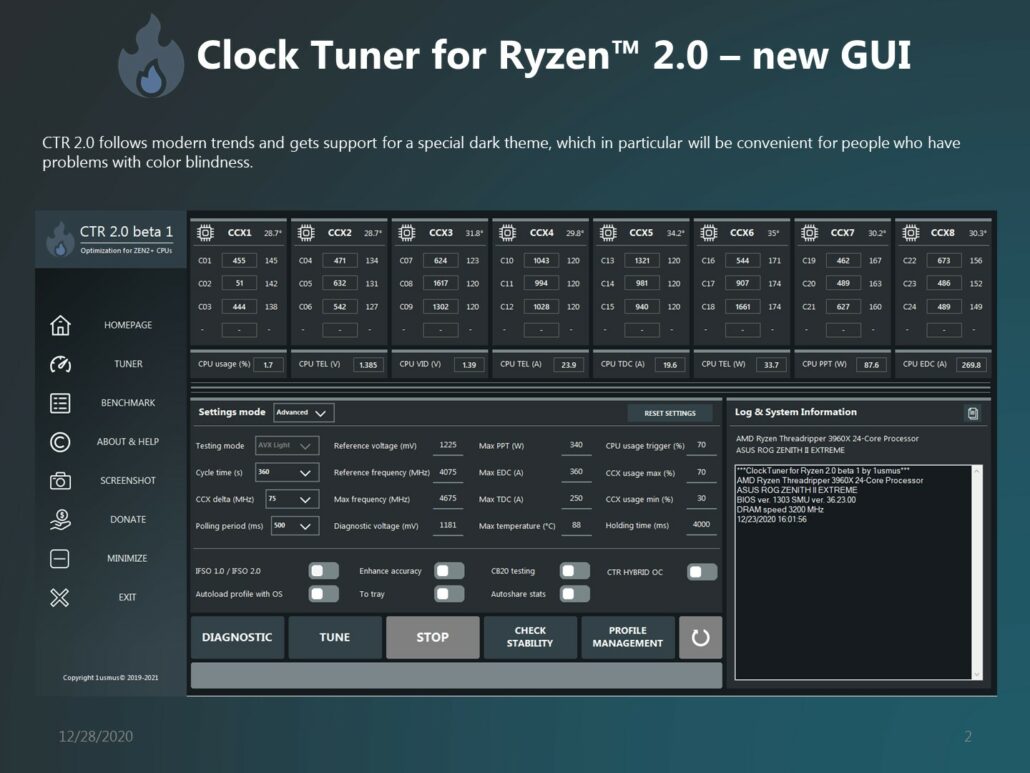 Starting with the changes, the CTR 2.0 update brings a new graphical user interface that offers dark mode support and blends in with a more modern UI. The whole interface is now more streamlined and looks cleaner than the previous versions. However, the main feature to talk about aside from the addition of AMD Ryzen 5000 Zen 3 CPU support is the new Hybrid OC feature. 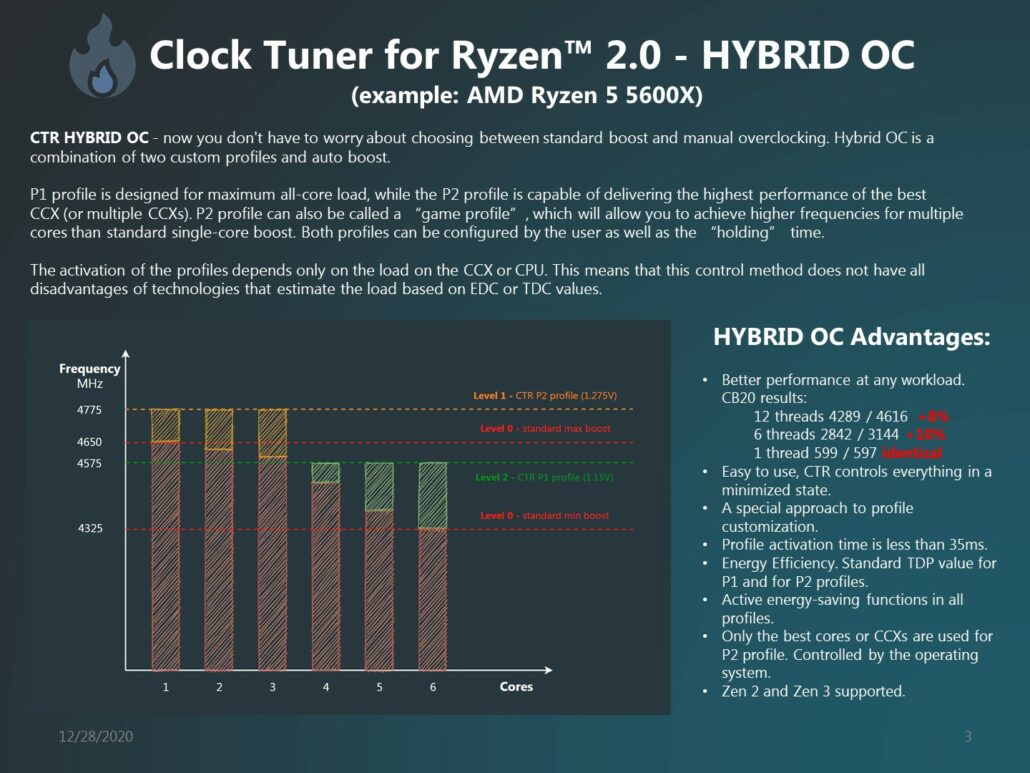 According to the data shared by Yuri, the Hybrid OC mode is a combination of custom profiles and auto boost which means that users won't have to worry about choosing between standard boost & manual overclocking. Hybrid OC mode has two main profiles, P1 and P2. The P1 profile is designed to offer the maximum all-core boost while the P2 profile maximizes gaming performance by tuning the CPU to offer the maximum performance for a singular and best CCX (or multiple CCX). Both of these profiles can also be configured manually by users themselves.

In performance benchmarks shared by Yuri, Hybrid OC manages to offer up to 10% better multi-threaded performance and identical single-core performance which means there's no loss in the overall single-core perf when tuning multiple CCX's. The profiles also don't break past the TDPs set by AMD as default and hence this feature actually helps improving energy efficiency for AMD Ryzen 5000 Zen 3 and also Ryzen 3000 Zen 2 CPUs.

In another benchmark with the AMD Ryzen 9 5900X, 1usmus demonstrates a 7.5% gain in content creation performance within Cinbench R20 with the same levels of power consumption. The under-volting feature is also supported and the chips can offer the same amount of performance with a massive 28% reduction in power consumption. Finally, we have the new Curve Optimization feature that was demonstrated using the Ryzen 9 5900X CPU too. This feature is kept for manual tuning for now but auto-tuning will be added within the CTR 2.1 release.

Other features for the CTR 2.0 (Clock Tuner For AMD Ryzen CPUs) include: 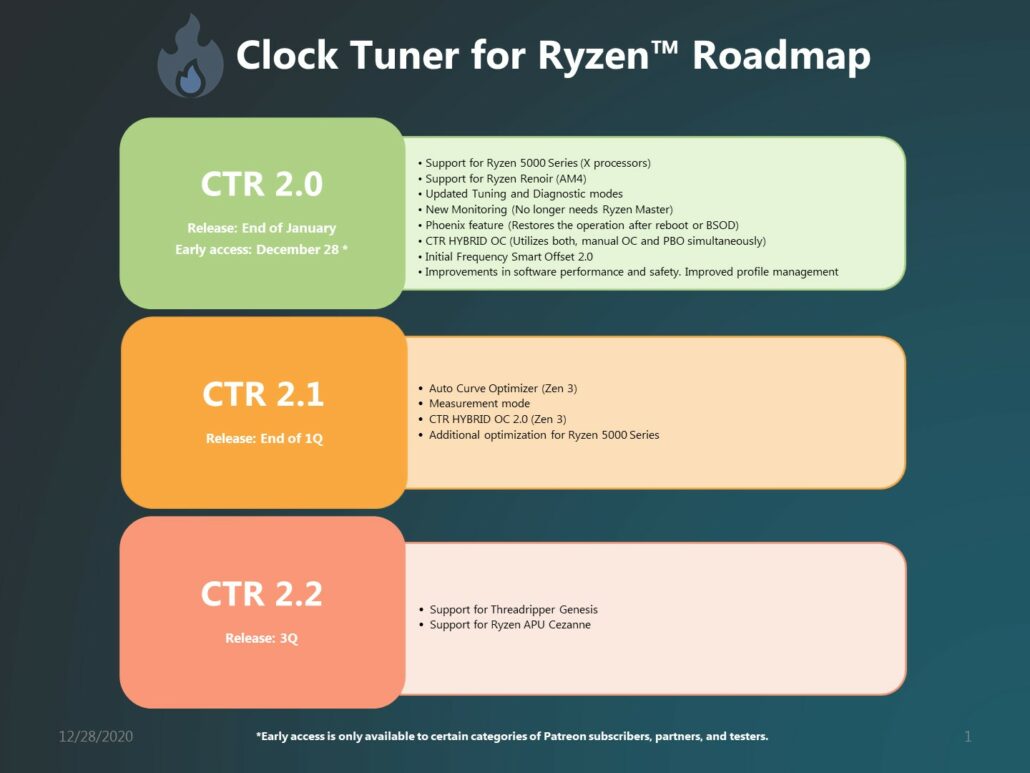 1usmus has also released a roadmap for his CTR utility for 2021. The first official release would be for CTR 2.0 which is currently going to launch as an early release version with proper availability by the end of January. Also in the first quarter of 2021, the utility will see the v2.1 release which will add Auto Curve Optimizer & CTR Hybrid OC 2.0 modes for AMD Ryzen 5000 Zen 3 CPUs along with a new measurement mode and additional optimizations for Zen 3 based chips. In Q3 2021, CTR 2.2 will be released with support for AMD Ryzen Threadripper 'Genesis' CPUs and will also add support for Ryzen 5000G 'Cezanne' APUs.