We've been gaining a good stream of information when it comes to Civilization VI for a while now. Most recently, at the start of Gamescom, it was announced that Germany and their leader, Frederick Barbarossa, is the next on the list of factions you can play in the game.

Of course, eager for more information, I spoke with Firaxis Games' Associate Producer Sarah Darney and Project Art Director Brian Busatti at Gamescom to find out more about Civilization VI.

Chris: You've recently announced the Germans. With Germany having an extra city slot and a focus on balance, has everything been designed for balance?

Chris: Having announced Germany. You've brought back Montezuma. Have you brought any new leaders to the series or is that to be announced a little later?

Brian Busatti: We still have a few we haven't announced yet. We also wanted to bring back some leaders that haven't been around for a while and we wanted to create some leaders that haven't been around at all. Especially important is the way they tie into our game system. We pick big personalities but when people play the game, they'll understand.

Chris: You can certainly understand Bismark. Particularly as it mentioned in the presentation about the expansion of the City States. How have you expanded on them?

Sarah: The city states are so cool. I never personally played around with them too much in Civilization V but we have this envoy system which is through the civics tree and is brand new. Through your government system, your social policies and your civics tree in general, you can earn envoys which helps you earn favor with the city states and that gives you specific bonuses.

All of the city states have their own personality. There are six different types and their bonuses reflect their personality. If you become the suzerain which is a minimum of three envoys but the maximum of anyone on the map, you are their best friend and you get major unique bonuses.

Sarah: So in Civilization IV to V we unstacked units. This was kinda the next step and we wanted to play with it and see how it played. It turns out amazingly. It's created so much importance for the map. With that changing every time you create a new game, it's so dynamic and so different every time. It's become its own character.

Chris: Oh, certainly. But now the wonders are taking up a city slot, how will it work with them and possibly limiting the total number of wonders?

Sarah: It's going to be challenging, definitely. Because every tile in your city is so important, you have to balance your wonders with the districts and the improvements. You can still collect a lot, if that's something you're into, Qin Shi Huang loves building wonders. You really have to play around with it, see what works with your play style.

Chris: One of the first things I noticed when playing was the hand-drawn art style featured with the fog of war and changes to it. It's new to Civilization and I love it, what made you choose that?

Brian Busatti: Thank you. When we first started the project and talking about themes, the theme for Civ V was Art Deco. I love art deco, but we wanted to do something a little different. We started throwing around ideas, and exploration is a big part of Civ, so we started thinking about the age of exploration as part of our theme. So our UI and even the game itself started to gravitate towards old parchment maps, nautical instruments, compasses. You can see various aspects of that in the UI and obviously in the fog of war.

It also let us be more creative in how the fog of war works. Civ V had the cloud, but it was kinda flat. You can't expose too much of the surrounding hexes because of your perspective so you give away some of that. So doing this it allowed us to do something different first of all and be very exact where we hide fog of war. It's one of the things I thought would be challenging. 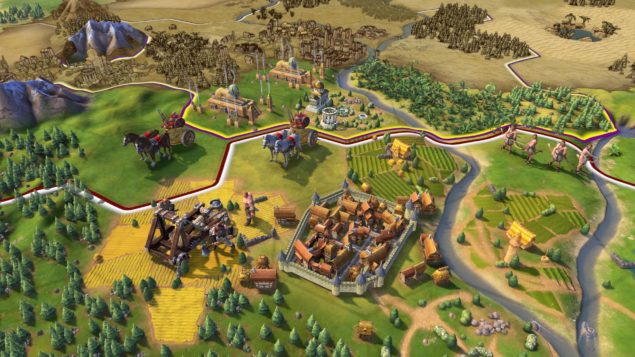 Chris: Have you also expanded on the unique units system?

Brian: We still have the unique units again with every leader. We've also expanded on that a little bit. With your standard units, like your Swordsman, they have a more cultural diversity look now. We have different skin tones and we also have slightly different looks to units across the board, especially early units. If you look at a Swordsman. An Egyptian swordsman will have an Egyptian headdress with a sickle sword, as opposed to a German one which will have a traditional sword.

Chris: Have you expanded that varied art direction across the rest of the game?

Sarah: You can see it in the cities as well. There are regional city sets and you can see that throughout the ages. It makes everything feel alive and unique.

Chris: There is something I did notice about the units and that is with the trader. You move it to another city and it creates the road as it's going!

Sarah: Yeah. Builders actually don't create roads. We do have military engineers which do. But I think historically most roads came from trade routes, just the way people walked. We really took from that and applied it to this mechanic.

Chris: Of course, there's irrigation, mining and such as that. What other uses will builders have? I've also noticed that they don't have an auto-function...

Sarah: Right. Every hex is so important. You've only got so much space so you want it to be right and have the right decision

Brian: The builder has charges now as well.

Brian: That's the base yes. That'll change depending on your leader, social policies and other factors.

Chris: So that gives the builder less influence. You've just mentioned military engineers, what will they be focused on?

Sarah: The military engineers build the ports as well as the roads.

Brian: We learned from Civ V that late in the game builders don't really have as much use. A lot of people automate them and surprise, you've got roads everywhere and a trading post in every desert tile across the board. So the one advantage to the charges is that it build instantaneous. You don't have to wait for it, so we've still balanced it to keep the builders useful.

Sarah: We've talked a little about combined arms. You can combine two of the same military type into a corp. Also, your military units can escort your civilian units which is very cool.

Brian: We also have support units. We have such as anti-tank that can go with your normal units

Chris: Have you also made any changes to the terrain in the respect of making areas impassable.

Brian: One of the big changes to the terrain is that we now have cliffs on the edges of the land. That keeps you from embarking on certain parts of the land.

Sarah: The map is its own character in Civilization VI. Every tile, every type of terrain and feature. They're all so important with the district system and active research. It all really fits together.

Chris: You've made a number of changes to your social policies and research, can you expand on this?

Chris: On a more technical note. Civ is a PC oriented game. Will you be supporting 4K and Ultrawide monitors?

Sarah: I'm not sure

Brian: We could probably find out that information. We're supporting a lot of resolutions. I also have an odd sized monitor and it runs on there.

Chris: Of course you've supported the previous Civ games with patches and DLC, have you got any plans with Civ VI?