One of the interesting things about Civilization is the roster of historical leaders. Each and every game has always featured a number of new and returning characters and nations. Each of these have their own personalities, bonuses and drawbacks that draw on their history and how they really were.

It's only fitting that Frederick Barbarossa, leader of the Holy Roman Empire, is announced at Gamescom here in Cologne. Made king of Germany in 1152, Barbarossa is likely the most famous of Germany's historical leaders. He brought the German states under the rule of the king once again. He invested in infrastructure and the cities, repairing decades of damage by constant turmoil. His ambitions led to frequent clashes with the city states of northern Italy as well as him participating in a number of the holy crusades. He also had sound political and legal acumen and was constantly able to undermine the church and its thoughts on divine revelation.

Working in line with the common theme of leaders following their historical actions and personalities. Barbarossa as a leader offers units a bonus in combat against city state units, as well as offering a free military policy slot on top of any slots offered by the government of your choice. This makes him a formidable leader for any aggressive minded player. 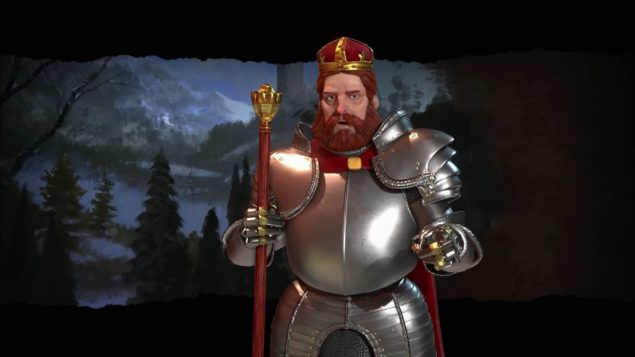 Following on with Civilization's common theme of each nation having their own unique units and benefits, Germany naturally has some very apt features. The Germans have an imperial city bonus, giving them an extra district than they would normally be allowed. The Hanza is a unique district, replacing the industrial zone, which provides bonus production when next to a commercial hub, additional districts or resources. Fitting as Germany is known as one of the most productive countries in the world.

It would be remiss not to mention the German unique unit, the U-Boat. The most fearsome submarines in the world and scourge of the Triple Entente in both World War One and the Allies in World War Two. The German U-Boats have a low production cost and have increased strength when fighting in deeper waters. A perfect addition to anybody's maritime ambitions.