It is hardly a secret these days that AMC Entertainment (NYSE:AMC) shares have been struggling along with the broader market, recently plunging to fresh year-to-date lows.

To wit, AMC shares are currently trading at $10.02. For reference, the stock had hit an all-time high of around $60 back in June 2021 during the heydays of the meme stock mania.

As a refresher, AMC recently announced strong earnings for Q1 2022, managing to exceed expectations on the top-line and the bottom-line metric. To wit, the company reported $785.7 million in revenue, exceeding consensus expectations by over 5 percent. Similarly, AMC reported an adjusted EBITDA of -$61.7 million, corresponding to a year-over-year improvement of $233 million.

Crucially, AMC now expects to record sequential improvements in its cash burn, culminating in a positive operating cash flow in the fourth quarter of 2022.

However, during the earnings call, AMC's Adam Aron had issued a veiled threat to "pounce" on short-sellers at an opportune time:

"We are constantly exploring the smartest courses of action, and I promise you that we will pounce, but only when the timing is right."

Bear in mind that AMC bulls regularly criticize the role that Citadel supposedly played in ending the meme stock mania back in early 2021. The beef between the hedge fund giant and GameStop and AMC bulls pivots around three factors, including the allegation that Citadel pressured Robinhood to limit buying activity in meme stocks, that it manipulated stock prices via fail-to-delivers (FTDs) and naked shorting, and that Citadel bailed out Melvin Capital when its outsized short position in GameStop blew up. For its part, Citadel has repeatedly denied pressuring Robinhood to restrict trading in meme stocks.

This brings us to the crux of the matter. In a tweet that has now been deleted, Citadel appeared to be trolling Adam Aron and meme stock bulls: 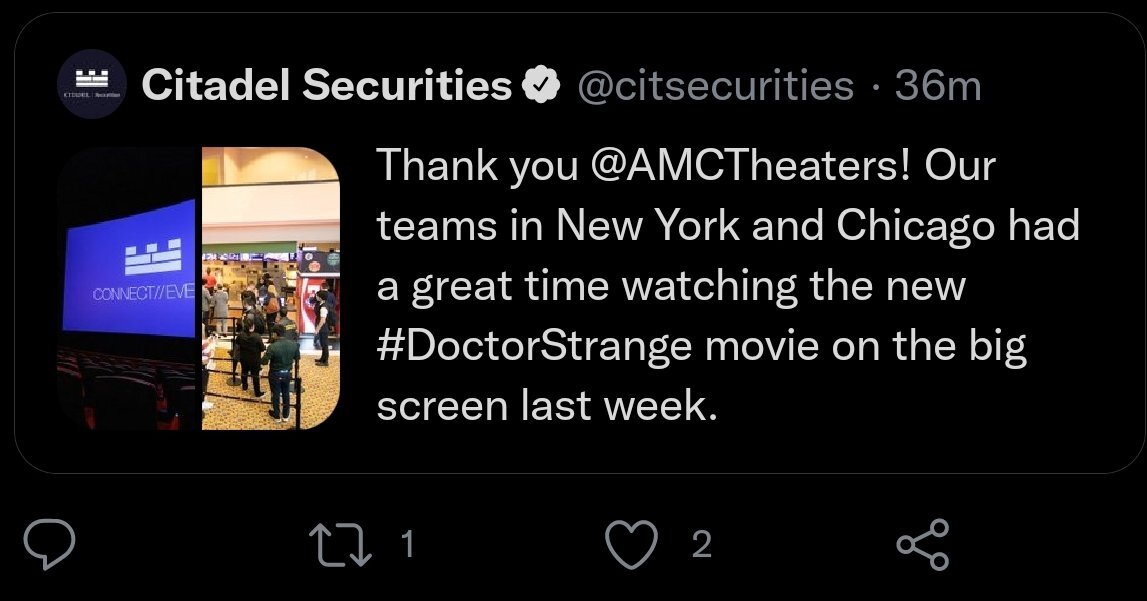 The tongue-in-cheek connotations around this tweet are quite evident, with Citadel apparently relishing the recent carnage in AMC's share price.

Do you think Citadel's latest antics will escalate the beef that already exists between meme stock bulls and Wall Street powerhouses? Let us know your thoughts in the comments section below.

AMC shares have suddenly jumped over 15 percent, while GameStop shares are now up over 30 percent. Is this the much-promised short squeeze?