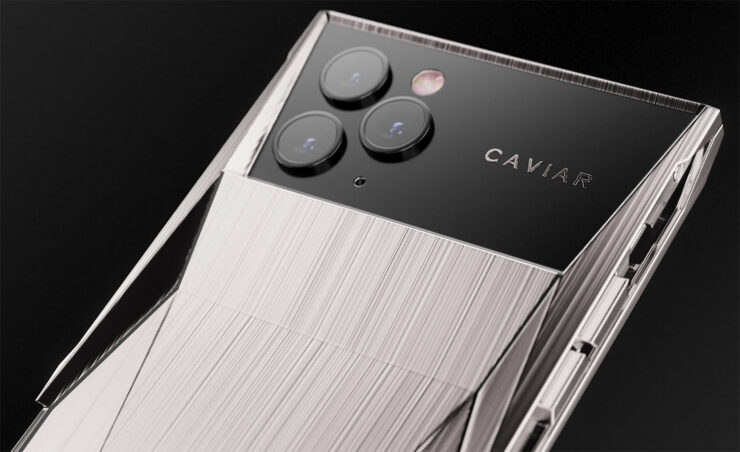 Tesla’s Cybertruck takes an unorthodox design thanks to its angular shapes and corners, and it looks like Caviar, a luxury accessory maker has taken inspiration from it. Caviar is known for churning out the wackiest of designs for the latest iPhones, and the latest one might just take the cake. Called the Cyberphone, it makes both the iPhone 11 Pro and the iPhone 11 Pro Max look like hand-held versions of Cybertruck.

Employing the use of a Titanium chassis, the iPhone 11 Pro and iPhone 11 Pro Max are heavily modded here, and there’s even a foldable front cover to protect the displays. However, Caviar could have used another way to protect that screen and it’s obvious by the company’s statement below that the entire design was inspired by the Cybertruck.

“The design of the smartphone is based on the concept of a new headline-making crossover model by Elon Musk. Caviar created a modified iPhone 11 Pro in the Tesla Cybertruck style: in the device, one can trace the deliberate geometry of lines, simplicity of forms and versatility of materials.

The titanium body of the smartphone is protected all round from any outer mechanical impact: the back cover, sides and even the screen are hidden under metal plates. At that, the total protection of the body does not violate, but even enhances the smartphone’s functionality: now, if you wish to use your favorite apps with comfort or have video calls, the folding titanium screen protection is transformed into a comfortable holder."

Sadly, there’s no word on the pricing at the moment, as Caviar states that customers can simply ‘contact us for a price’. This can imply that there will be a limited number of units being produced and if that’s the case, they aren’t going to be cheap. Caviar isn't known for producing the most affordable of modded iPhones, and it looks like the Cyberphone-modded variants of the iPhone 11 Pro and iPhone 11 Pro Max aren’t going to be different either.

What is your estimation on the pricing of these modded iPhones? Let us know down in the comments.