[Benchmarked] Can The Witcher 3 Be Played Well On The Alienware Alpha?

The Witcher 3: Wild Hunt has the potential to look absolutely phenomenal on the most high/end of hardware. REDengine 3 is a very advanced graphics engine indeed, with a plethora of options to suit your performance needs. We're also quite aware, as are you, that it has the ability to scale quite well. The PS4 and Xbox One cannot possibly play with the same visual fidelity as even a relatively low end PC. But to what end? How well can The Witcher 3 scale on the PC and just what kind of performance can we expect? How doth the Alienware Alpha base configuration handle this beast? 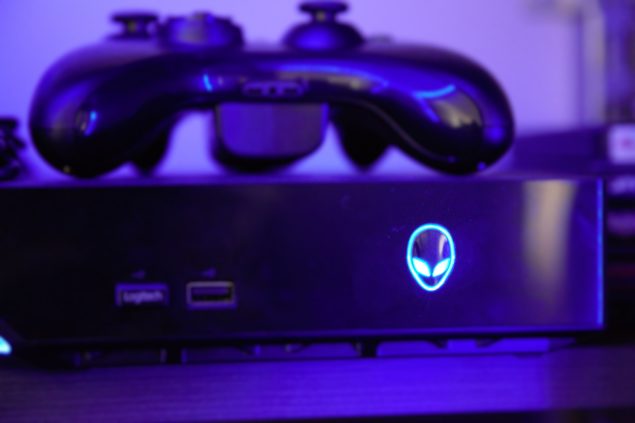 Will the Alienware Alpha be good enough to keep up with these magnificent visuals?

Perfect playability is about finding the perfect selection of settings that strike a balance in frame rate and visual fidelity. Sometimes the hardware might not be up to the task of providing both high frame rate at a desired resolution with all the graphical goodies turned on. Finding the perfect equilibrium is also not necessarily a cut and dry task. You might prefer higher levels of HBAO compared to me, or maybe you really see a difference in using MSAA, so then other settings might need to be manipulated to find that balance again. Thankfully The Witcher 3 has a plethora of options for us to experiment with.

Mostly, however, the good PC games have preset graphical levels that give us a decent balance between good-looking and speedy that tend to agree with what most people enjoy. The Witcher 3 is just one of those, so  we’re going to show just how potent, or not potent, the Alienware Alpha is when trying to render the beautiful and complex scenes in The Witcher 3: Wild Hunt.

The Alienware Alpha is Alienware’s answer to the Steam Machine before the actual release coming this November. Alienware was able to squeeze a T-rated Haswell up to an i7-4765T into a small 55mm x 200mm x 200mm package. Within you’ll also what a non-MXM and non-replaceable custom GeForce GTX solution that essentially equates to an 860M with 640 Maxwell shading units and 128 ALU’s clocked at 1029MHz and 2GB of dedicated GDDR5.

Let’s begin from the lowest preset and move our way up, showing the best case scenario and then showing you what the Alpha most certainly isn’t capable of. There are limits to what an 860M can do, no matter what CPU it’s attached to, so one should be realistic when looking at these numbers. And as a forward, it plays surprisingly well within the confines of the domain that it seeks to occupy.

All of the below benchmarks were run at 1080P this diminutive console isn't quite made for anything higher. The performance was gathered from walking through the first village, running around in a pre-defined pattern. The Witcher 3 was updated to the latest update as of July 12th 2015.

Well, it doesn't quite reach the sought after 60FPS mark, though what it does provide is a an experience that never dips below the cinematic 30FPS target though. Being that we're speaking about playability, this stable framerate speaks to a very smooth experience, one that's definitely faster than the console versions, and perhaps even better looking. So this is interesting. Turning the options up to the Medium preset results in a very small dip in performance. Keep in mind that NVIDIA Hairworks is now turned on for Geralt himself, so that should have an appreciable effect on performance (as it always does). But no, we see a small dip for a reasonable increase in fidelity. But is it truly large enough to look that much better? You decide. Now that HBAO and MSAA are being turned on, we're starting to see the limitations of 2GB of VRAM as well as the small amount of shading units. It just can't handle the requests being thrown at it properly, and performance suffers as a result. Strangely, though, the performance is relatively stable, as evidenced by the average framerate being very close to the maximum. It plays "smooth", for whatever that's worth. It's a bit slow and chopping when turning towards more complex scenes, such as the village itself, but overall it plays at about the same level as you'd expect the PS4 to play, though just a bit better looking. Now we're moving into the not so good performance territory, again due to the inherent limitations of only having 640 shader units on tap. There's just only so much that they can do. Though the 860M is still working very hard to provide a "stable" framerate.  There is still only a small difference between the minimum and maximum FPS. As a point of comparison, or more appropriately a point of conjecture, the consoles likely wouldn't be capable of such performance with all these nice looking shines turned on. We only really need 640Kb of RAM, right? Well, that might not be enough to even load Geralt's gorgeous flowing locks. But is 2GB holding back the Alienware Alpha in any way?

On high settings we can already see memory usage creeping into almost 100% of the available VRAM. It's looking like if anything else is turned on that it'll begin the process of swapping between the slow mechanical HDD, which won't be a pretty sight and could potentially cause stuttering not related to the GPU's ability to process mathematics.

Ultra settings reach that limit rather quickly, coming very close to using the entire 2GB of RAM, though stopping curiously short. This could be due to the scene itself used for the playthrough, however, and there might be even worse case scenarios. Regardless, it doesn't quite start swapping to the HDD at even Ultra settings.

The Alienware Alpha is a capable little machine, and while it doesn't exactly provide record-breaking performance in The Witcher 3: Wild Hunt, it does give you a better than console experience in both framerate and in visual fidelity. It's never a slideshow, even at Ultra, and is perfectly playable, though a bit slower. Even though it's slower it's stable enough to be "smooth".

Playability does mean different things to different people, so if all the metrics are agreeable to you, then it might work. The fact that it can even display Ultra settings without a choppy experience is nothing short of great. But of course just be forewarned that the Alienware Alpha isn't for everyone, and it's not marketed towards everyone. Hardcore PC enthusiasts will scoff at these numbers, which is understandable, because this isn't for you. But for those seeking a miniature turn-key solution that provides an easy transition from being primarily a console gamer, than this is it. At least, this is a good option. The size is something that you'll have trouble doing on your own without some kind of custom work done.

The Alienware Alpha can play one of the most breathtaking games out there, not tremendously well, but it can do it and it can still be fun to play.