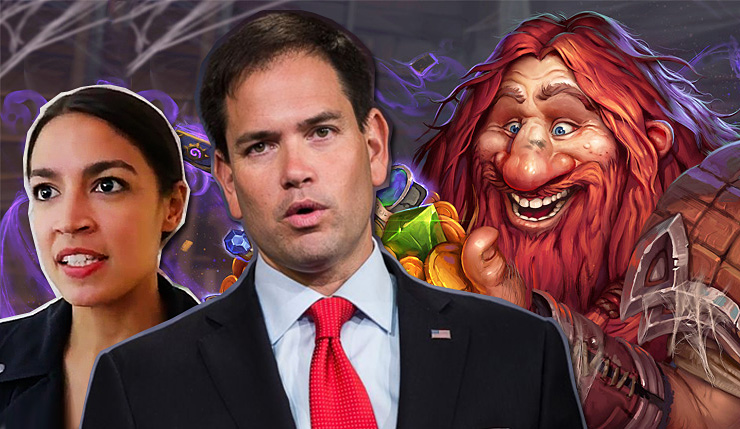 Last week during a post-game interview at the Asia Pacific Hearthstone Grandmasters tournament, Ng “Blitzchung” Wai Chung spoke up in support of the pro-democracy protests in Hong Kong, which resulted in Blizzard banning Ng Wai Chung from Hearthstone competitions for one year and forcing him to forfeit his winnings from the tournament. Blizzard would later partially walk back their punishment, reducing Blitzchung’s suspension from a year to six months and letting him keep his prize money. Three more Hearthstone players who held up a pro-Hong-Kong sign in support of Blitzchung have also been banned.

Needless to say, Blizzard has been facing intense backlash from fans for these actions, but US lawmakers are taking notice as well. United States Congressmen Marco Rubio and Ron Wyden have released a bipartisan letter condemning Blizzard’s decisions. The letter is co-signed by Congress members Alexandria Ocasio-Cortez, Mike Gallagher, and Tom Malinowski. The letter was either written a while ago, or Congress hasn’t been keeping up with the story, as it doesn’t address the fact that Blizzard has lessened Blitzchung’s punishment, but it still sends a pretty clear message to the company. You can read the full letter, below.

We write to express our deep concern about Activison Blizzard's decision to make player Ng Wai Chung forfeit prize money and ban him from participating in tournaments for a year after he voiced support for pro-democracy protests in Hong Kong. This decision is particularly concerning in light of the Chinese government's growing appetite for pressuring American businesses to help stifle free speech.

Activision Blizzard benefits from China's growing market for esports, along with an investment from Tencent, one of China's largest technology firms. As you and your company are no doubt aware, the Chinese government uses the size and strength of its economy to suppress opinions with which it disagrees. Last week alone, the Chinese government targeted Apple for hosting an app to help peaceful demonstrators evade repression and the National Basketball Association because one team's general manager tweeted in support of Hong Kong protests.

Your company claims to stand by "one's right to express individual thoughts and opinions," yet many of your own employees believe that Activision Blizzard's decision to punish Mr. Chung runs counter to those values. Because your company is such of pillar of the gaming industry, your disappointing decision could have a chilling effect on gamers who seek to use their platform to promote human rights and basic freedoms. Indeed, many gamers around the world have taken notice your company's actions, understandably calling for boycotts of Activision Blizzard gaming sites.

As China amplifies its campaign of intimidation, you and your company must decide whether to look beyond the bottom line and promote American values -- like freedom of speech and thought -- or to give in to Beijing's demands in order to preserve market access. We urge you in the strongest possible terms to reconsider your decision with respect to Mr. Chung. You have the opportunity to reverse course. We urge you to take it.

What will Blizzard do now that US lawmakers have taken notice of this debacle? We will see more players speaking up about Hong Kong and more bans handed out as a result?

One thing’s for sure, BlizzCon 2019, which kicks off in two weeks on November 1, is going to be a very interesting show.