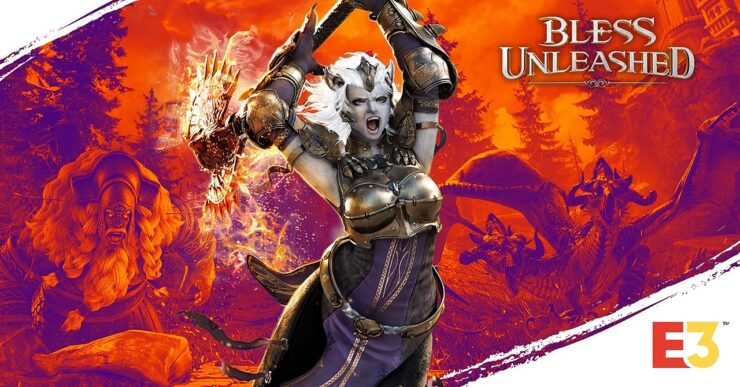 Bless Unleashed, the fantasy MMORPG developed by Round 8 Studio and published by Bandai Namco for Xbox One, is about to begin its second beta test. It'll take place between Thursday, July 11th, through Monday, July 15th, and we've got ten thousand codes that will let you in right away.

Just complete the actions in the Gleam form below and take your code. You'll then redeem it as you would for any other Xbox One code, right on the console or via the Microsoft website.

As an added treat, today we're also sharing our full developer interview from E3 2019, where we caught up with David Jaloza, a producer on Bless Unleashed. Check it out below for plenty of details on the game.

I've played the first beta on Xbox One and there was feedback regarding input lag issues, specifically during combat situations. How are you addressing this?

That's something that we're looking into deeply. It was one of the major points of feedback that was brought up throughout the beta. In our next beta, we've done stuff on the client side to address it, we've added tracking. If there are delays above a certain millisecond threshold, we're going to get a report on it. We're also determining if we need to put more servers places, if it's a latency issue, or if it's something on the client that needs to be worked out. We put a lot of stuff in place. So for the next beta, we're going to get a lot of data and hopefully, we've improved it already.

So you believe it's mainly due to latency?

That's a hypothesis, but we're not entirely sure yet because what the community says lag, it can mean a bunch of things. You know, the end user doesn't actually know what's going on, they just know that, like, they press something and it's not as reactive as they would like. We're looking into it on several fronts.

Just my impression playing the game is that it may be largely due to lag issues, which makes sense since the servers were apparently only in the USA for that beta test and I was playing in Europe. But I think it's also partly due to the developers putting a bit too much of a delay after hitting the button, probably in an effort to make the combat feel more impactful and strategic. That probably needs to be toned down a little.

We've already taken steps on the client side to minimize that. We're looking on the client side, we run debug tools to test what the actual delay is and how we could bring it down. So we'll see how that goes with the next beta. It's hard to tell because we're testing with our internal server and we're in the US, and the Korea team, they're also testing on our servers, but they have lots of latency too. So we're going to be opening up a European server for the next beta test and then get feedback from players on the EU server. It's definitely something that we're taking seriously.

All right. How many beta tests do you have planned before launching?

As of right now, it's going to depend on this next beta. If it goes how we want, then we're looking good to start setting up our release schedule. If there's, you know, if this latency issue is still there and players are still very vocal about it then we would take the time and get it right. Yeah, you'll get one flash in the pan for a release and you want to be right, and there are some other bugs and issues that came up during the last beta that we're also tackling.

Bless Unleashed will be a free-to-play game, therefore a big topic is how you're going to monetize the game. Can you talk about what will be in the in-game shop?

We're very cognizant of the pay-to-win stigma with free to play MMOs especially. So we're trying to steer very clear from that. Loves, a lot of it is going to be customization. Things like costumes mouse, like, you know, vanity items that have no sway on how fast you move or your stats, it's basically just how you look. We will probably add some convenience features. So you might teleport for free or get double XP for an hour, things like that, it's basically using time versus money. Nothing that would make the game imbalanced or unfair. But if you pay a little bit of money, perhaps you would progress a little faster. We wouldn't do anything extreme like boosting a character to the level cap, but just convenience to both the players and the developers since we do have to monetize in some way after all. But we definitely are staying as far away from even the perception of pay to win as we can because you know, there are games that say they're not pay-to-win, and maybe they're not, but if the perception is there that they are then that's just as bad. So we're very cognizant of it.

It's a hard kind of balance for a free-to-play game.

It really, really is. And you know, if you asked 10 different people what pay-to-win means, you might get 10 different answers. For Bless Unleashed, we're sticking with the store being heavy on cosmetics and minor convenience items.

PvP for sure. I believe our Battleground system is slated to be out for the launch. That's your 15 versus 15 type of thing. We will have several dungeons. I want to say around a dozen, but you know, plus-minus, based on how the tests go. We will have several field bosses. You know, have you played the beta and seen the Wolf King or the Giant? Those will be there. Guilds will be a feature as well.

Can you level up your Guild to get benefits like in other MMORPGs?

That will be coming, but it won't be for launch. There'll be a lot of content at launch and then the goal right now is every month or two to have content updates with more quests, more items, that sort of thing.

Do you think you're going to have paid expansions for Bless Unleashed at some point or just free content?

As of right now, it's all free content. We'll have minor content updates and then we'll have larger drops every several months. And then of course, since it's a game as a service title, we'll be doing updates very frequently. Based on player feedback, what our players do, what are they not doing, what do they like doing, what do they not like doing and then using that data we'll be adjusting to really give the players what they want.

No, not right now. The fact that we're using Unreal 4 makes us very conscious of how much stuff is on the screen in order to keep the frame rate steady. Even in the field bosses you may have seen in the beta, we have to implement changes to scale that back just to keep the performance up. We'll be looking at that during the next beta to find what's the middle ground between lots of players on screen doing fun stuff and actually being able to move your character.

Speaking of frame rate, do you have any plans to add a performance option for Xbox One X users?

I've seen it in the plan. I don't know if it'll be there for launch or not. But we are doing LOD and stuff like that for the non-Xbox One X consoles. So you know, we might put on some default textures if the frame rate starts dropping, just to keep that performance up, regardless on what console you're on.

You mentioned PvP Battlegrounds. Any plans for Guild vs Guild?

There'll be a larger meta, our RvR type system. I can't talk about it much since it's still under development. We will have an Arena type PvP system where three vs three groups will fight but I really can't speak to a Guild versus Guild type of PvP system.

Another major feature in most MMOs player housing. Is it going to be instanced in Bless Unleashed?

Right now, it will be instanced. It's kind of a farm where you'll be able to get workers to help produce crafting items for you while you're not there. You will get to keep your mounts there, you will get to customize it somewhat. And then as time goes on, we'll keep expanding it.

Many MMORPGs also offer the ability to put trophies on the walls of your house or to invite other players to showcase your decorations.

I do not believe it's scheduled to have the ability to invite other players at launch, but it is on the plan. As far as like how granular you can get with customization I can't really speak to that, but I know it's in the plan.

Bless Unleashed is going to ship with five classes but one popular archetype, the Rogue/Thief character class, is missing. Do you have plans to add more classes later?

As the game goes on, we do plan to add more classes. I can't really speak to the order of which they'll be added or the timing, but we do want to expand it, though we're just starting with those five.

Is there any particular reason why you went with the Xbox One as the lead platform with Bless Unleashed?

That's a good question. You know, Bandai Namco has a good partnership with Xbox. I just think it made sense, though as far as the specific reasons I can't really comment on that.

Do you want to add something as a closing comment for the game's community?

Just that we are excited for people to jump in. Getting player feedback is always really good, we believe strongly in community and listening to the community because ultimately the game is for them. So you know, being active on on on Twitter, we want to engage with them to get more feedback, that's how we'll steer the game in the right direction.

Alright, thank you for your time.