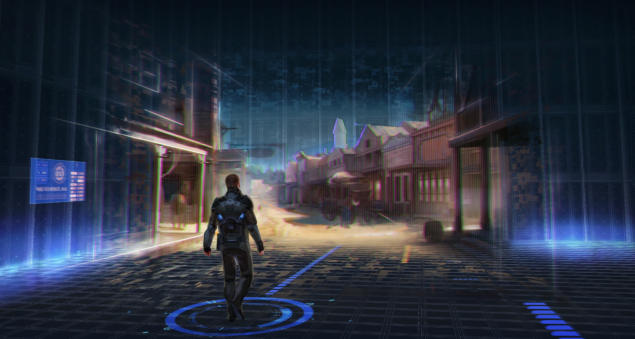 After the huge tease reported a few days ago, John Romero and Adrian Carmack finally announced their new project. It's BLACKROOM, an Unreal Engine 4 powered FPS targeting a release in Winter 2018 for PC and Mac.

BLACKROOM is a visceral, varied and violent shooter that harkens back to classic FPS play with a mixture of exploration, speed, and intense, weaponized combat. Use fast, skillful movement to dodge enemy attacks, circle-strafe your foes, and rule the air as you rocket jump in the single- and multiplayer modes. Powered by Unreal Engine 4 and fully moddable on PC, the game is being developed with community at its core.

In the single-player campaign, step into the shoes of Santiago Sonora, Chief hNode Engineer at HOXAR™, Inc., the world’s foremost creator of holographic simulations. The company’s exciting BLACKROOM™ technology allows users to be anywhere at any time, creating fully-realized holographic worlds that are indistinguishable from reality, all inside of a giant black room. When testing of their new leading-edge Predictive Memory technology reveals troubling anomalies that blend the real world with the virtual, you’re sent in to investigate and are swept across a staggering and dangerous array of simulations developed for BLACKROOM™ users, from medieval castles to horror sets. Peering into your mind and tapping into your deepest memories and fears, however, it’s clear that the BLACKROOM™ is not all fun and games.

The big news is that John Romero and Adrian Carmack are back together and obviously they released statements to explain this reunion.

It’s been great working with John again, and we’re really setting out to produce a visceral FPS. Because of the setting, we have a lot of freedom to create environments that players might not expect in an FPS. BLACKROOM technology lets its users enter just about any universe imaginable, and gives them the power to alter the world. That gives me lots of artistic freedom.

The Kickstarter campaign just went live, with $700K set as the minimum funding goal for BLACKROOM. According to the FAQ, additional platforms (like consoles) may be considered depending on the Kickstarter's performance.