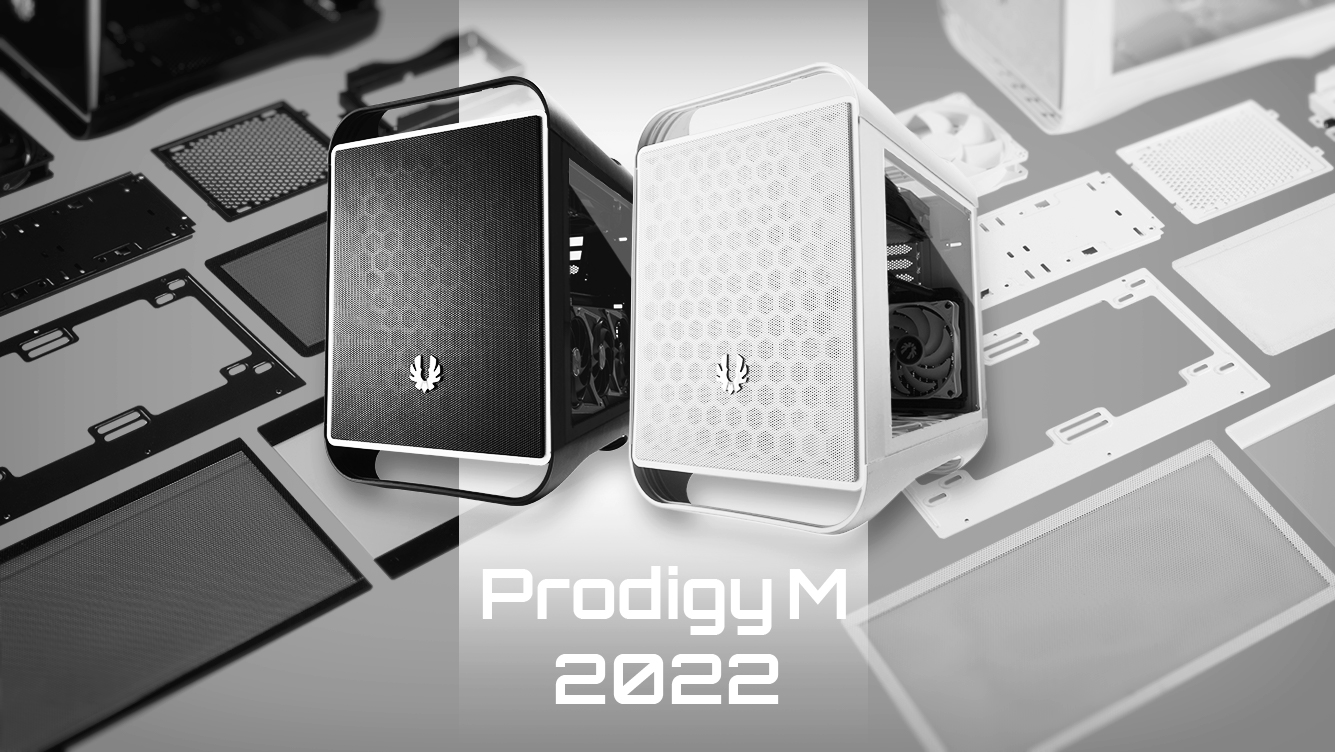 BitFenix has launched the new Prodigy M series of cases, flavored in black or white options, as well as aRGB options for both colors.

The newest BitFenix Prodigy M case comes individually in either black or white, as well as offering aRGB models in the same case colors. The case has easy-to-carry handles that are flexible to allow the user the ability to use several different spaces to set your chassis. The chassis is surrounded in thick 1mm metal and black or white matte colors for a "premium outlook" of style. From previous models, they moved the location of the ODD drive bay, which used to be located near the front, to allow for maximum airflow through the front panel.

The compact and modern chassis with high quality tempered glass is suspended on Reinforce handles to showcase the components. With the support of up to top tier NVIDIA RTX 3090 series and AMD RX6900XT series GPUs or the Titanium ATX power supplies, the new Prodigy M 2022 efficiently supports large components with a smart layout design.

The modular brackets allows the PSU and HDDs to be mounted on different locations clearing the way for support for up to 280mm radiator at the top and 120mm radiator in the rear. Pairing this up with the choice for either vertical or horizontal GPU mount
and rich assortment of accessories, makes the new Prodigy M 2022 an ideal chassis for a variety of builds.

The Prodigy M series also showcases a pre-installed 4mm tempered glass on top and sides", as well as hiding the cables from view, allowing users to have "unrestricted view" in the case and it's components. Both models allow for GPUs of "up to 339mm," both vertically and horizontally, and the company states that the chassis' are constructed to be ready for "support of up to NVIDIA-style RTX 3090 or AMD-style RX 6900 XT. They also let users know that if cooling the GPU feels restricted, the filter can be switched at any convenience.

With its small form factor, the Prodigy M allows for a lot of customization in any user's build concepts. With the GPU allowed to be installed both vertically and horizontally, the user can install up to two 120mm fans at the bottom of the case, or even water coolers up to 280mm in length (with included brackets) for more cooling options.

The new Prodigy M series also offers a 6010 fan (60 x 60 x 10mm) pre-installed to focus on cooling and maximizing airflow to the GPU.

Unlike standard compact fans, the ones included in the Prodigy M 2022 are custom fine tuned and profiled by BitFenix airflow engineers to have a noise level of only 25.7dB(A) at 2300 ±10% RPM.

BitFenix has created the Prodigy M series to come with motherboard standoffs compatible with both ITX and MicroATX motherboards. The Prodigy M offers a 13A extension cable—three amperatures higher than most standard 10A power cables—allowing for more "reliability and safety at high power load levels." Hard drive support is available in the new Prodigy M, with the capability of "2+2 3.5-inch drives and 2+3 2.5-inch drives," placing them either on the bottom or side with compatible mounting brackets.

While BitFenix Prodigy M (2022) offers the clean and refreshing look for the build, it also keeps all those high performance components free of dust. The Prodigy M (2022) comes preinstalled with easily removable magnetic dust filters at the front, top and also for the Power Supply Unit at the bottom. All these filters are 3 sided for the best dust filtering possible. This means that a system built around the new Prodigy M is going to be reliable and robust for a long time while also looking sleek.

The most interesting feature is the location of the IO ports on the BitFenix Prodigy M series. The company has located the IO ports to the side of the case to allow for ease of use and efficiency. As with most newer cases, the company offers "single USB 3.2 Gen 2 Type-C port along with two USB 3.0 Type-A ports offer high-speed connectivity at your fingertips while that standard 3.5mm audio jacks."