When I run around a convention show like PAX East or E3, thinking about eating is often one of the last things that comes to mind. I’m lucky to grab a breakfast bar with my morning injection of coffee, let alone stuffing my face with real food. When I received an invite from Mega Cat to check out the world’s first ‘run ‘n gun ‘n eat,’ I let my hunger get the best of me. If it weren’t for such an innovative pitch, I might have otherwise missed out on checking out Bite the Bullet. 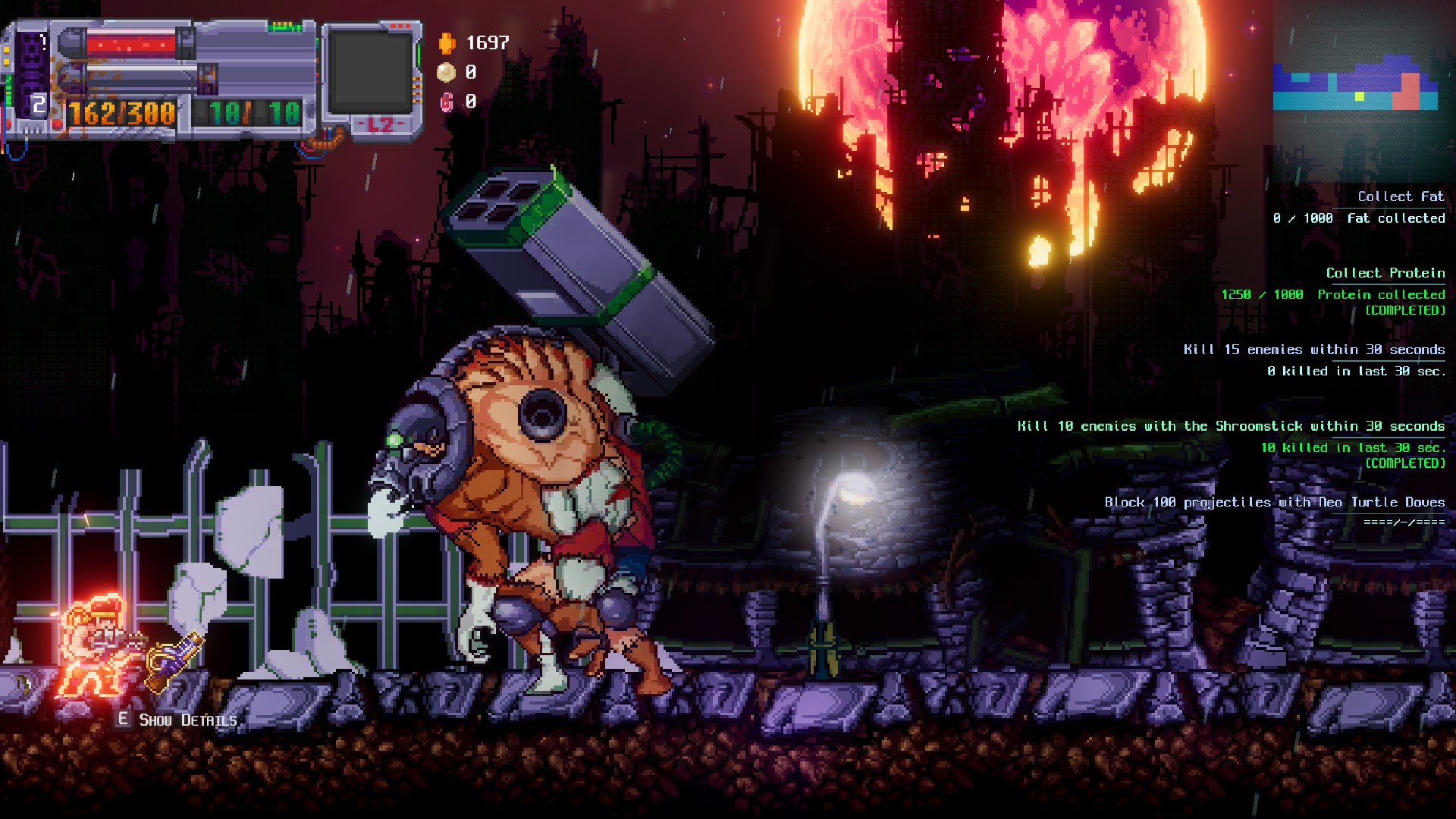 So, how exactly does one run, gun and eat in any particular order? First, you start with a platformer in a similar mold to Mercenary Kings, where the running and gunning also requires a bit of light platforming and navigating levels that are filled with alternate paths and pratfalls instead of just moving from left to right. The jumping could still use a bit of work, as precise jumps and wall-jumping both feel hindered by the unstable frame rate. I fell to my doom a great number of times when jumping between train cars or navigating through pimps of radioactive sludge.

The gunplay to Bite the Bullet is right at home with the Contra-likes of recent years. Shooting in 8-way directions gives you proper triggers control while having multiple weapons in your arsenal helps to have the right tool for the job. Your primary pea shooter does a fine job on its own along with having unlimited ammo, but is quickly outclassed by any secondary you might pick up. These more powerful weapons are all unique in their own ways and won’t be a one-size-fits-all approach to your arsenal. A family-sized shotgun is great for point-blank range, but like shotguns in any game that isn’t Call of Duty, the damage range is pitiful before it drops off. The same goes for the critter cannon, a grenade launcher of sorts that lobs live creatures at your enemies. Occasionally, striking down unique monsters can provide a special variant of these weapons that lasts for the current stage and given their increased effectiveness are worth hunting down when you can.

Bite the Bullet has no shortage of delectables to get your fill, whether they’re real food sources or the enemies you come across. Most enemies aren’t just ready and willing for you to take a bite out of them; they’ll first need to be brought down to critical health and stunned beforehand. Eating enemies will satisfy your needs for carbohydrates, calories and fat, and must be considered in moderation. Eating too much fat, for example, leads to a visible beer gut on your playable hero, slowing them down while also increasing their hardiness and ability to take a few extra hits. The developers clued me in to a few extra tasks you can try to accomplish in Bite the Bullet, like being a robovore and only eating metal and robots.

As the old idiom goes, you are what you eat. In Bite the Bullet, consumption leads to a few everlasting effects in your roguelike run. Much like the shaRkPG Maneater, those calories you consume can be converted into skill points and internal mutations to grow your character’s fighting prowess. Once in a while, eating a specific variety of mutated foe can affect the gun in your hands, mutating into a rarer variant as well. I never quite understood how that really worked, but in a game where you can eat dozens of alien foes and robots in a stage, I stopped trying to make any sense of it all. At the end of each stage, you’re ranked on what you eat by vomiting up a fleshy pile of gore onto a weight scale and judged according to your voracity more than just your tenacity to make it through without dying.

Mega Cat Studios clued me in to just how much dedication they’re putting into creating the first run and gun and eat. A number of competitive eaters will make cameo appearances in Bite the Bullet and you might even learn a little bit about their colorful careers of eating bicycles and other acts of gluttony that I never could think possible. Sadly, Takeru Kobayashi, the man who once held the title of eating the most hotdogs in ten minutes during one of Nathan’s annual hot dog eating contests and even out-ate a bear on national television, isn’t among the notable names of competitive eaters in Bite the Bullet.

If just running and gunning isn’t enough to satisfy you, that craving for Bite the Bullet won’t linger on too long. This flavorful smorgasbord of shooting and stuffing your face will be here quicker than it takes to cook a luau pig. Bite the Bullet will be released on Nintendo Switch, Xbox One and PC
(Steam) in Q2 2020 for $14.99.