Biostar has added a 1 TB variant to its M700 series, offering a capacity of 1 Terabyte! The 1 TB M700 series SSD uses a PCIe Gen3 x4 interface, providing up to 3 times the performance versus traditional SATA III SSDs

The M700 series previously only had a 256 GB model and a 500 GB model, but with the recent expansion to the 1 TB model, they now offer competitive speeds along with enormous capacity. This M700 features a standard M.2 2280 form factor and is capable of high-performance transfer rates with speeds up to 2,000 MB/s sequential read and up to 1,650 MB/s sequential write possible. 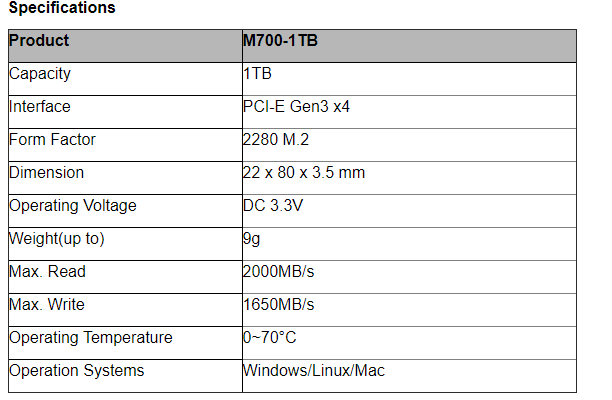 This drive, like the other drives in the M700 series, utilizes a PCIe 3.0 interface, which will be beaten by most PCIe 4.0 SSDs as they offer much higher speeds overall. This SSD is currently available for purchase in the US presently starting from $95 for bulk orders, and the UK pricing and availability has yet to be announced or confirmed. The $95 price tag makes this NVMe SSD very affordable for bulk orders, non-bulk order prices have not been announced, but if the build order pricing is close to the individual, then this NVMe SSD will be one of the most affordable NVMe SSDs!