Intel Bay Trail will now be ‘inside’ Chromebooks – Intel, Google Plans to Rival ARM in a New Partnership

At the joint event we told you would happen this Tuesday, Intel and Google were expected to make major announcements related to Intel's support for Google's Chrome OS based Chromebooks. Well, they haven't disappointed either, with the Chromebook range being significantly increased. At the press event on San Fransisco on Tuesday, Chromebook designs were increased to 20. Several OEM including Dell, Acer, Asus, LG and most importantly, Lenovo also announced new models of the low cost notebooks running on Chrome OS. 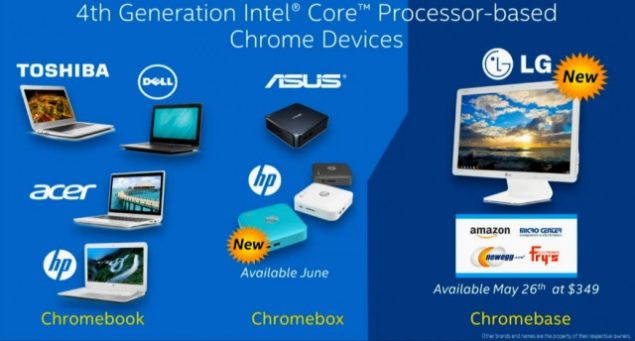 The announcement on Tuesday is the strongest renewal of commitment between the two giants, who have a long history of co-operation. The first half of the presentation focused primarily on devices built around a Celeron Haswell. They also featured minor upgrades which include a Wi-Fi upgrade to 802.11 ac. The low resolution 11.6 and 13 inch displays are to sstay the same. All of these upgrades to Chromebooks will come at the same price as today - around and above $ 300. Intel also mentioned that it will be the only processor vendor to support the 64-bit Chrome OS variant. What lies ahead for Google's partnership with ARM is now officially open for speculation. There was also no mention of any ARM powered Chrome OS devices.

Google is also adding new features to the Chromebooks, which will increase their offline usage. This was a common complaint from many users wanting more PC like performance. Google has also recently added both the ability to edit videos and watch movies online on the Chromebooks. It should also be noted that the Chromebooks have a very short update cycle. This allows Google to be particularly sensitive to user demands and needs. According to Caesar Sengupta, vice president of product management for Chromebooks at Google, Chromebooks can now be used for more offline purposes than two years ago. Their cloud computing support makes them a viable alternative for PCs as well. Google is also targeting Chromebooks particularly at users looking to replace XP PCs. More applications which support offline working are also being added to the Chrome App Store Sengupta said. “As the ecosystems evolve, more and more developers are writing apps using Chrome APIs so they work offline,” he said. 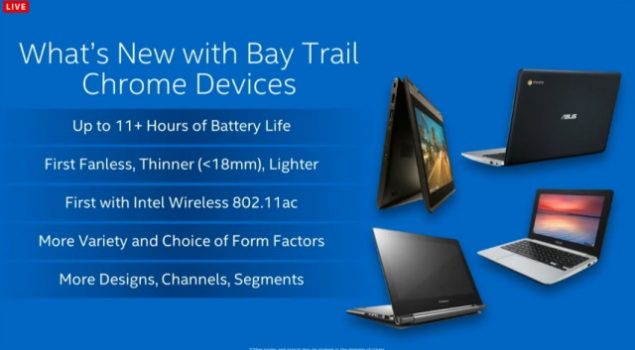 Bay-Trail Support For Chromebooks Made Official. Acer, ASUS, Lenovo and Toshiba All To Release Chromebooks powered by Bay-Trail.

Announcing the depth of Intel's partnership with Google, Navin Shenoy, VP Intel Mobile Client Platform Group, said: "Intel has grown to become the No. 1 microprocessor in Chrome systems. We've been working on five generations of Chrome and after Google, Intel is the largest contributor to the Chromium OS. Intel chips are the first and only to support 64-bit Chrome OS." With Bay Trail coming to Chromebooks, we can expect a number of upgrades and performance enhancments. The processor range is known for its efficient power management and long battery life. Despite this, it delivers strong performance results and is cheap to boost. The Chromebooks featuring Bay Trail will also be fanless - first of their kind. This will greatly reduce noise in a thin form factor. The Chromebooks featuring Bay Trail will have Wireless 802.11 ac as well. Presently, specifications for only Lenovo's N20 and N20p and Asus' C200 and C300 featuring Bay Trail are available. You can check out this for complete information about different models and manufacturer specifications. Prices of the Bay Trail variants are expected to be between $250 - 350.

"Every Chromebook keeps getting better over time," said Caesar Sengupta, vice president of product management for Chrome OS. "This is what differentiates it from every other operating system in the market, every 6 weeks all Chromebooks that are in the field will update with the latest and greatest. So your device keeps getting better. Think about what type of device you can buy in consumer electronics that actually gets better over time." What we should all be asking is how are the Chromebooks getting better in terms of performance and higher end models? There was no mention of any variants to fill the existing gap between netbooks and the flagship Chromebook Pixel. Furthermore, where ARM fits into all of this is still unknown. No ARM based devices were demoed except for a comparison of a new Haswell Chromebook with a Samsug 3 series Chromebook. Unsurprisingly, the former beat the latter by miles - surprisingly in Google's presence. This increase in models of the Chromebook and concrete support by Intel is indeed a big win for Google. Yet how this will all work out in the long run, particularly with stats reporting the decline in sales of laptops and notebooks and the absence of Chromebooks catering to the high-end market is yet unknown.