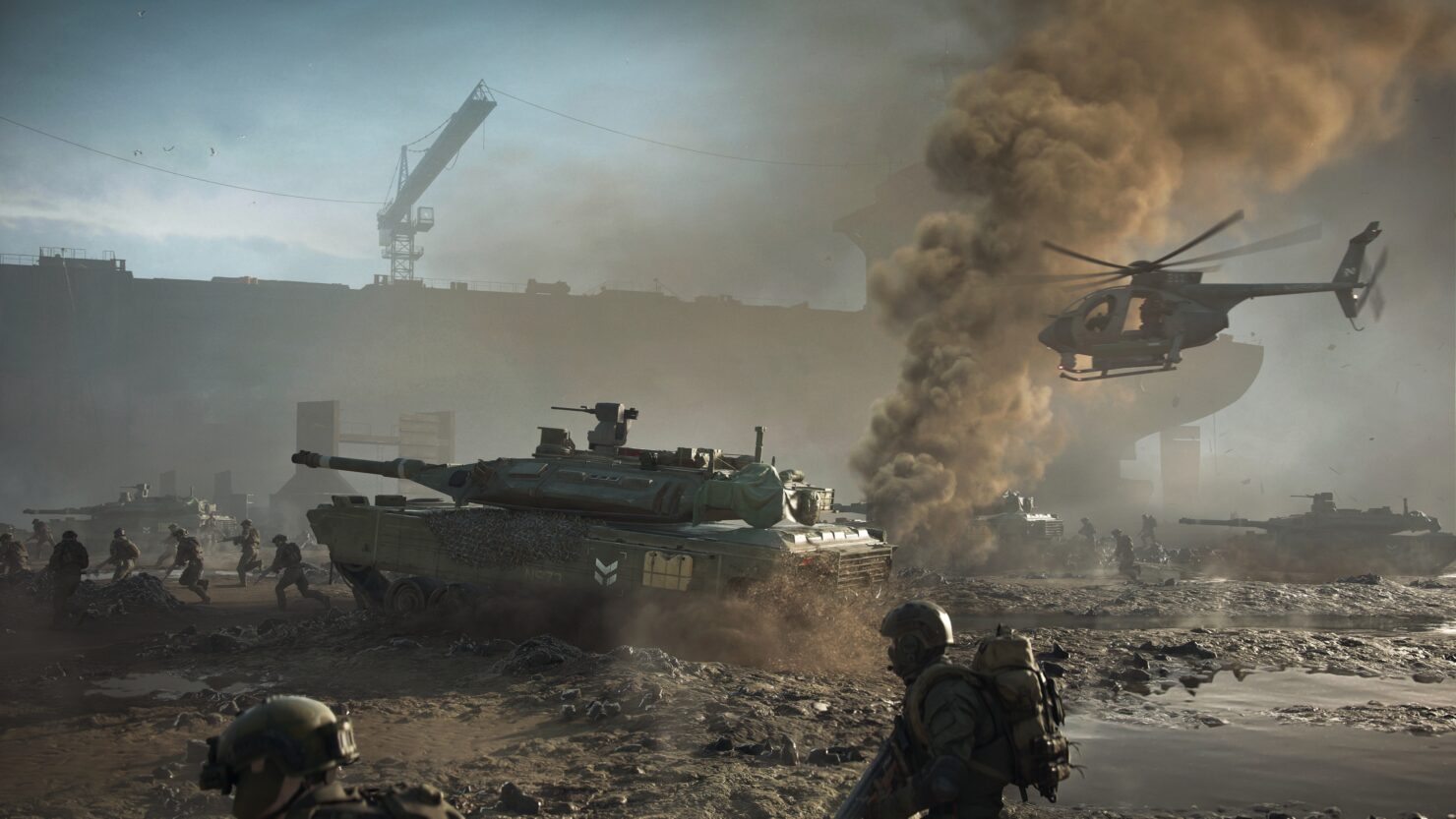 Battlefield 2042 has just been confirmed to be the official title of Battlefield 6. You'll find all the information on the release date, pre-orders, and pricing in our dedicated story.

Here, though, we'll go into a deep dive of the game's many changes and new features as they were presented to us during a recent press event hosted by DICE.

Strap in; there's a lot to talk about.

The basics: 128 players, 3 different multiplayer experiences (without Battle Royale) but no Campaign

As rumored in the past few months, Battlefield 2042 is upping the scale of its battles on PC and next-generation consoles by doubling the player cap from the usual 64 to 128 players. PlayStation 4 and Xbox One will still be limited to 64 players, however, and their maps have been tailored accordingly.

We knew this, so it didn't come as a surprise. We can't say the same about the fact that Battlefield 2042 won't feature a single player campaign; DICE candidly admitted that multiplayer is what they do best and they wanted to focus on it this time around. There are three distinct multiplayer experiences in Battlefield 2042. The first one, All-Out Warfare, was the focus of this event. It's traditional Battlefield, featuring modes like the franchise trademark Conquest and the new Breakthrough (where teams alternate between attackers and defenders).

Then there's Hazard Zone, which DICE has described as something completely new for the franchise. We didn't really get a lot of information about it, other than it will be high-stakes and squad-based. Given its name and what few details have been shared, we could speculate that it may be about getting into a dangerous area, grabbing money or specific items, and getting out. More information on Hazard Zone will be shared ahead of launch, roughly around the time of the Open Beta test.

The third multiplayer experience wasn't even named yet. We did learn a couple of things, however. It is being developed at DICE LA, and it'll be a 'love letter' to long-time Battlefield fans. As such, we could speculate that it may feature mechanics from earlier titles that have been since abandoned, such as Commander Mode and/or Titans from Battlefield 2142. More information about this portion of multiplayer will be unveiled during EA Play Live 2021 (due on July 22nd). 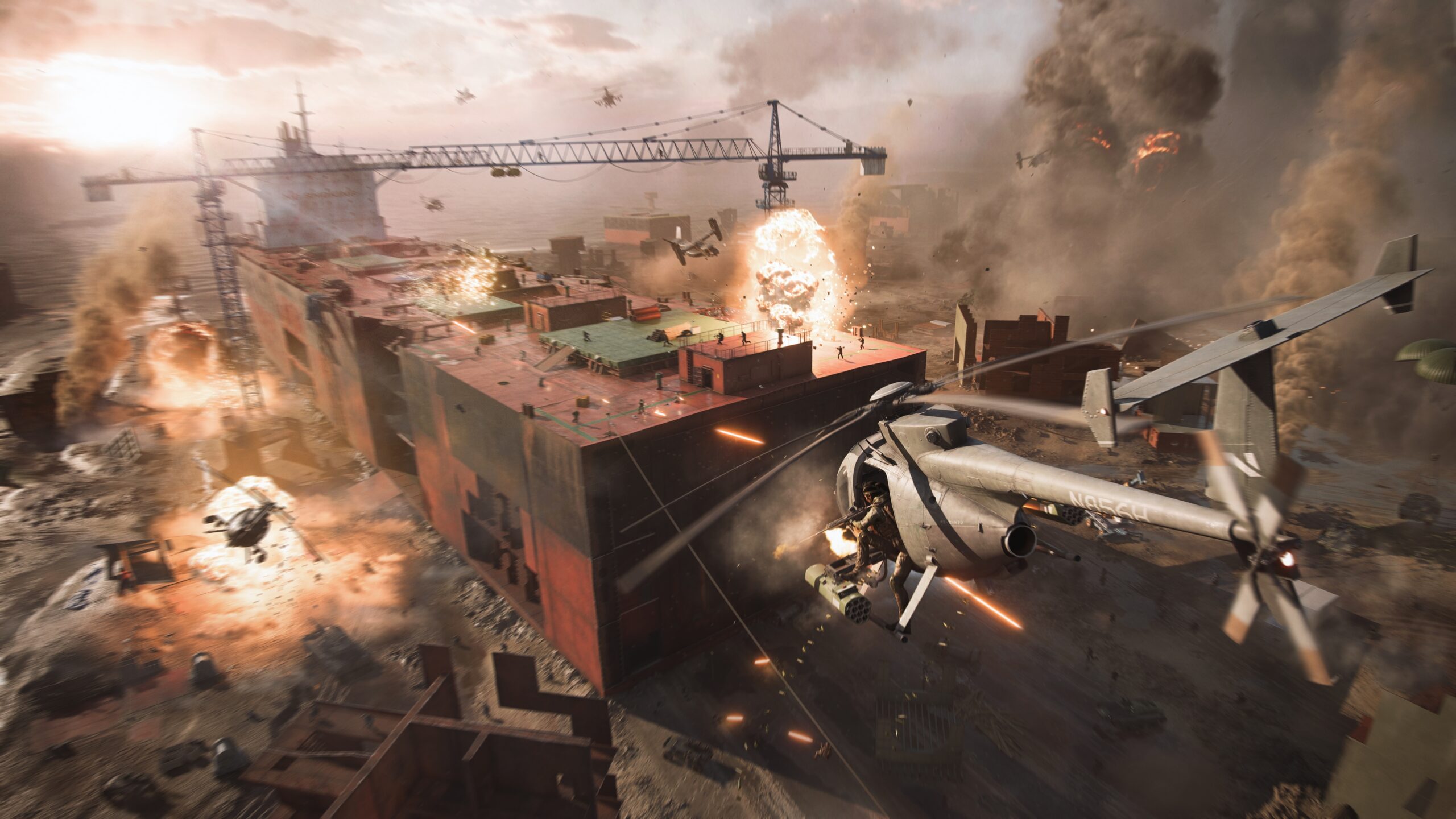 The doubled max player count could lead to concerns about roaming around huge maps (more on that later) without actually finding many players to fight whenever matchmaking doesn't put you in a full match. However, Battlefield 2042 will feature AI bots, which should not only alleviate such fears but also provide newcomers with a softer environment to get started in the game.

You can basically play all alone as a human player in a match otherwise filled with AI on both sides. Or, if needed, it can be a mix of humans and AI. DICE said they've had this on their whiteboard for many years, and they are finally at a place where they can offer it.

The difficulty will be continuously updated from the developer's backend to ensure there is an appropriate level of challenge. Additionally, it was confirmed in the Q&A section that progression would work normally when playing against AI.

The Biggest Maps in a Battlefield Game Yet

To accommodate the increased player count on PC and next-generation consoles, DICE said they had to craft the biggest maps yet for Battlefield 2042, though they will still be of varying sizes. The biggest map will be Breakaway, with a surface area of nearly six square kilometers.

Seven maps have been confirmed to be available for the All-Out Warfare modes. Here's a brief overview for each one:

Kaleidoscope - set in Sogdo, South Korea. Forces here will clash to control a quantum-powered disinformation hub after an attack threatens the global network. 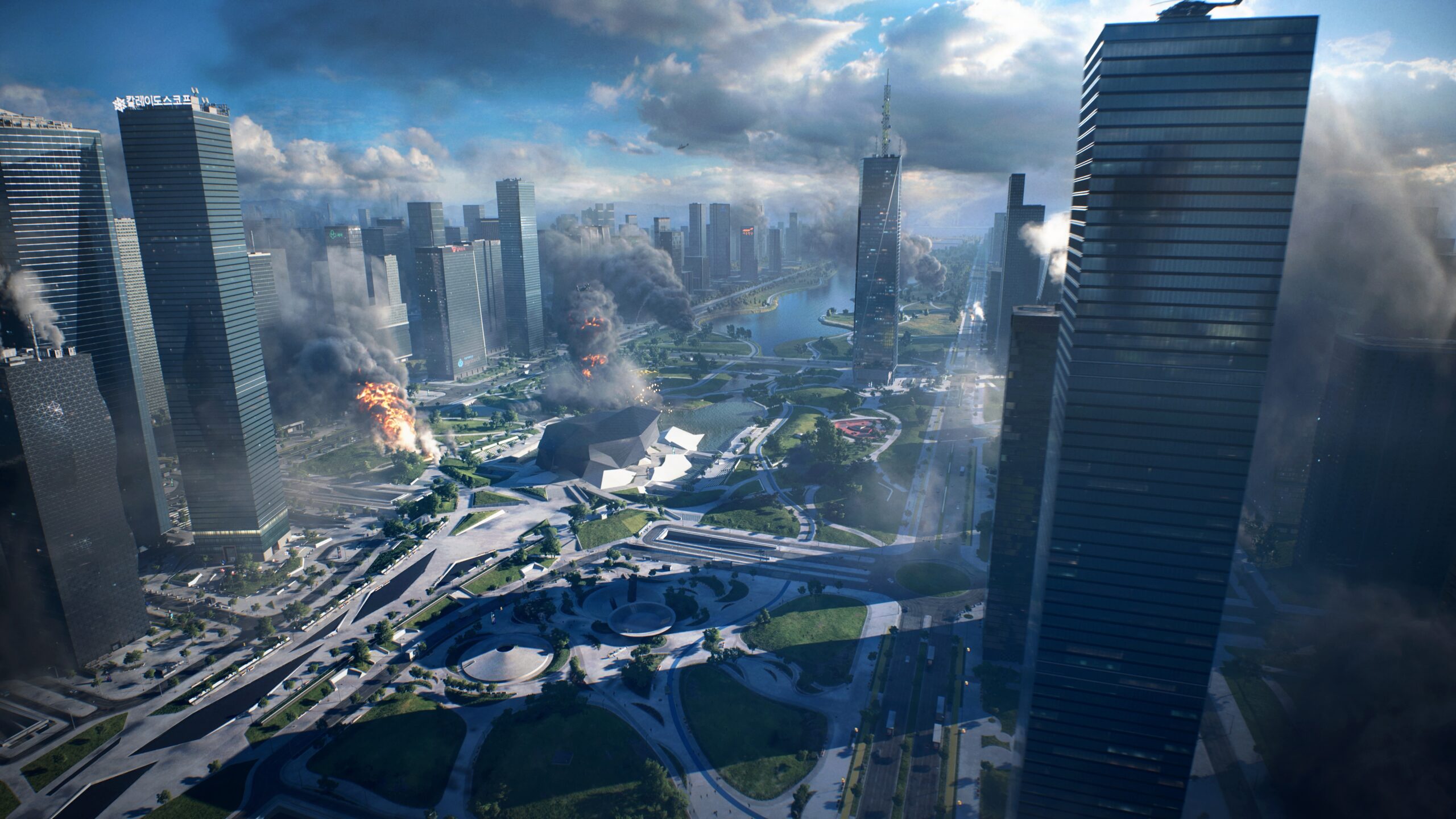 Manifest - set in Brani Island, Singapore. Players will see a strategic flashpoint emerge as global trade chokes this location which is vital for the American supply lines. 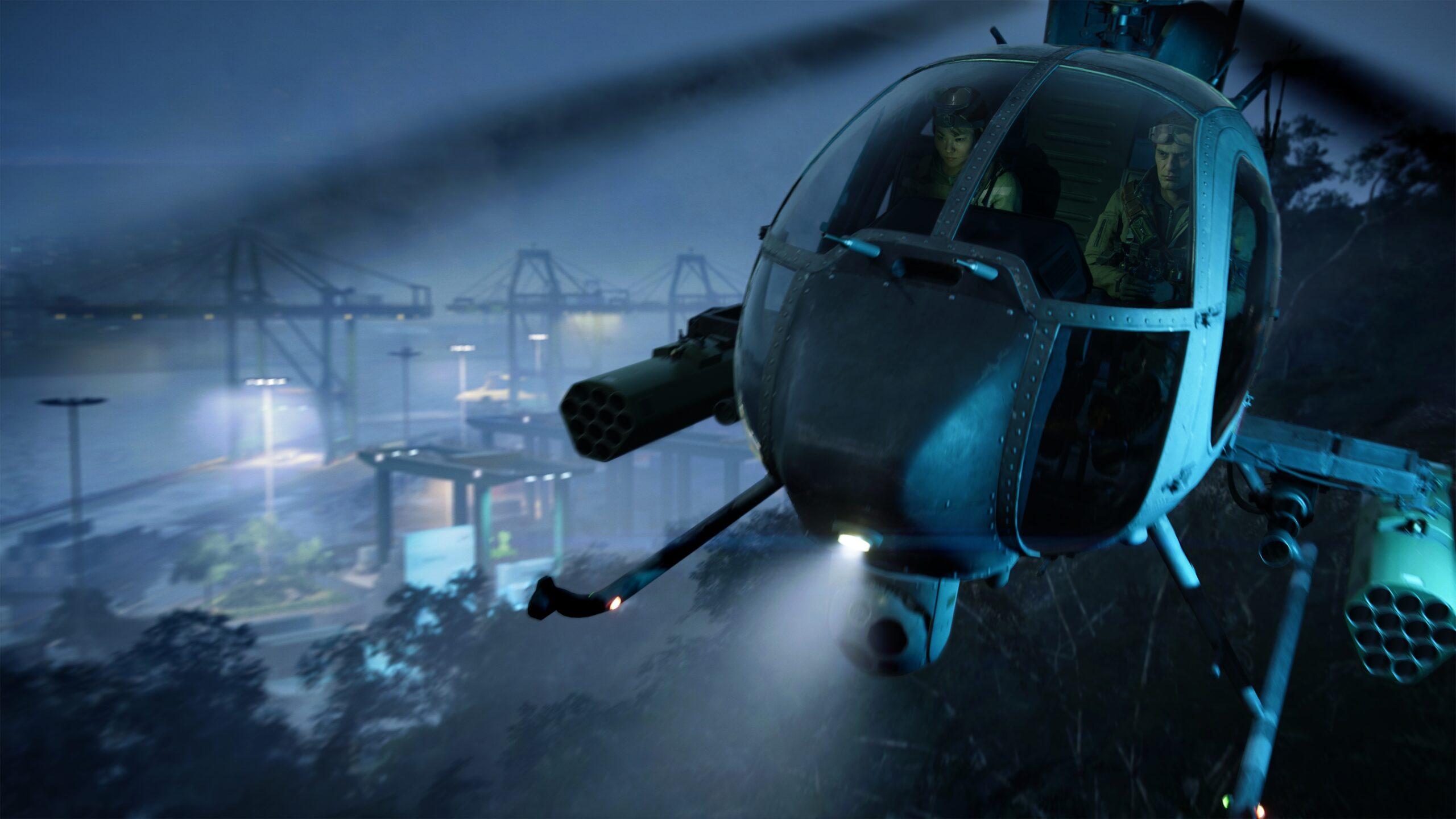 Orbital - set in Kourou, French Guiana. The battle here is over a rocket launch site as a controversial space launch becomes a race against time. 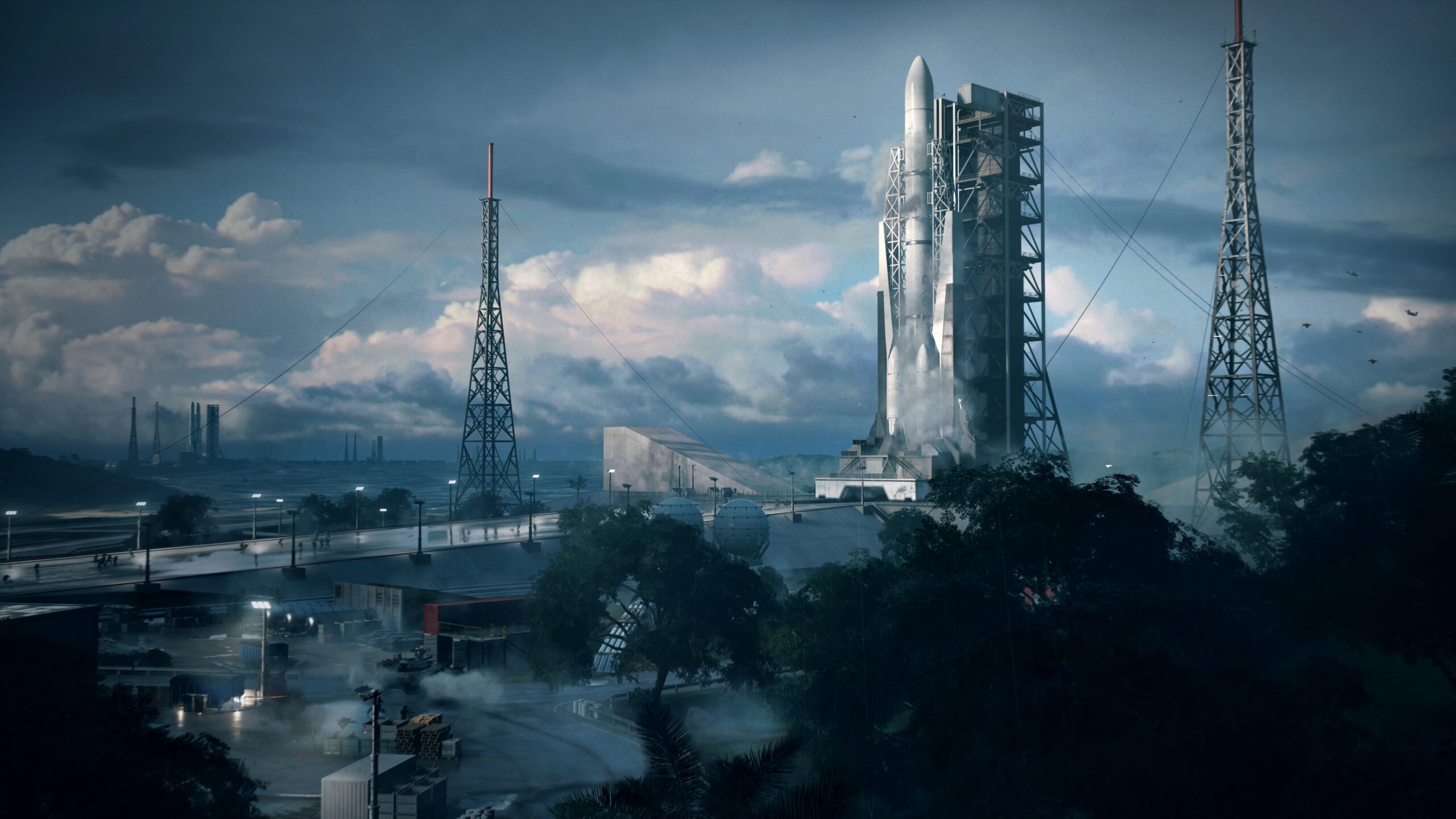 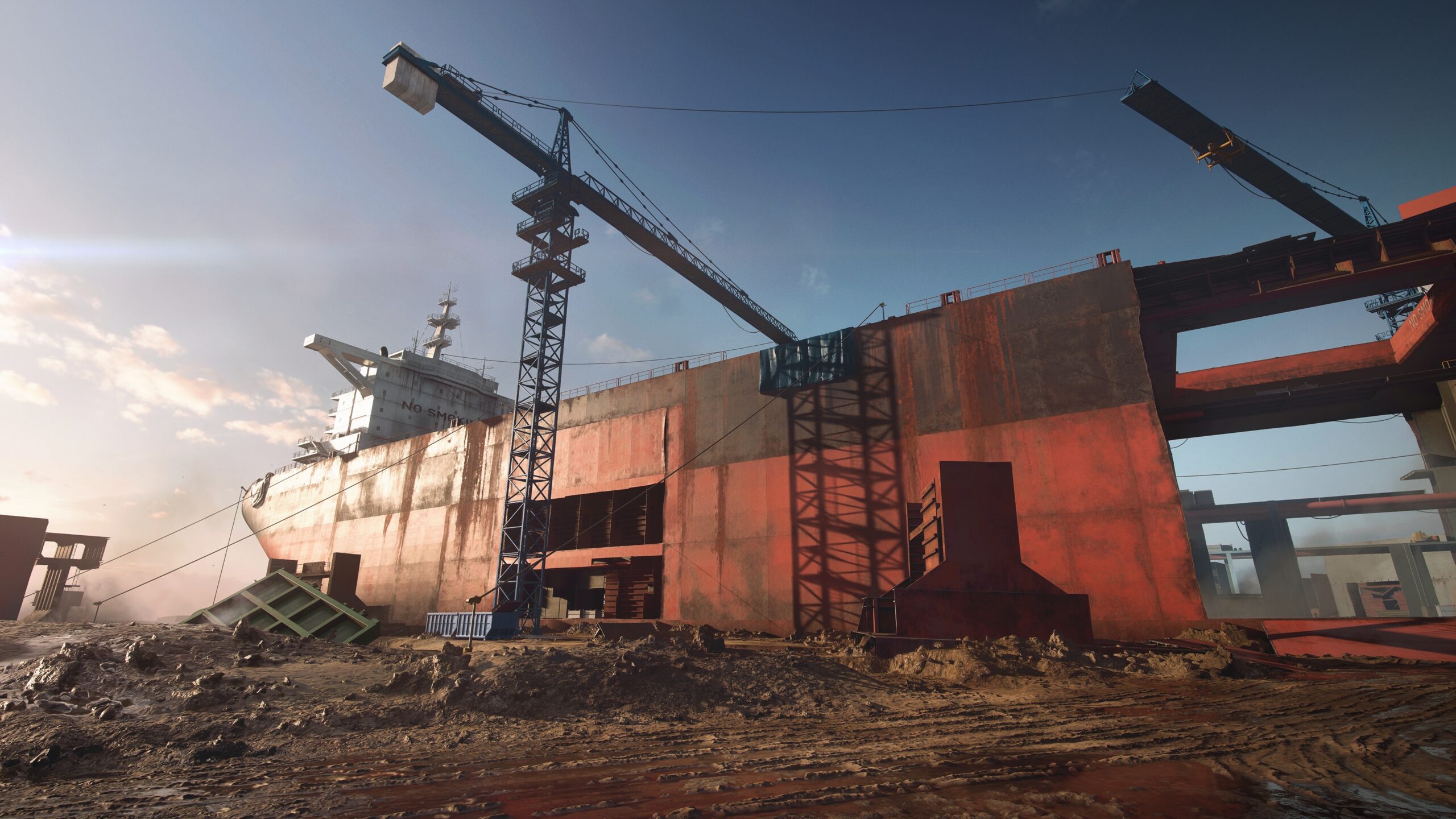 Renewal - set in the Eastern Desert, Egypt. Players will fight for a groundbreaking agriculture technology centre in the Egyptian Desert. 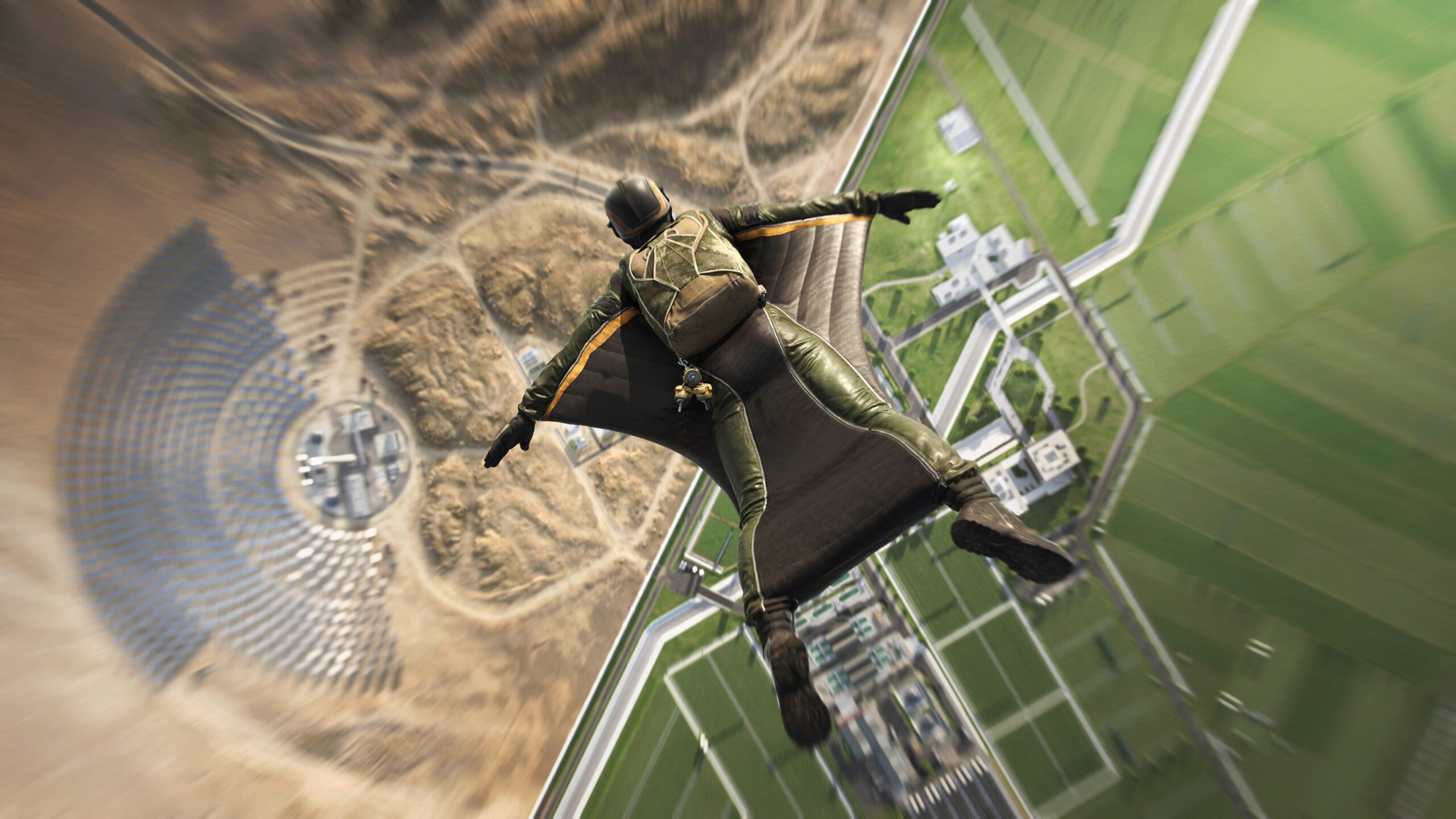 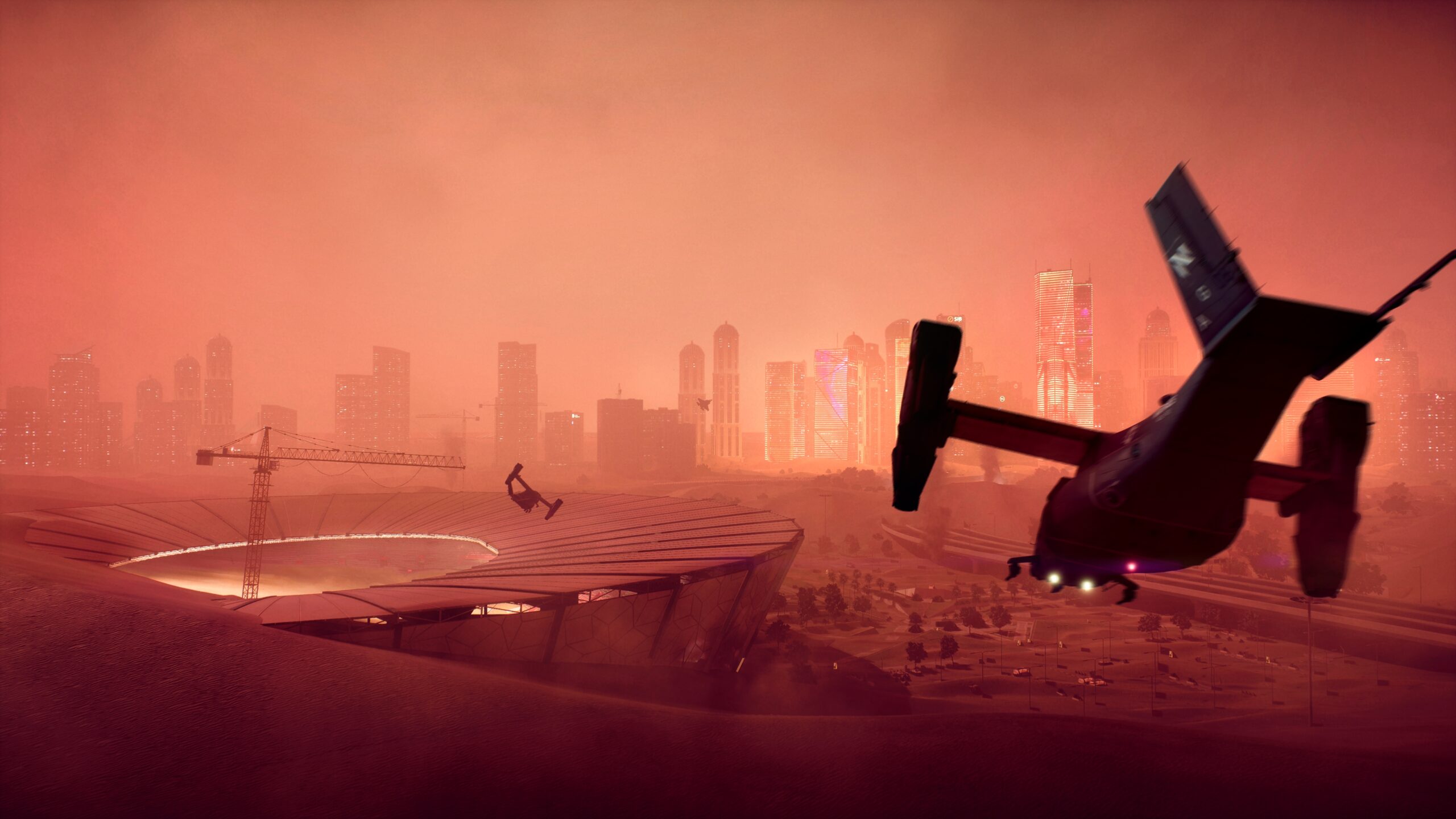 Breakaway - set in Queen Maud Land, Antarctica. Struggle over oil and gas that pushes soldiers to the brink as industry clashes with nature and ice gives way. 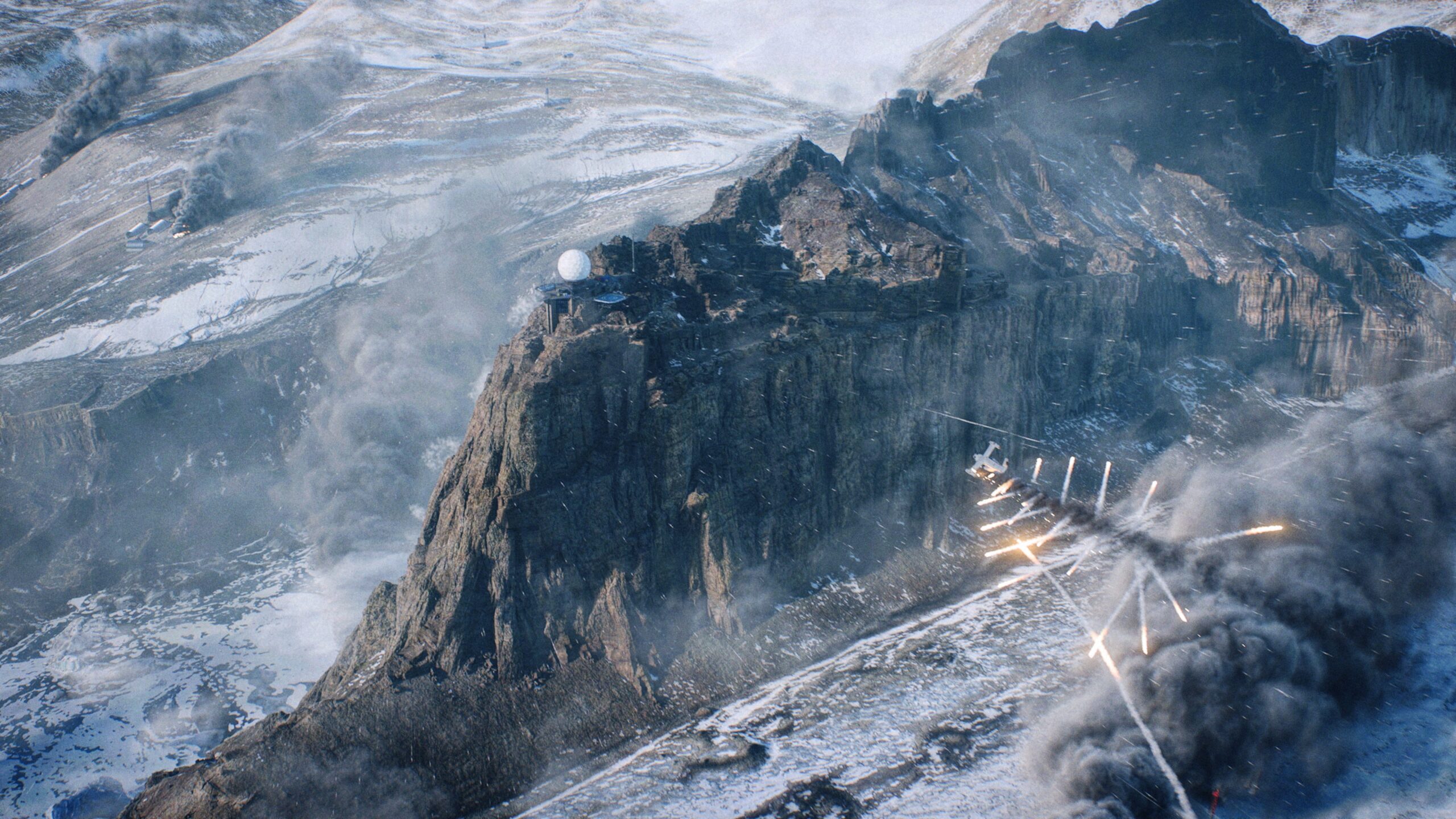 The developers are reworking how objective capture works in Battlefield 2042. In previous titles, you could easily conquer an objective for your team by occupying a single unattended flag. This won't be possible anymore, as we'll explain shortly.

According to Design Director Daniel Berlin, clusters are areas of a map where objectives are focused in a concentrated space. An example could be the stadium that you can see above on one end of Doha's Hourglass map. However, to claim any single cluster your team will have to capture all of the objectives within that sector, which will inevitably mean confronting enemies at some point. The pacing of the action will also change, hopefully for the better.

Battlefield 2042 is set in a near-apocalyptic future where the sea level has risen dramatically and extreme weather events are more common than ever on Earth.

Lore wise, this is the justification for dynamic events such as tornadoes and sandstorms (the latter type can take place in Doha's Hourglass map). For instance, Daniel Berlin cited an anecdote from one of the playtests where he was pinned down by a sniper, but the encroaching tornado flung a vehicle right on top of the sniper, squashing him like a bug.

DICE hinted there will be more such events to be found on the other maps, but didn't talk specifics yet. 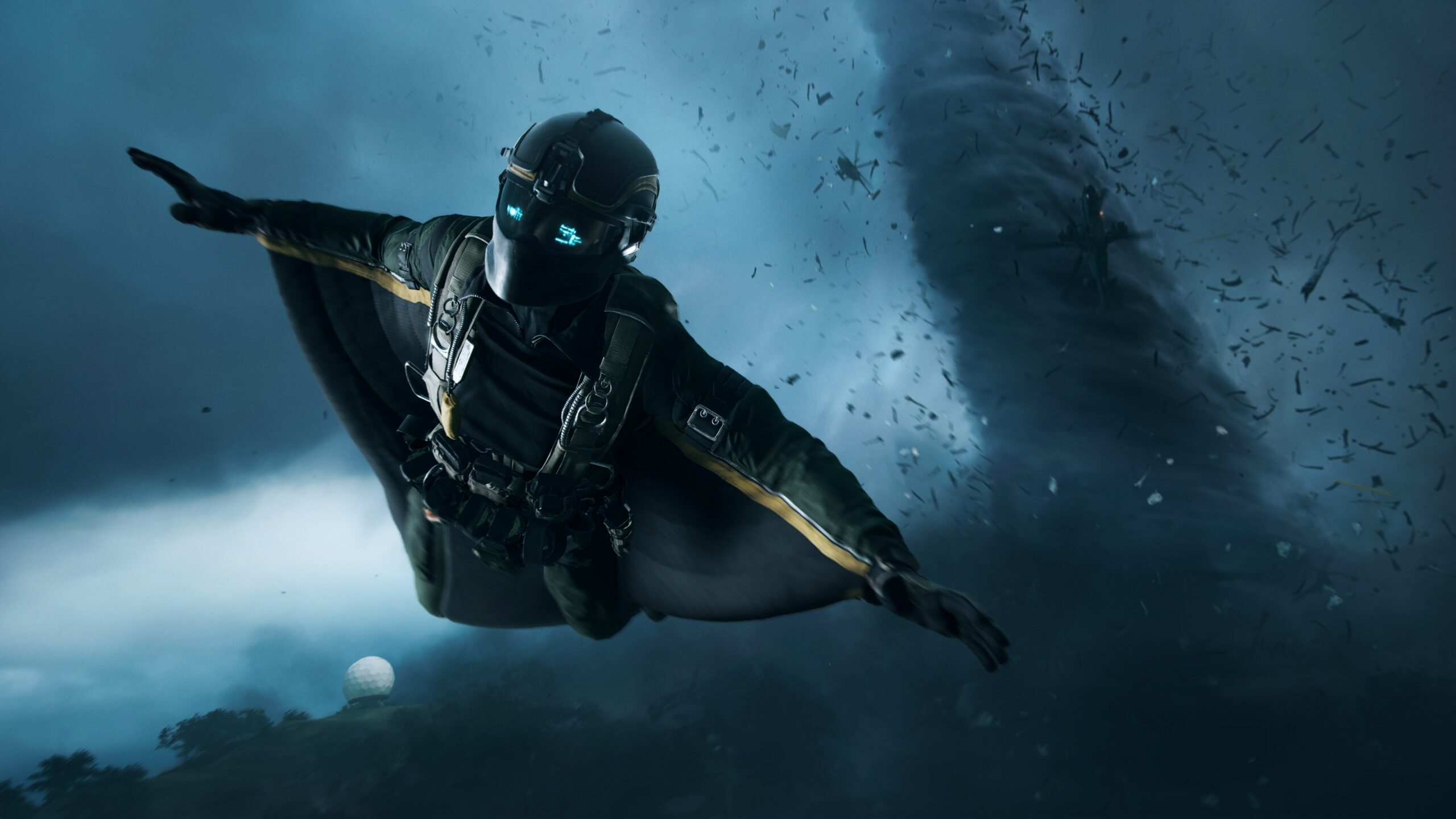 The developers didn't spend too much time talking about the game's destructibility, other than to say that we can expect the usual level of destructible environments in Battlefield 2042, including destructible terrain, which they are calling ground deformation. Additionally, some of the maps will feature Levolution style events; for instance, Orbital's rocket launch can go well or not. In the latter case, Daniel Berlin hinted that the surrounding area would be meaningfully affected.

This is perhaps one of the biggest changes brought to the existing formula by Battlefield 2042. Since its very inception, the franchise has always relied on a fairly regular class system.

This time around, DICE has clearly taken a cue from modern hero shooter games, perhaps in an attempt to help players identify with their character more than they could have with a no-name Assault or Medic soldier.

Specialists were, of course, still very much crafted after class types. The Canadian Webster McKay, for instance, is modeled after the Assault class and comes with the self-explanatory grappling hook specialty and the nimble trait, which means he's got improved agility when aiming down sights and using the ziplines. 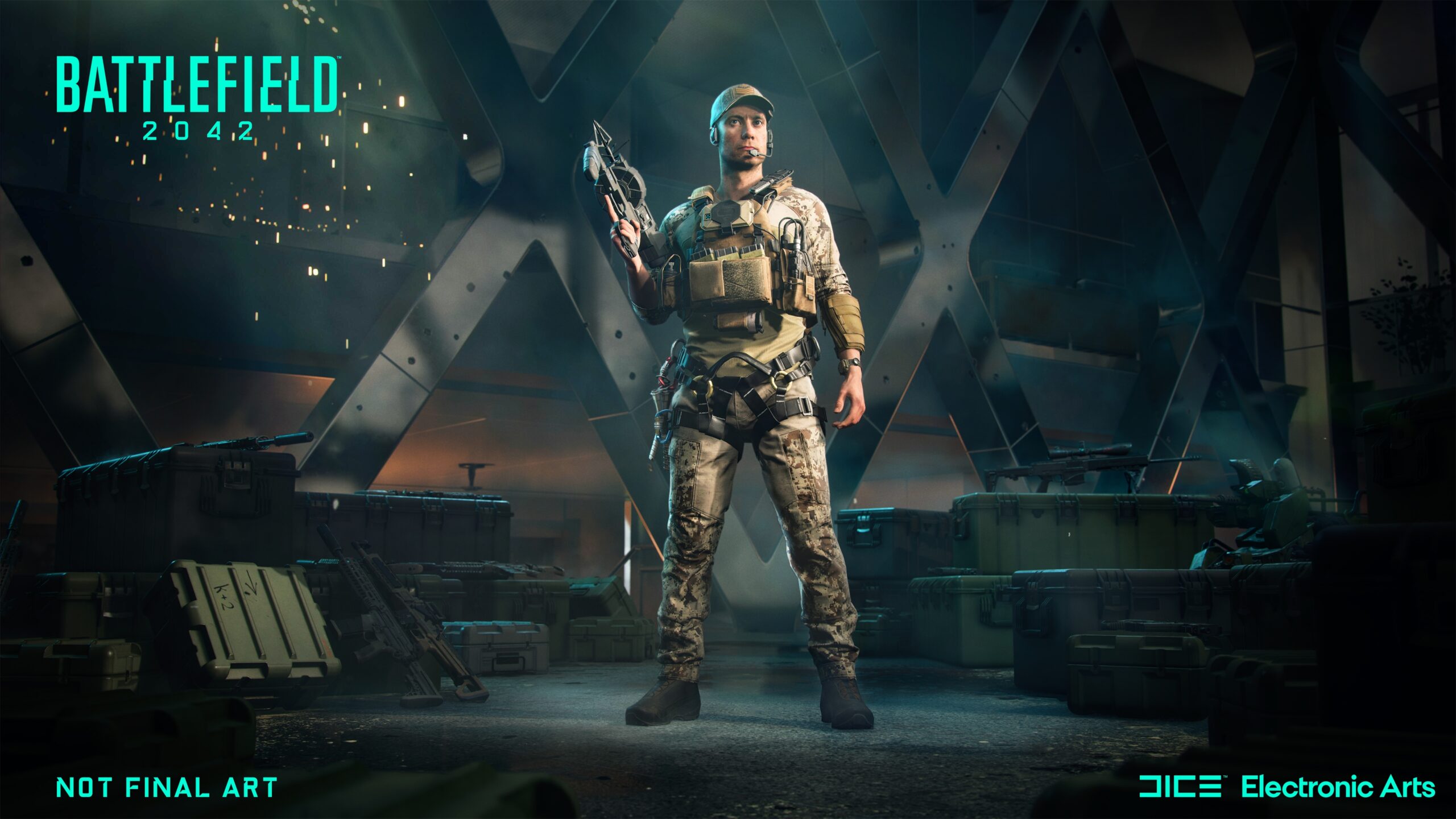 Then there's Maria Falk, the German Support character who can revive and heal allies from afar with her S21 Syrette Pistol (specialty) and revive anyone on the battlefield with full health, unlike her colleagues, thanks to the Combat Surgeon trait. 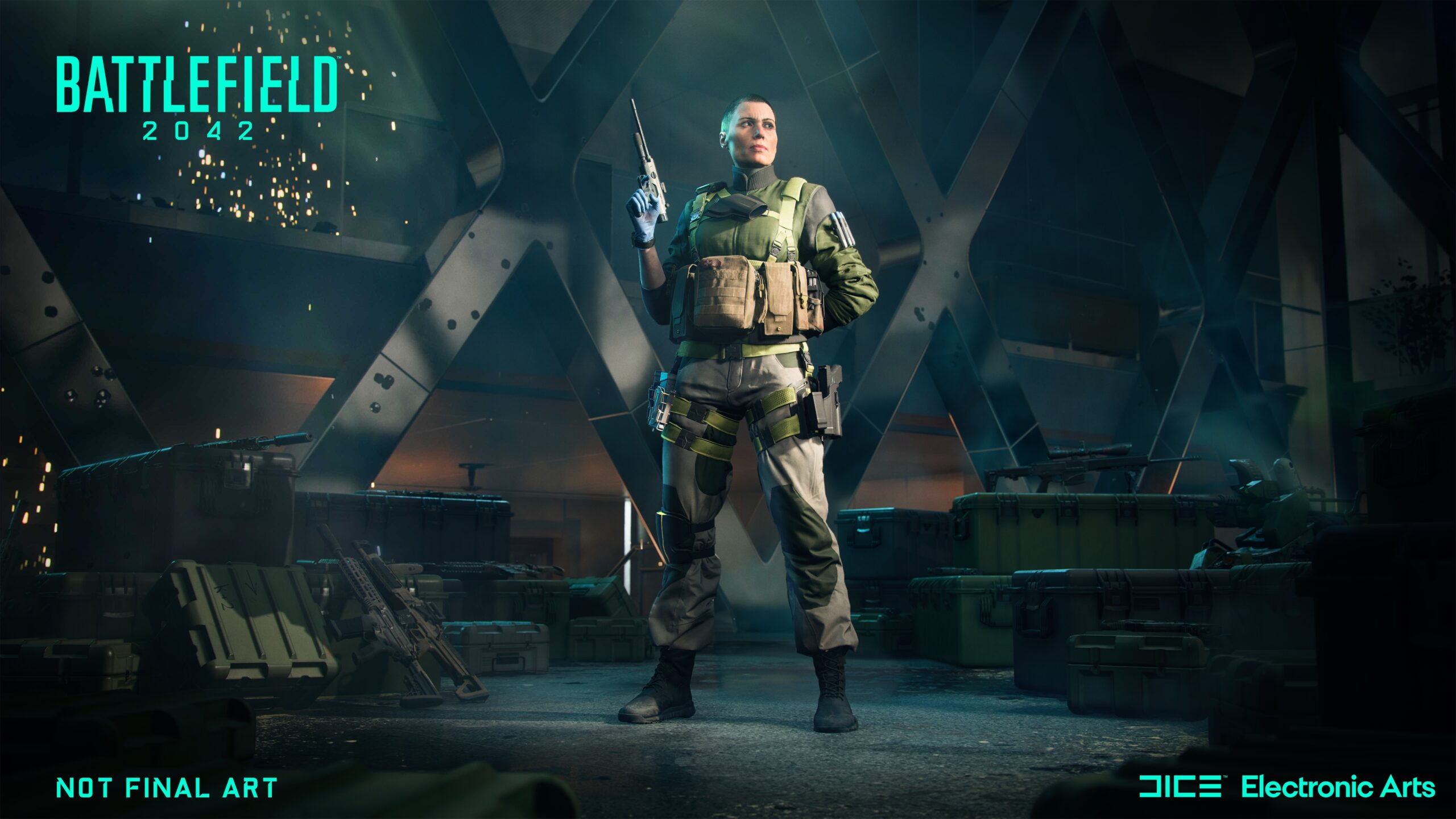 Hailing from Russia, Pyotr 'Boris' Guskovsky is an Engineer-type of Specialist capable of deploying an SG-36 Sentry Gun as his specialty. Fittingly, his trait is Sentry Operator: as long as he stays close to the automated turret, it'll be more efficient at both shooting and spotting. 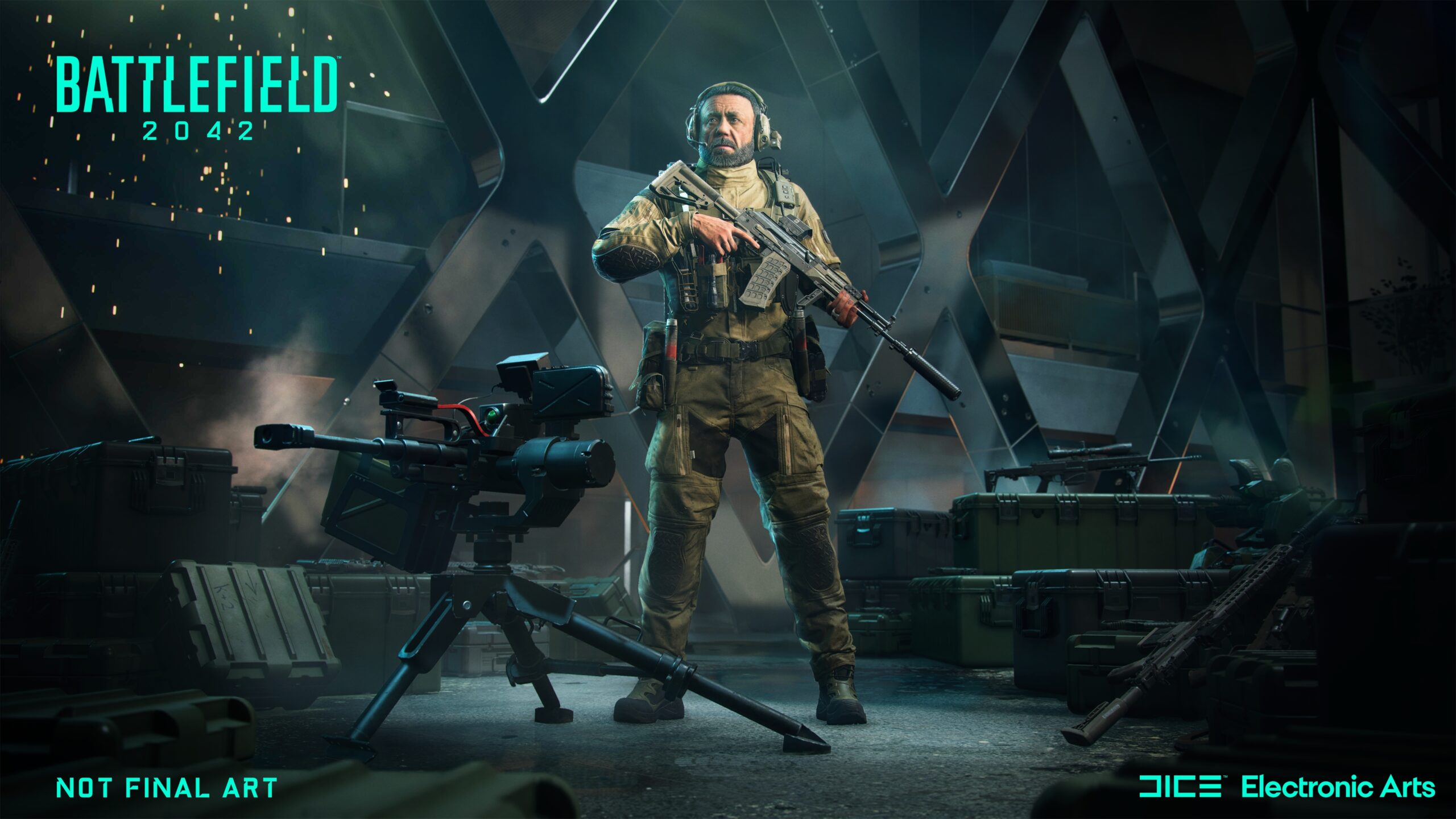 Last but not least for this character reveal, South African Specialist Wikus 'Casper' Van Daele is a Recon character equipped with an OV-P Recon Drone (specialty) and a movement sensor (trait). The drone can provide information to Casper and his team about the enemy positions, but it can also fire EMP darts that will disrupt enemy equipment, including the aforementioned Sentry Gun used by Boris. The movement sensor is pretty much what it sounds like: it can alert this Specialist to incoming threats, though the developers later made it clear that detection will depend on how fast the enemy is approaching. 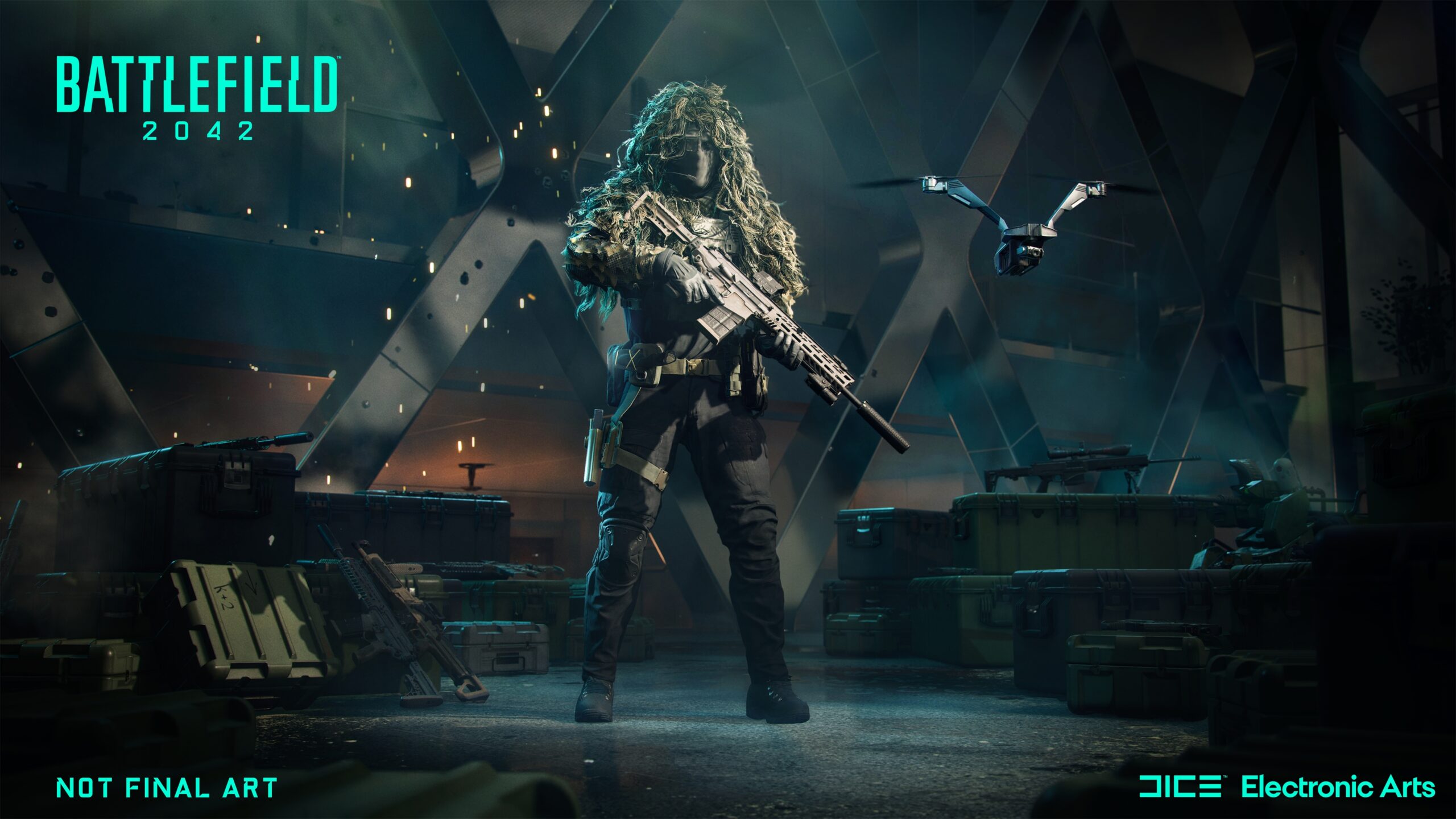 However, beyond their unique specialty and trait, all Specialists (there will be ten at launch) in Battlefield 2042 can equip any weapon they desire. This means that, for example, Casper isn't locked into using sniper rifles at all. The same goes for grenades and secondary gadgets, which can be picked regardless of the Specialist you've selected.

Vehicles Can Be Parachuted in Anywhere, at Any Time

Battlefield has always distinguished itself from most first-person shooters due to its focus on vehicles of all kinds, from land to sea and air. Battlefield 2042 doubles down on this core tenet by democratizing the availability of vehicles, which can be requested in real-time via a tablet and will be parachuted wherever you want on the map. Yes, this means vehicles can be dropped on top of unsuspecting foes as an unorthodox way to take them out; on the other hand, vehicles can also be shot down by the other team even while they're still in the air.

Moreover, the developers have now made sure that the full potential of vehicles will be available to those squads who actually fill all of the spots. From anti-air seats to spotter seats and gunner-type seats, every vehicle operator will play a vital role in maximizing efficiency.

Also, some vehicles will have the ability to drop mines to deal with any pursuers, which sounds admittedly pretty cool.

DICE intends to deliver more options in the hands of gamers while they're actually playing Battlefield 2042 instead of through the menus. The Plus system does exactly that, allowing you to customize your equipped weapons on the fly by changing scope, barrel, underbarrel, and ammo type. You'll probably want to do this only when there are no enemies in sight lest they catch you unprepared, but regardless, it's yet another tool in the players' arsenal.

Battle Pass Is Back, Though Gameplay Perks Are All in the Free Tier

Battlefield 2042 will use the Battle Pass system, as many live service games do these days. However, the developers stressed that all gameplay related unlockables will be in the free tier, while the premium tier is reserved for cosmetic items.

Four seasons have been confirmed for the first year, each coming with its own new specialist and Battle Pass. DICE also promised new locations and more 'fresh content' to be coming with these updates. 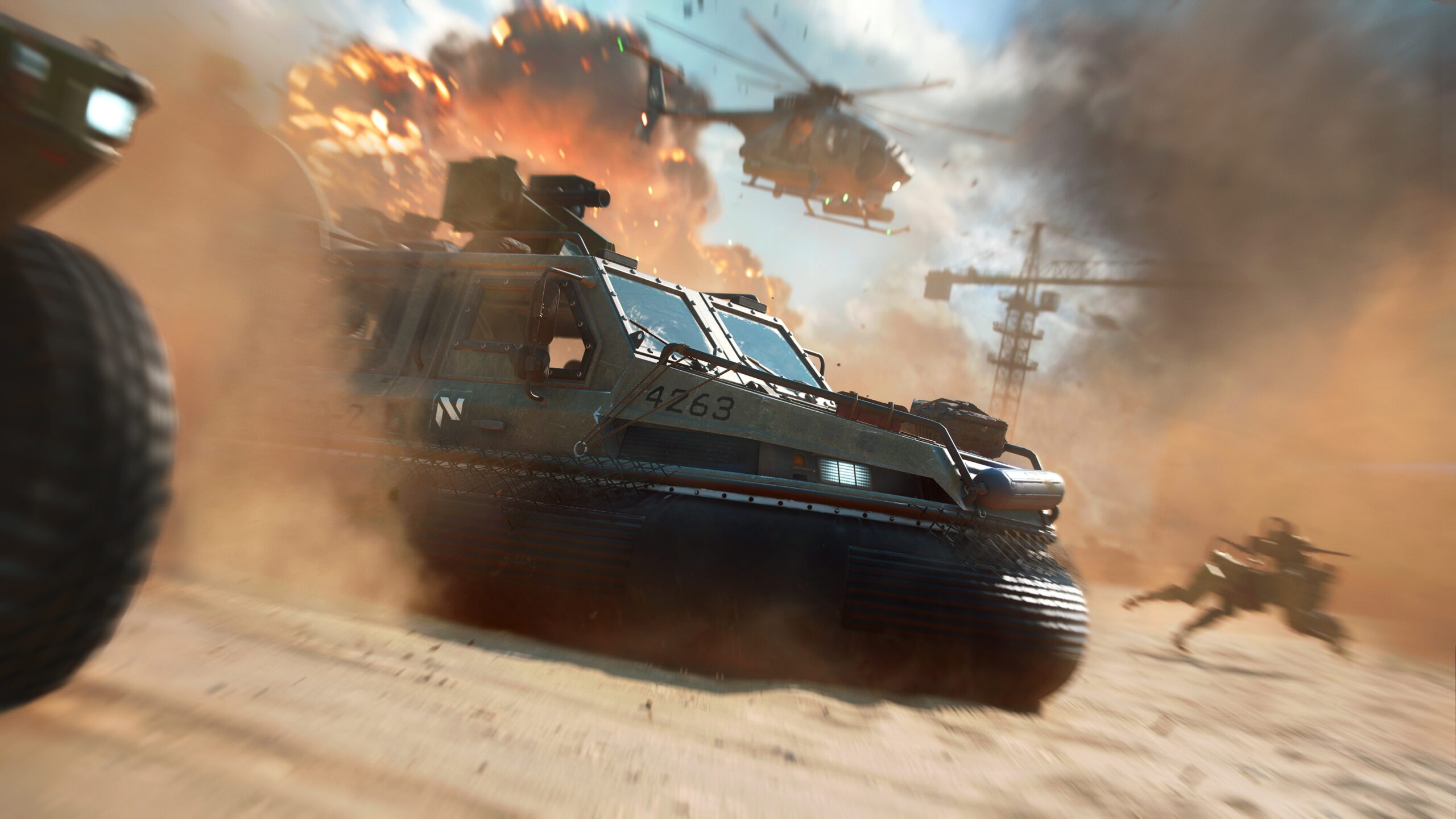 It's still early days and we can't comment on how these changes will play out until we'll get our hands on the game, but it certainly looks like DICE has spent these past three years attempting to shake the gameplay formula at its core. Battlefield 2042 seems poised to deliver the biggest and deepest multiplayer sandbox in the franchise yet; whether that'll be enough to steal the thunder from Call of Duty remains to be seen.