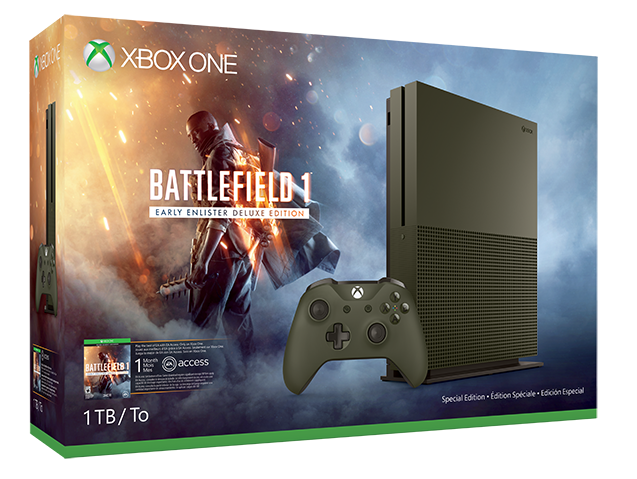 The news was announced on the official Xbox Wire alongside an announcement trailer, which can be viewed below:

This bundle will be priced at $299 USD, and will be available in the U.S., Canada, Australia, and New Zealand starting October 21 and in Europe starting October 13. The bundle comes with a full-game download of Battlefield 1 Standard Edition, a 500GB hard drive, and one month of EA Access.

This special edition bundle features a military green 1TB console with matching stand and controller, a full-game download of Battlefield 1 Early Enlister Deluxe Edition, the Hellfighter Pack, Red Baron Pack, Lawrence of Arabia Pack, a new visual appearance of the Behemoths, five Battlepacks and one month of EA Access for $349 USD. The Xbox One S Battlefield 1 Special Edition Bundle will be available in U.S., Canada, Australia, and New Zealand starting October 18 and in Europe starting October 13.

In the official blog post, Microsoft’s general manager of Xbox devices marketing , Matt Lapsen, writes to be “excited” with the new Xbox One S Battlefield 1 bundles

Today, we’re excited to announce the ultimate way for players to experience all-out war with a variety of exclusive Xbox One S Battlefield 1 Bundles. With these bundles, players can join a world of discovery and epic warfare through ever-changing multiplayer battles with up to 64 players on Xbox Live.

Battlefield 1 will be released on October 21 for Xbox One, PC, and PS4.