EA has provided additional details about the Battlefield 1 Apocalypse DLC which will release next month for premium pass owners.

Earlier this week we already covered the upcoming new content and features coming to the game this year, and now we’ve got the full details about the upcoming fourth expansion for the WW1 shooter.

Battlefield 1 Apocalypse DLC Update 1.19 Being Deployed; Clocks in at 7.8GB on PS4

“WITH NO END IN SIGHT, ENTER A LIVING HELL AND PARTICIPATE IN THE MOST BRUTAL BATTLES OF THE CATACLYSMIC GREAT WAR. COMING FOR BATTLEFIELD 1 PREMIUM PASS OWNERS IN FEBRUARY”, the official Battlefield 1 blog reads.

Five new maps will be added through the Apocalypse expansion, including Passchendaele, Caporetto, River Somme, Razor’s Edge, and London Calling.

"Once the quiet countryside of Belgium, now a nightmarish landscape of blood and mud. Claw your way across the devastated landscape and huddle for cover in dugouts and tattered ruins." 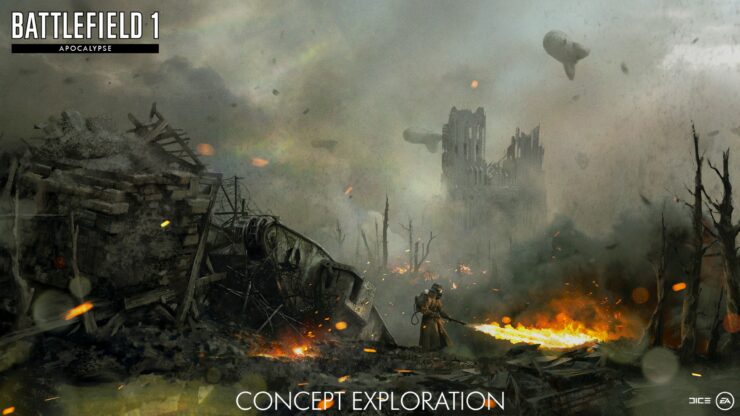 "Fight in mountain trenches near the Isonzo River as the Austro-Hungarians face off with the Italian army in an uphill climb."

"The scenic wheat fields by the Somme river transform into hell on earth from devastating artillery barrages."

"Engage in frantic dogfights among snowy peaks, as British and German aces fight for control on this intense map."

"With your fellow knights of the sky, join the aerial clashes high above the British capital in the new Air Assault game mode."

In addition to the new maps, new weapons are being added to the game, including the meat cleaver, the prybar, and the RSC SMG. New gadgets also make their entrance in Apocalypse alongside the new Hansa Brandenburg GI and Airco DH10 aircraft bombers.

Players will be able to test out their flying and gunning skills in the new Air Assault game mode, in which “planes collide in a fury of dogfights that could include a climactic face-off with Airships.”

Last but not least, the new Afflictions specialization type will be introduced alongside new assignments. For the full details, check out the expansion’s blog page.

Battlefield 1 is available now for PC and consoles. In case you're interested in a PC performance review, check it out right here.