Batman Arkham Knight on PC was an unoptimized mess. Just as the game was actually released, Rocksteady updated the game requirements of all AMD GPUs, increasing the minimum memory required from 2GB to 3GB whereas no such change was made to gamers who had NVIDIA GPUs. With the games' release, reports started flooding in and gamers made their way onto Batman Arkham Knight forums. The game was capped at 30 fps and for good reason. Gamers reported all sorts of problems including lags stuttering and crashes. It was so bad that Rocksteady suspended sales of Batman Arkham Knight to work on the games' bugs on the PC port. We're still not sure when the games' PC will make its way back onto the market. 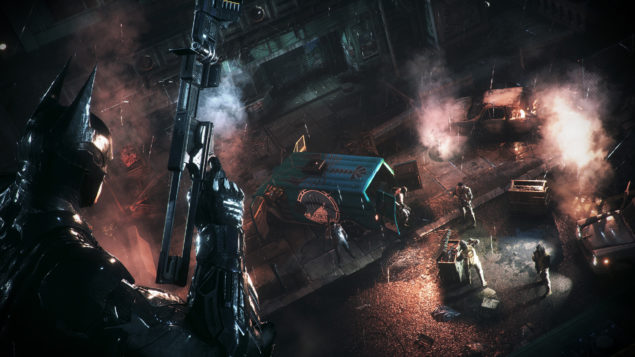 Soon afterwards AMD and NVIDIA released new drivers specifically targeting improvements on Batman Arkham and the games' first PC patch has just been released aswell. We hope that it will improve the performance of the game further but lets have a look at the different GPU benchmarks as tested by Techspot.

Techspot benchmarked Batman Arkham Knight using "Fraps" as its inbuilt benchmark mode was quite unstable. Naturally, the game was benchmarked at 3 resolutions; 1080p, 1440p and 2160p (4K) using the highest settings allowed in-game. Enhanced rain and enhanced light shafts were enabled, while the test with interactive paper debris and interactive smoke/fog  could out be carried out as they cannot be used with AMD graphics cards.

The game was locked at 30fps but a slight modification with a configuration file helped us cross that hurdle.

At the top we can see that NVIDIA GPUs take over with the help of GTX 980 Ti followed by R9 390X  but no way near that close. One noted performance is of the R9 290 which performs exceptionally well in an all round result making it one of the best GPUs by value for money in Batman Arkham 1080p category.

We can also see a trend of minimum fps being jammed at around 50 fps which might just be the limitation of the processor i7-5960X.  Nearing the bottom we can see 2 odd one's out i.e. the R9 285 and the R9 380 which have performed below par relative to their respective expectations.

At 1440p we can see that the GTX 780 was the first graphic card to keeps the minimum fps above 30 and the rest can be categorized as the elite series cards. The R9 290 outperformed the R9 390 again in terms od value for money with some fantastic results where the average is just 1fps down for the 290. The R9 390X fell just short of the GTX 980 and just as before, the GTX 980 Ti leads the way for graphic cards. 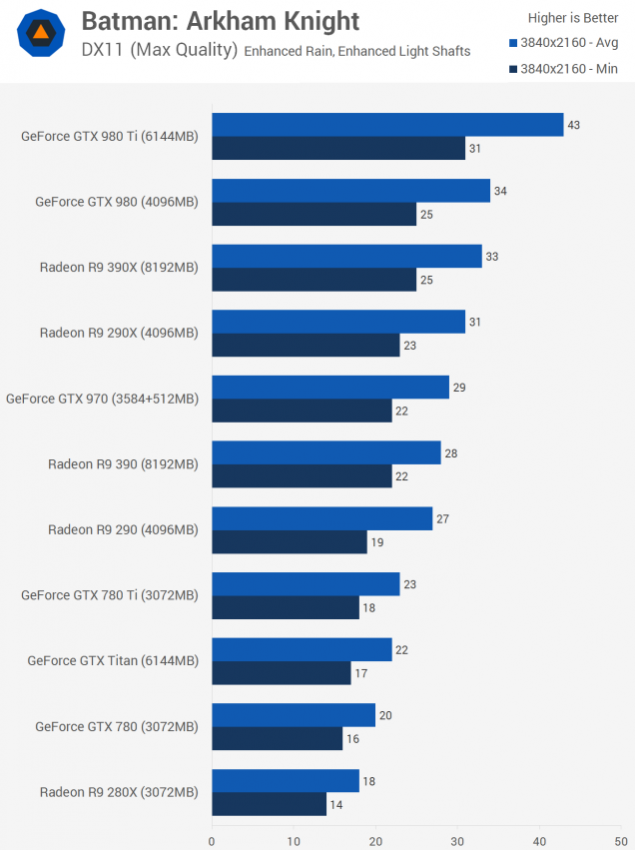 A much shorter list for the 4K playability where even the GX 980's minimum fps went below 30 with the R9 390X side by side. We can see that the R9 390X and 290X  were in competition despite double the VRAM in the 390X. Anything below the R9 290 was unacceptable in terms of minimum fps for the 4k performance.