The last Batman Arkham Knight trailer titled "Those Who Follow You" showcased Catwoman, Nightwing, Robin and Azrael making a return to the Arkham universe and introduced the new "Dual Play" feature which has the Dark Knight teaming up with one of his allies to deliver devastating tag-team attacks on a variety of opponents. The trailer also included a scene that featured a theater displaying the text "Johnny Charisma Live!" 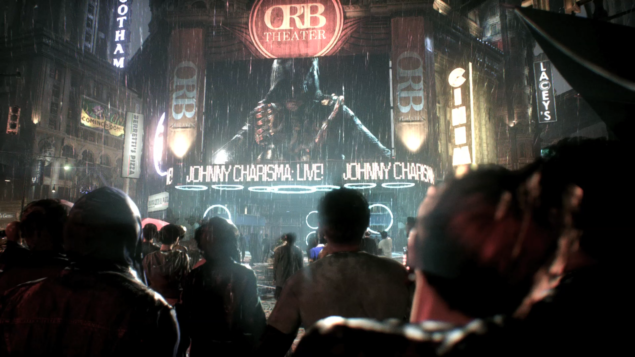 Johnny Charisma is an unknown name to us, but checking out the letters that make up the sentence reveal something really interesting. JOHNNY CHARISMA LIVE or JO HNNY CHA R IS M A LIVE.

JOCHA IS ALIVE, is certainly hinting at something and as I have previously suggested, there is some possibility that the Joker could indeed be making a return in Batman Arkham Knight in flashbacks or hallucinations caused by the Scarecrow's fear gas or any other hallucinogenic drugs that he might be using on Batman throughout the game.

Of course, there is always the possibility that the prince of crime could be making a return in other ways, so unless Rocksteady gives any further clues before the release of Arkham Knight, we would have to wait to find out for ourselves.

Although it would be nice if the Joker made a return in some form, as the Batman universe feels a bit empty without him. Harley-Quinn appears to be making a worthy presence in Arkham Knight and seems to be up to the task of replacing her beau as the new crime royalty.

Batman: Arkham Knight is shaping up to be the best adventure of the caped crusader yet.

Batman: Arkham Knight PC System Requirements were revealed, and they do seem pretty demanding. Sefton Hill, Game Director of Batman: Arkham Knight and co-founder of Rocksteady Games recently confirmed on Twitter that the game will definitely be releasing on June 23 2015, promising no more delays. Batman Arkham Knight is set to release for the PlayStation 4, Xbox One and PC. We will bring you any new information prior to its release as soon as it becomes available. Be sure to check out our previous Batman: Arkham Knight coverage for more information on the game, here and here.